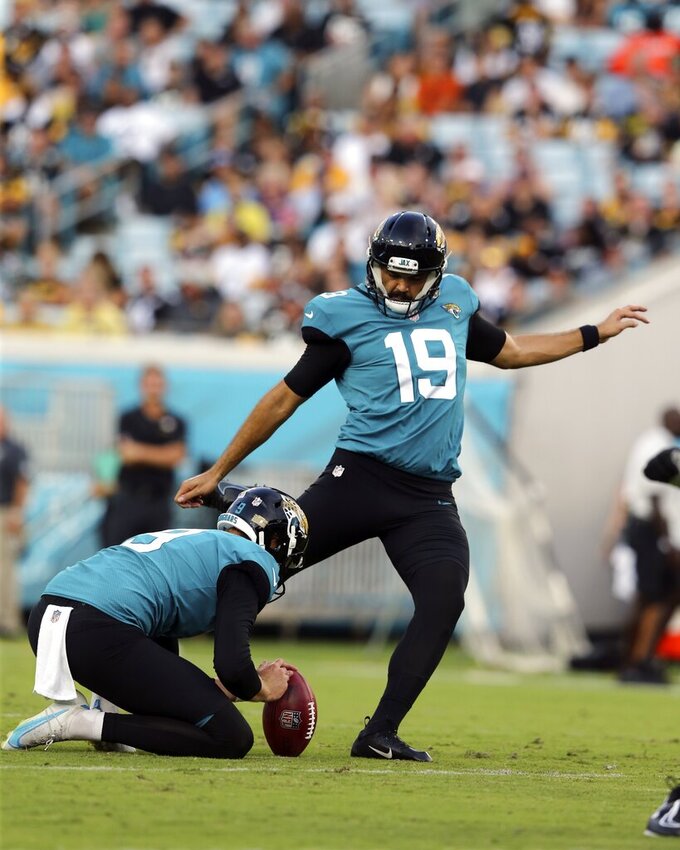 The Jaguars claimed James McCourt off waivers from the Los Angeles Chargers on Tuesday and cut Ryan Santoso. They previously gave Andrew Mevis and Elliott Fry shots at the job before parting with both.

McCourt will join his new teammates in Atlanta for two days of joint practices with the Falcons. The teams wrap up the preseason Saturday at Mercedes Benz Stadium. McCourt likely will need to be impressive all week to secure the job for the Sept. 11 season opener at Washington.

Born in Ireland, McCourt set an Illinois record by making eight field goals of 50 yards or longer in three years as the team’s kicker. He connected on 18 of 23 attempts in 2021, including four from 50 yards or beyond.

Santoso missed three of four attempts from beyond 50 in three exhibitions.

Pederson expressed little concern for the team's unsettled kicking situation with the season a little more than two weeks away. He recalled trying out six kickers before Philadelphia's 2017 season opener and then choosing Jake Elliott, who ended up being the guy through the Super Bowl.

“I’ve had some experience there,” Pederson quipped.

The Jaguars cut Luton last week. With starter Trevor Lawrence not expected to play against the Falcons and backup C.J. Beathard still dealing with a groin injury, Luton and E.J. Perry are expected to get the bulk of the work in the preseason finale.