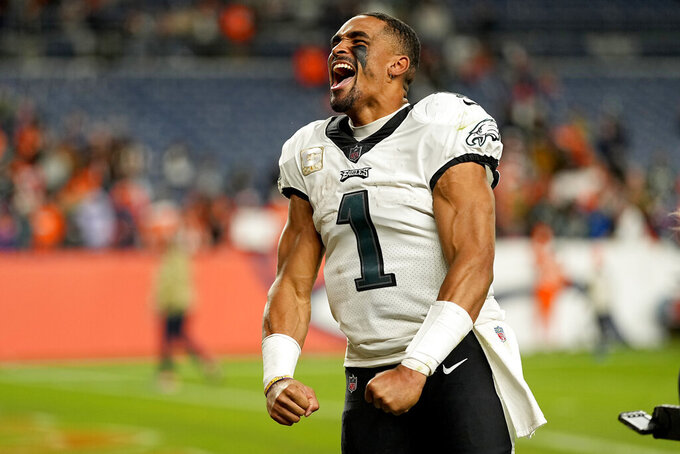 BETTING LINE: Eagles by 2, according to FanDuel SportsBook.

TURNOVER DIFFERENTIAL: Saints plus-5; Eagles plus-1.

SAINTS PLAYER TO WATCH: DE Marcus Davenport had two sacks against Tennessee last week and a sack against Atlanta two weeks ago.

EAGLES PLAYER TO WATCH: RB Miles Sanders returns after missing three games with an ankle injury. The run game was excellent with Jordan Howard and Boston Scott filling in during Sanders’ absence.

KEY MATCHUP: The Saints rank first in run defense, allowing 72.9 yards per game. The Eagles are third in rushing, averaging 144.3 yards per game. Led by dual-threat QB Jalen Hurts and Howard and Scott, the Eagles surpassed 175 yards rushing in three straight games, including 200-plus in both of their victories. Overall, they have 626 yards rushing in the past three games, an average of 208.7 per contest.

SERIES NOTES: Hurts led the Eagles to a shocking upset over New Orleans last year in his first career start, but the Saints have dominated the series in recent years, winning five of the previous six games, including two in the playoffs.

STATS AND STUFF: Saints coach Sean Payton spent part of his childhood in the Philadelphia area and was quarterbacks coach for the Eagles in 1997-98. ... Payton, hired by New Orleans in 2006 and now in his 15th season (he was suspended in 2012) is the longest-tenured head coach in the NFC and second in the NFL behind New England’s Bill Belichick. ... QB Trevor Siemian passed for 298 yards and two TDs with no INTs for a 104.8 rating in Week 10. .... Kamara needs one reception to surpass Roger Craig (358) for most catches by a running back in his first five NFL seasons. ... RB Mark Ingram had 108 scrimmage yards (61 receiving, 47 rushing) and his second TD rushing of the season last week and became the Saints’ all-time leader in yards rushing (6,124). ... WR Tre’Quan Smith had his second TD receiving of the season last week. ... WR Marquez Callaway had his fifth TD receiving of this season against Tennessee. ... WR Deonte Harris led the Saints with a career-high 84 yards receiving in Week 10. ... DE Cameron Jordan has a sack in three of his past four games. ... CB Marshon Lattimore has 65 passes defensed since 2017, tied for second most in the NFL. ... S Malcolm Jenkins had 58 passes defensed, 11 interceptions and 11 forced fumbles in 96 games with Philadelphia from 2014-19. ... The Eagles are the only team to score 30-plus points while allowing 13 or fewer points in three games this season. ... Hurts is tied for the second-most multi-passing TD games through his first 14 career starts in team history with six behind Sonny Jurgensen (eight). Hurts has 50-plus rushing yards in four consecutive games, marking the first time an Eagles QB has done so since Michael Vick in 2011. ... Eagles RB Scott prepped at Zachary (La.) HS, played at Louisiana Tech and was a sixth-round draft pick by the Saints in 2018, spending the majority of his rookie season with New Orleans. ... CB Darius Slay had an 82-yard fumble return for a score last week, his second TD this season. ... S K’Von Wallace blocked a 22-yard field goal against Denver.