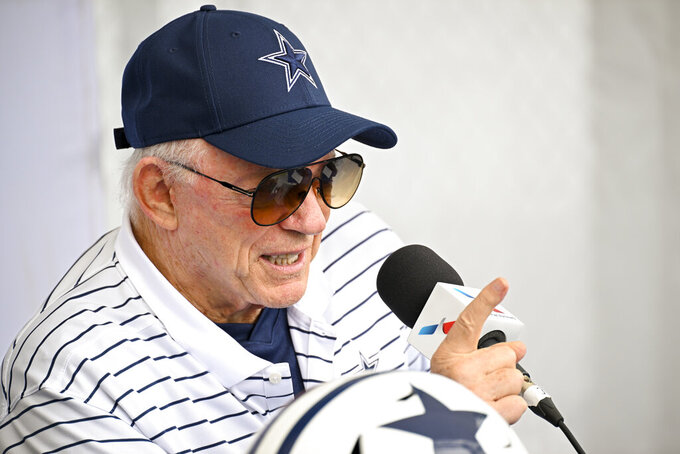 OXNARD, Calif. (AP) — Describing himself as playing a game of poker, Jerry Jones acknowledged he had options for who would be the head coach of the Dallas Cowboys this season.

In retaining Mike McCarthy for a third year, Jones decided the hand he held was worth playing a little longer.

“We won 12 games last year. I couldn’t live with myself if I didn’t get a little bit of feel good out of those 12 games," Jones said. “That’s not enough. But it’s enough to go again.”

Jones, the Cowboys' owner and general manager, used the opening statement of a news conference Tuesday ahead of training camp to defend McCarthy following offseason speculation about his job security.

“I want to be real clear. He wouldn’t be sitting here today if I didn’t think he was the man to lead this team to a Super Bowl. He would not be, and I have choices. So that’s not meant to be insensitive to anybody. That’s a fact,” Jones said.

McCarthy led the Cowboys to a 12-5 record, their best mark since 2016, and the NFC East title this past season before losing 23-17 to the San Francisco 49ers in a wild-card playoff game at home. The chaotic nature of that defeat, in which Dallas ran out of time before being able to attempt a final play from the San Francisco 24-yard line following quarterback Dak Prescott’s designed run, and a plethora of available candidates, including offensive coordinator Kellen Moore, defensive coordinator Dan Quinn and former New Orleans Saints coach Sean Payton, resulted in a torrent of conjecture about McCarthy’s future.

Jones believes the Cowboys can continue to build on the regular-season success McCarthy had last year. That would represent significant progress for a franchise that has not made the postseason in consecutive years under the same coach since Chan Gailey in 1998-99.

“I think we’re in better shape today to make a run at it than when we were sitting here this time last year,” Jones said.

“I obviously have the opportunity to meet with Jerry in the GM, the head coach realm, and our conversations are about partnership, direction, vision,” McCarthy said. “But also I do have the opportunity to speak to Jerry as the owner to the head coach. ... I think it just really is in line with our conversations, and that’s really where my focus has always been is on this partnership.”

McCarthy signed a five-year contract in January 2020. He went 18-15 in his first two seasons with the Cowboys. He is 143-92-2 overall in 15 seasons as an NFL head coach, including a Super Bowl title with the Green Bay Packers at the end of the 2010 season after they beat Pittsburgh at the home stadium of the Cowboys.

However, with his typical flamboyance, Jones offered reminders that how he feels about McCarthy and the team could be different in a few months.

Asked how he communicates the urgency to return to a Super Bowl to the organization, Jones replied: “Told ’em I got a birthday coming up here real quick. I don’t have time to have a bad time. It ain’t on my schedule.”

Following some chuckles from assembled reporters, the 79-year-old Jones said, “I’m not so sure that’s a joke. That’s the way it is.”

NOTES: Jones said there has been no guidance if CB Kelvin Joseph will face discipline under the NFL’s personal conduct policy. Joseph was a passenger in a sport utility vehicle from which a man was fatally shot in Dallas in March, but he was cleared of wrongdoing and will not face charges. ... Chief operating officer Stephen Jones expressed optimism that a long-term contract extension with TE Dalton Schultz will be reached. Schultz will play this season on the franchise tag worth $10.9 million after the sides were unable to negotiate a new deal by the July 15 deadline.