Jets back to drawing board after embarrassing Cincy showing 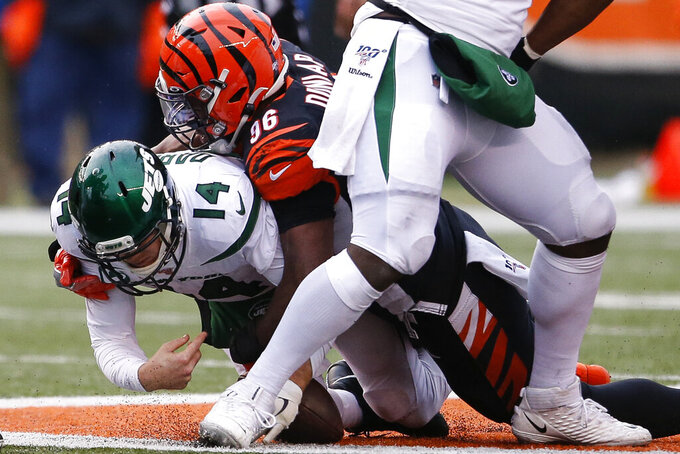 NEW YORK (AP) — The New York Jets were feeling pretty good about themselves, riding a three-game winning streak into winless Cincinnati and hoping to keep the positive momentum going.

Then, just like that, it was all gone — in one embarrassing poof.

A 22-6 loss to the Bengals undermined all the progress the Jets appeared to be building on during the last few weeks and brought them right back to being laughingstocks, as they were a month earlier when they lost to the then-winless Miami Dolphins.

In fact, New York became the first team in NFL history to lose to two teams that were 0-7 or worse in the same season.

Not exactly the mark of a team headed in the right direction.

“We had a good game plan coming in,” defensive end Henry Anderson insisted afterward. “We didn’t do a good job executing. We left a lot of plays out there and had a lot of penalties. It hurts. We felt like we were starting to get into a rhythm.”

The Jets had scored 34 points in each of their last three games, all victories. Against the worst-ranked defense of the Bengals, they managed just two field goals by Sam Ficken.

Coach Adam Gase warned all week that Andy Dalton would be a challenge in his return as Cincinnati’s starting quarterback. Several of his players also talked about how the Bengals’ overall record and rankings on defense were deceiving.

Apparently, they didn’t heed their own warnings.

“We didn’t play well,” Gase said. “Flipping the field killed us. The fact that we stayed backed up the whole time, we never gave our defense a chance to really, really tee off on these guys. We just didn’t do a very good job on offense.”

Sam Darnold had very little time to throw, going 28 of 48 for 239 yards with four sacks. He was undone by several dropped passes. New York also had a couple of long gains nullified by penalties, and the Jets were called for 10 of them overall.

“We didn’t play well as a group,” Gase said. “We didn’t do enough to give ourselves a chance to win.”

Gase and his players denied the notion the Jets came in flat and were unprepared for a team much hungrier than they were for a win.

The run defense. New York still has the NFL’s stingiest unit, allowing only 75.2 yards per game on the ground. The Bengals gained only 44 against the Jets, who have allowed just one individual 100-yard rusher all season: Dallas’ Ezekiel Elliott in Week 6.

The play-calling. The Jets went to Cincinnati to face the NFL’s worst run defense yet never established a ground game.

Bell finished with just 32 yards on 10 carries and still hasn’t gained more than 70 in a game this season. New York had 62 overall yards on 17 attempts, a curious lack of commitment to the run game when it appeared the perfect opportunity to get it in gear.

“We got behind,” Gase said, “and, next thing you know, we’re throwing it all the time.”

Robby Anderson. After a mostly quiet season, the Jets’ No. 1 wide receiver is starting to get hot. He had seven catches for 101 yards against Cincinnati, including several tough grabs. Anderson did have one glitch on the day when he was unable to come up with a slightly underthrown pass in the end zone that would’ve been a touchdown on New York’s opening drive. But he has 11 receptions for 187 yards and a TD in his last two games.

Offensive line. The big guys up front had been much improved the last few games, coinciding with the return of left tackle Kelvin Beachum from an ankle injury. Even Beachum struggled mightily in Cincy, but he wasn’t alone. The offensive line committed seven of the Jets’ 10 penalties: three by Beachum, including a holding call that resulted in a safety; two on guard Tom Compton; and one each on right tackle Brandon Shell and center Jonotthan Harrison.

Safety Jamal Adams has a sprained left ankle that could sideline him for at least this week’s game against Miami. Gase called it a “legit week-to-week” injury. ... Darnold is OK despite tweaking a knee and having sore ribs. ... Cornerback Brian Poole is in the concussion protocol.

0 — As in no trips into the red zone. Actually, the Jets did get inside the Bengals 20 on a 23-yard catch-and-run by Bilal Powell in the second quarter that put the ball at the 17 — but it was negated by an illegal block-above-the-waist penalty on Beachum.

The Jets have an opportunity to put the pitiful loss to the Bengals behind them while also gaining a measure of revenge against Miami. New York opened as a 6-point favorite at home, but the Dolphins are coming off a 37-31 victory over Philadelphia.