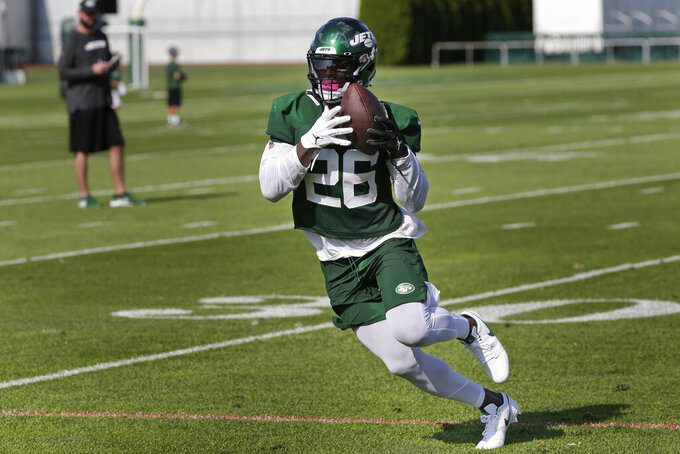 FLORHAM PARK, N.J. (AP) — Le'Veon Bell has a fantasy tip for this season: Pick him.

First, though, the New York Jets running back is sorry to the frustrated people who drafted him in their leagues last year — and got a big, fat zero as he sat out in a contract dispute with the Pittsburgh Steelers.

"This is loooong overdue!!" Bell wrote on Twitter on Monday. "But I want to take a moment to apologize to all the fantasy owners who picked me last year, I'm sorry I couldn't pull through for y'all...but trust me, this year's about to be wayyyy different.

Bell also included a pair of purple smiling devil faces in his post.

The running back had been one of the NFL's most productive players on the field and in fantasy football before his contract situation reached a head last year. Bell led the league with an eye-popping 406 touches in 2017, making him an absolute superstar in point-per-reception fantasy leagues that put value on both yards rushing and catches.

He rushed for 5,336 yards and 35 touchdowns in five seasons with Pittsburgh, and caught 312 passes for 2,660 yards and seven scores as one of the league's most versatile and dangerous offensive players.

Bell signed a four-year, $52.5 million contract with the Jets in March, and is expected to be a major factor in Adam Gase's offense in New York. Through five training camp practices, the running back has shown no signs of rust while also flashing at times with some impressive runs.

Now, it's up to fantasy owners as to whether they'll take his advice and click on Bell's name in the first round on draft day.