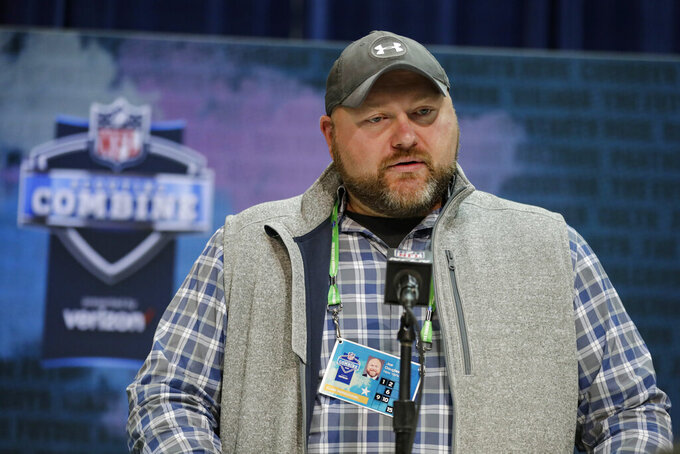 FILE - In this Feb. 25, 2020, file photo, New York Jets general manager Joe Douglas speaks during a news conference at the NFL football scouting combine in Indianapolis. Douglas is not going to start patting himself on the back after a busy offseason. Douglas made several moves to help the team get better, but he knows they're still very much a work in progress. (AP Photo/Michael Conroy, File)

NEW YORK (AP) — Joe Douglas is not about to start patting himself on the back after a busy offseason.

Sure, the New York Jets general manager made several moves to help the team get better. He also knows they're still very much a work in progress.

“I’m not going to be happy until we win the Super Bowl,” Douglas declared Monday, echoing what every NFL GM says around this time of year.

He set out after last season to fix one area of the Jets that was a glaring weakness a year ago: the shaky offensive line. Douglas signed center Connor McGovern, tackle George Fant and guard Greg Van Roten in free agency, and drafted tackle Mekhi Becton with the No. 11 pick.

Paired with returning left guard Alex Lewis, the starting unit has had to try to quickly mesh on the field after doing so through remote meetings in the offseason because of the coronavirus pandemic.

What Douglas witnessed this summer was a small victory, albeit without preseason games.

“I will say that I’ve been impressed with the professionalism and the maturity and the mentality that our offensive line has shown through training camp,” Douglas said.

That's as close to a touchdown dance as you'll hear from Douglas these days, though.

He was in a tough spot when he was hired in June 2019 after Mike Maccagnan was abruptly fired as general manager. With Adam Gase already in place as coach, Douglas tried to make improvements late in the offseason and camp — including acquiring Lewis from Baltimore — but only now has he been able to truly begin putting his stamp on the makeup of the Jets' roster.

“I feel like we’ve been on the same page in getting the right type of people in this building, in this locker room, and I think you’re starting to see that come to fruition this camp.”

Still, outside expectations are generally low entering this season. Many think the Jets will take a step back from last year's 7-9 finish. Critics cite a perceived lack of overall talent, with quarterback Sam Darnold and running backs Le'Veon Bell and Frank Gore being the most recognizable names on the active roster.

“I can tell you that there’s some guys on this team that may not be household names, but they’re good football players,” Douglas said. “Their mission is to go out and become a household name — and I’m excited.”

Naysayers will also point to star safety Jamal Adams being traded to Seattle, and playmaking linebacker C.J. Mosley opting out of the season over family health concerns. Oh, and the wide receivers group isn't flashy. And there are no big-time pass rushers.

Douglas has some spunk, fitting for a franchise whose fanbase hasn't seen its team in the playoffs since the 2010 season. And, of course, the Jets haven't been to the Super Bowl since the glory days of Broadway Joe to cap the 1968 season.

Douglas also has seen what it takes to build a consistent winner, from his time under Ozzie Newsome in Baltimore to more recently working with Howie Roseman in Philadelphia. He knows quick fixes by doling out big-money contracts don't necessarily lead to sustained success.

Many observers linked the likes of big-name free agents Jadeveon Clowney, Yannick Ngakoue and Logan Ryan to the Jets to help fill obvious needs. When New York didn't aggressively pursue them, some wondered if Douglas was being hamstrung by ownership — something the GM vehemently denied.

The Jets have plenty of salary cap space remaining this year, but Douglas is content to roll it over to next season — a prudent move considering the uncertainty caused by the pandemic over what the cap amount will be.

“We have a vision, we have a game plan of what we’re trying to accomplish,” Douglas said. “We want to have the flexibility so when the right player presents itself, the right opportunity, we are going to be aggressive. I’m sure it may seem like we’re not doing that right now, but we do have a vision.”

And, Douglas won't celebrate until he sees it all the way through.

For the Jets and their fans, that means delivering another long-elusive Lombardi Trophy to the franchise. And it starts Sunday with the season opener at Buffalo.

“I know that there’s a lot of hungry guys," Douglas said, "that want to go out there and just prove a lot of people wrong.”