Jets kicker Ammendola has stunning debut as punter in pinch 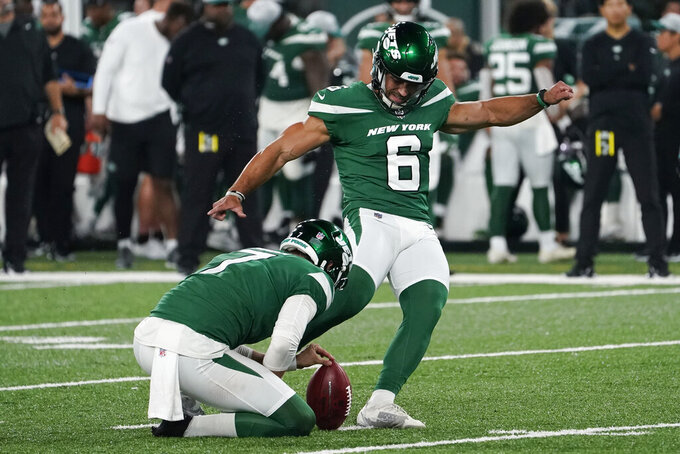 Not a bad punt, right?

Well, the fact the New York Jets rookie placekicker hadn't previously attempted a punt in a game — not college, not high school, not ever — made it even more impressive. And because of an injury to punter Braden Mann, Ammendola had to handle those duties the rest of the game and finished with a solid 48.5-yard average.

“I've actually never punted, which is the craziest thing,” a smiling Ammendola said. "It was a whirlwind, just kind of going in there. You never want to see a teammate go down, especially my punter, my holder.

“But, you know, sometimes you've just kind of got to step in and just go about it.”

Mann sprained his left knee — his plant leg — when he was rolled into during his first punt in the first quarter of New York's 19-14 loss at Carolina on Sunday. With the punter done for the day and wearing a heavy brace on his leg, the Jets turned to Ammendola.

And he did more than just fill in. He was stunningly solid.

Next came kicks of 46, 37, 57 and 42 yards, helping keep the Jets out of potentially awful field position throughout the day. In a weird twist, Ammendola never got a chance to try a field goal or extra point — the main reason he's on the team, of course — in his NFL debut.

“Terrific job by him,” coach Robert Saleh said. “I thought he punted the heck out of it for not really practicing it. Showed no pale face or anything. Just stepped right in and did a really good job. Hats off to him. Wish we could have got him a field goal opportunity in there somewhere, but thought he did a great job.”

The punting gig was just a temporary thing, though, for the strong-legged, 24-year-old Ammendola. With Mann placed on injured reserve and expected to be sidelined four to six weeks, the Jets signed veteran punter Thomas Morstead, rather than have Ammendola pull double duty again.

Not that he would be opposed to it. But he wouldn't necessarily call himself an NFL-caliber punter. Not yet, anyway.

“It definitely takes a lot to be an NFL specialist, for sure, especially a punter,” Ammendola said. “Consistency is probably the word I'd use as far as being a punter. I definitely think if I could really focus just on punting in the offseason, maybe over time, within a few years. But no, I don't think I could do it right just this second.

“Obviously, if need be, I'll go out there and do my best like I did (Sunday), but that's about all I can say.”

The 35-year-old Morstead played 12 seasons in New Orleans and has a 46.5-yard career average, but was cut by the Saints in March. He'll fill in for the Jets in Mann's absence.

Ammendola made it to the NFL on the power of his right leg and, particularly, his ability to kick field goals and extra points.

Ammendola ended up at Oklahoma State, where he kicked for four years and had 359 career points while ranking in the school's top five in points, field goals made and attempted, field goal percentage, and extra points made and attempted. He was also a member of the Big 12's all-academic team all four seasons.

He went undrafted in 2020, but his strong leg intrigued several teams. Ammendola worked out in California and focused on placekicking, but also did some work on punting on off days since many teams look at versatility as an asset — making what he did Sunday seem not so foreign.

“I wouldn't hit a lot of reps and whatnot, but it was always good just to go out there, get a few reps and feel confident in yourself,” he said. “And then you just go through the motions and obviously hope for the best.”

Carolina signed Ammendola as an undrafted free agent in March to give Joey Slye some camp competition, but he was cut in May. Two months later, the Jets signed him to compete with Chris Naggar — and he won the job.

Ammendola has the punting part down. Now, he just needs to get a chance to do his real job: You know, kick some field goals and extra points.

“I spoke to both my kicking coaches afterwards and they were watching me, obviously supporting me,” Ammendola said. “It's the NFL and you never know what to expect and you've always got to be ready for the unexpected.”

NOTES: In addition to Mann, the Jets placed LT Mekhi Becton (knee), LB Blake Cashman (hamstring) and S Lamarcus Joyner (triceps) on IR. ... New York signed free-agent LB B.J. Goodson, who played last season with Cleveland. He was a fourth-round draft pick of the Giants in 2016 and has also played with Green Bay. ... S Jarrod Wilson and OL Isaiah Williams were signed from the practice squad. ... LB Noah Dawkins and OL Elijah Nkansah were signed to the practice squad.