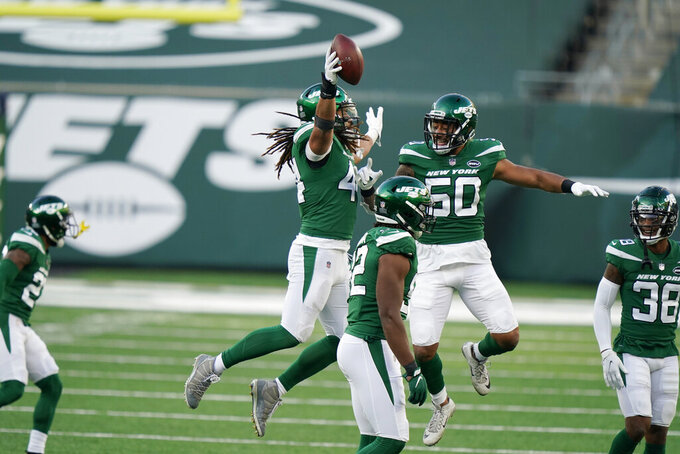 The car they were sitting in on Oct. 13, 2017, was rear-ended at a stoplight in Foxborough, Massachusetts, and instantly crumpled into a pile of twisted metal and broken glass.

Langi, then a New England Patriots linebacker, and his wife Cassidy were rescued from the wreckage and transported to separate hospitals, each with serious injuries. The physical pain was one thing. The mental anguish of fearing for his wife was unbearable.

“That, personally, just ruined me because you just don’t know any information,” recalled Langi, now with the New York Jets. “But once I knew we were OK, it changed me as a person to just don’t take anything for granted. The things that are important — your family, your friends, your relationships — you’ve got to keep those ties.

“Call your parents, call your brothers and sisters, and tell them you love them.”

That's what motivates the 28-year-old Langi, on and off the football field. He's a loving father, with Cassidy giving birth to a son in 2019 and a daughter in October. It's also what has made him possibly the most energetic and passionate player — with his braids flying behind his helmet — on any field he's on.

“Harvey, he knows the opportunity is there and he’s going to make the most of it,” coach Adam Gase said. “How hard he plays is impressive to watch."

Now in his third season with the Jets, Langi is thriving while starting at inside linebacker. Previously an outside linebacker, he has 29 tackles since moving into the lineup in Week 9 following the trade of Avery Williamson to Pittsburgh. His 9.7 tackles per game rank him fourth among all NFL players who have played at least three games during that span, according to Radar360.

“I feel like I can improve,” Langi said. “I'm my biggest critic. I feel good being out there, of course. But I just want to keep trying to figure out ways I can improve and keep helping this defense.”

Langi seems to be in on almost every play, motoring from sideline to sideline — even when he makes a mistake. Against New England in Week 9, Langi missed a chance at sacking Cam Newton twice on the same play, but zipped downfield to tackle Jakobi Meyers.

That hustle has made Langi a bit of a favorite of fans who have had little to root for during an 0-11 season.

“There’s a lot of people that would want to trade seats or be in the seats that we're in,” Langi said. "My job is to come here and do everything I can on the defensive side and on special teams to make the Jets a better team and to get wins. ... So, you know, if that’s the way others perceive me, as that type of energetic guy, I’m not going to bash it or take it down. That’s awesome.”

Langi was signed by the Patriots as an undrafted free agent out of BYU in 2017. He played in one game before the car accident that left him with injuries to his knees, ankles, back, neck and a concussion. His wife had head trauma, broke several ribs and had multiple fractures to her pelvis.

The driver, Kevin Conroy, was charged with drug possession, negligent operation and possession of an open alcohol container.

It took the Langis three days before they saw each other again, with Harvey — on crutches — visiting Cassidy in her hospital room. Harvey's thoughts eventually turned to someday playing again.

“Once I knew that I was OK and I was alive,” the linebacker recalled, “and I could move my body and move my feet, I’m like, you know what? Whatever anybody says, I’m going to overcome this and I’m going to work hard to get back on that field.”

That was despite the doctors telling him he should perhaps reconsider. The doubts sometimes crept into his mind, thinking maybe the way back would be as a coach rather than a player. But, Langi would quickly shove those thoughts aside and focus on his comeback.

After nearly a year of tough rehabilitation, Langi returned to play football.

He was among the Patriots' final cuts in 2018 and then signed by the Jets to their practice squad, where he spent that entire season. Last year, Langi played in every game, including three starts, and proved to be a valuable contributor.

He's making an even bigger impact this season — guided by an overwhelming sense of gratitude.

“Being back on the field, before the game or before practice or anything like that, I take a deep breath,” Langi said. “I just go back to, man, I can’t believe I’m playing this game again and I get that perspective of, man, this is awesome. And I’m super blessed and grateful that I get to be on this field again.

“It just helps me professionally that I can’t just sit back and let this opportunity slip away.”