Jets look for better balance on offense after Week 1 dud 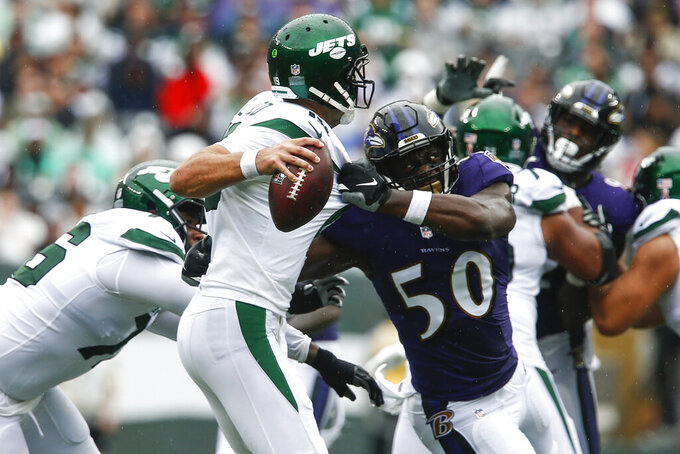 FLORHAM PARK, N.J. (AP) — Mike LaFleur glanced at the final stats from the New York Jets' season opener and one number really made him uneasy.

Joe Flacco threw the ball a whopping 59 times in the 24-9 loss to Baltimore last Sunday.

Not exactly the way the offensive coordinator drew it up.

“It sucked for me looking at that at the end of game,” LaFleur said Thursday. "When you get that stats sheet, which you look at for about 10 seconds, and then you put it down because you know how it kind of unfolded.

“When you look at it from before it got to 24-3, I want to say we were 16 runs to 23 passes or something like that; 22 passes, not counting third down, which is semi-balanced. But still not balanced enough.”

The Jets finished with 17 rushing plays for 83 yards. Playing from behind certainly played a role in the focus on all the passing, especially late in the game.

“In the fourth quarter, you’ve got to fight the urge to try to get it all back in one,” LaFleur said.

Better balance was the theme this week. But so was cutting down on the mistakes that helped put the Jets in such dire straits.

Flacco threw an interception when intended receiver Lawrence Cager slipped on the wet MetLife Stadium turf in the middle of his route.

Rookie running back Breece Hall fumbled after a 7-yard catch that would’ve been a first down, but the Ravens recovered. Flacco found a wide-open Michael Carter on fourth-and-goal late in the game, but Carter dropped the pass in the end zone. Elijah Moore appeared to have a touchdown with just over a minute left, but was called for offensive pass interference.

Oh, and New York went just 2 of 14 in third-down situations, getting its first conversion with 9 minutes left in the game after failing to make its first eight chances.

“When you go 0 for 8 on third down basically throughout the first three quarters when it was still a game, it’s hard to win football games,” LaFleur said. "We had two times inside the 27-yard line there in the first half and came away with only three points. And both times in the 20-yard line, we had a third-and-4 and third-and-5 — those are both on-schedule third-down opportunities that we have to make.

“We had opportunities to make those plays and we didn’t and we've got to get that fixed. That starts with me in terms of getting them the right play call where it makes their life even easier.”

LaFleur has taken lots of criticism this week with fans and media frustrated about the ineptitude of the Jets' offense in the opener.

Sure, it was a 37-year-old Flacco filling in at quarterback for the injured Zach Wilson. And the offensive line had to do some late shuffling because of injuries. But more was expected with the additions of young playmakers to make the offense much more dynamic.

The Jets' lone touchdown came with 1 minute left in the game on Tyler Conklin's 3-yard catch.

“Not good,” LaFleur said of his assessment. "Any time you only score nine points — obviously six of it being in the last minute — it’s just not good enough. I mean, this is a results-based business. Results on offense usually means points. The more points you score, the better chance you have of winning football games, especially the way our defense played.

“They absolutely performed at such a high level, it stinks that we didn’t get it done on our side.”

LaFleur and the offense will get a chance to do just that Sunday at Cleveland. But it'll come against a defense that likes to get after the quarterback.

NOTES: TE C.J. Uzomah was an addition to the injury report with a hamstring injury that limited him at practice. ... Also limited were QB Zach Wilson (knee), LT George Fant (knee), DE John Franklin-Myers (toe), S Jordan Whitehead (ankle) and P Braden Mann (back). Fant, Franklin-Myers and Whitehead were upgrades after not practicing Wednesday. ... WR Braxton Berrios (heel) was a full participant after being limited Wednesday.