Jets look to continue surprising start as they visit Packers 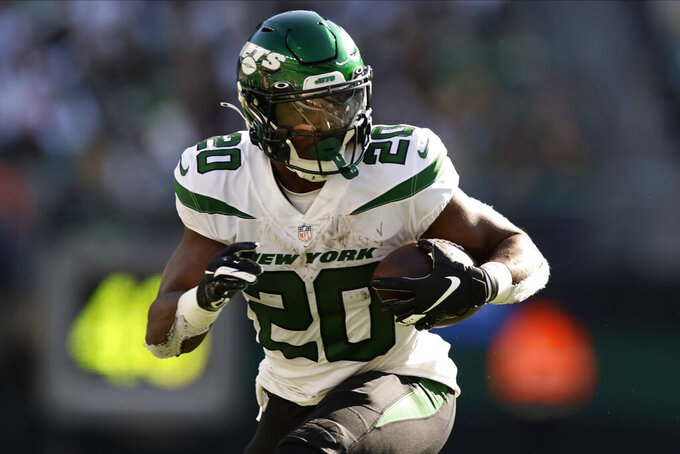 OPENING LINE: Packers by 7, according to FanDuel SportsBook.

TURNOVER DIFFERENTIAL: Jets even; Packers minus-3

JETS PLAYER TO WATCH: RB Breece Hall had 197 all-purpose yards — 100 on two receptions and 97 on 18 rushes — last week against Miami. It was the most total yards by a Jets rookie since 1970. The second-round pick from Iowa State has quickly established himself as a key playmaker in the offense, complementing Michael Carter in the backfield to give the Jets a solid tandem.

PACKERS PLAYER TO WATCH: RB Aaron Jones is averaging 6.4 yards per carry to rank third in the league and first among running backs. His 390 yards rushing rank him seventh in the NFL.

KEY MATCHUP: Packers QB Aaron Rodgers vs. Jets secondary: Rodgers is as good as anyone at avoiding interceptions. He hasn’t thrown double-digit interceptions in a single season since 2010 and has been picked off just 96 times in 7,286 regular-season pass attempts. The Jets have intercepted seven passes this season, one off the NFL lead. Lamarcus Joyner leads the way with two interceptions.

KEY INJURIES: Jets LB Quincy Williams returned to practice on a limited basis after being sidelined the past two weeks with a high ankle sprain and was removed from the injury list. ... Rookie DE Jermaine Johnson (ankle) was ruled out after not practicing all week. ... Rodgers didn’t practice Wednesday because of an injured right thumb, but fully participated Thursday and Friday, and was removed from the injury report. ... Packers WR Christian Watson left the Giants game with a hamstring injury and won't play Sunday. ... Packers WR Sammy Watkins will miss a fourth straight game with a hamstring injury.

SERIES NOTES: The Packers trail the series 8-5, but have won each of the past three meetings. Rodgers threw for 442 yards and two touchdowns and ran for two more scores in the 44-38 overtime victory that gave the Packers their only road triumph of the 2018 season. ... The Packers also beat the Jets 9-0 at East Rutherford in 2010 and 31-24 in Green Bay in 2014.

STATS AND STUFF: The Jets are looking for their first 4-2 start since 2015, when they went 10-6 under Todd Bowles. ... At 3-2, they are over .500 for the first time since winning the season opener against Detroit in 2018. ... New York scored 21 unanswered points in the fourth quarter last week in its win over Miami. The Jets have been strong in the final period this season, outscoring opponents 58-20. The 58 points lead the NFL and the 38-point margin in the fourth quarter is second only to Arizona's 40.. ... Hall joined New Orleans’ Alvin Kamara, Seattle’s Joey Galloway and Dallas’ Herschel Walker as the only NFL rookies since 1970 to have at least 100 yards receiving yards, 80 yards rushing yards and a TD run in the same game. ... According to Sportradar, OL Alijah Vera-Tucker is one of three players to start at four or more offensive line positions in his first 21 NFL games among players to debut since 2006. Vera-Tucker started at right tackle a week after starting at left tackle — after previously starting this season at right guard and playing left guard as a rookie. The only others to do it are Brady Christensen (Panthers) and Michael Ola (Bears/Chargers). ... The Jets have 41 explosive plays — passes of 16-plus yards and rushes of 12-plus yards — to tie them for fifth in the NFL. It’s the most for the Jets through five games since 2000. ... QB Zach Wilson’s 5-yard TD run last week made him the first player this season to score at least one TD via pass, run and catch. He’s the only Jets QB to accomplish the feat and first Jets player to do so in the same season since RB Curtis Martin in 2000. ... The Jets were credited with 16 quarterback hits last Sunday, with Carl Lawson getting seven, the most in a game by a Jets player since 1970. ... The Packers are 18-1 in Rodgers’ past 19 starts against AFC teams at Lambeau Field. ... Rodgers has thrown at least two TD passes in each of his past four games. ... Packers OLB Rashan Gary has five sacks this season. ... The Packers have never lost consecutive regular-season games within the same season since Matt LaFleur took over as coach in 2019. ... The Jets have earned a first down on 15 of Corey Davis’ 17 catches. That’s the highest first-down percentage for any receiver. Green Bay’s Allen Lazard ranks second in that category, as 14 of his 16 receptions have produced first downs. ... LaFleur is the older brother of Jets offensive coordinator Mike LaFleur. Matt LaFleur and Jets coach Robert Saleh worked together as assistants at Central Michigan (2004) and with the Houston Texans (2008-09).

FANTASY TIP: Hall’s recent emergence suggests he may be worth starting this week against a Green Bay defense that has struggled against the run.