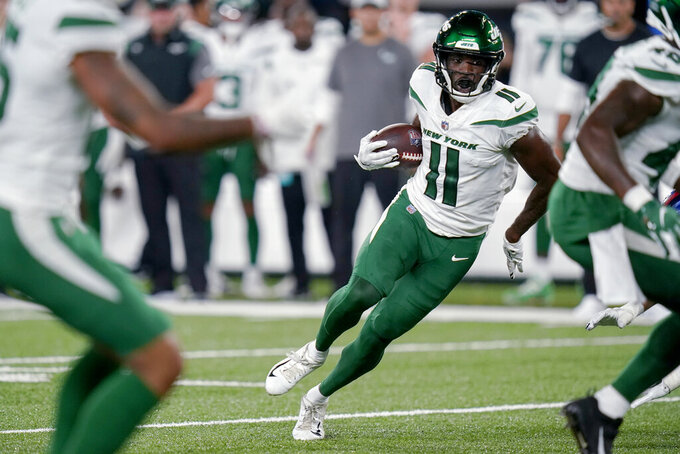 FILE - In this Aug. 14, 2021, file photo, New York Jets wide receiver Denzel Mims (11) runs the ball in the second half of the team's NFL preseason football game against the New York Giants in East Rutherford, N.J. Mims is used to being the guy making plays, not the one wondering about playing time. Mims has played in two regular-season games — the opener, in which he had a 40-yard catch at Carolina; and last Sunday against Tennessee, when he played 10 snaps on offense with no targets. (AP Photo/Frank Franklin II, File)

FLORHAM PARK, N.J. (AP) — Denzel Mims is used to being the guy making plays, not the one wondering about playing time.

But that's where the New York Jets wide receiver has mostly found himself this season, a second-round pick who has seemingly become an afterthought.

“It's been different,” Mims acknowledged Thursday in his first meeting with reporters since the preseason. “Being on the sideline instead of on the field, that’s different for me. But, you know, my goal is, since I'm on the sideline, just be supportive. You know, be there for my teammates, make sure I cheer them on and try to help them any way I can, no matter what it is.”

Being a cheerleader, though, wasn't exactly in the game plan for Mims.

He has played in two games — the opener, in which he had a 40-yard catch at Carolina; and last Sunday against Tennessee, when he played 10 snaps on offense with no targets. He was a healthy inactive the other two games, and will likely be again Sunday when New York plays Atlanta in London.

“Yeah, of course it's frustrating,” Mims said. “I'm a competitive player. Of course, every player wants to start and be a starter. But everything doesn't go your way, you know? I've got to control what I can control and come in each and every day and put good things on tape and hold my head high. And be positive.”

But Mims' situation has confused many fans and media over the last several weeks.

He was the 59th overall pick by the Jets last year after a standout career at Baylor. Mims dealt with hamstring issues in his first NFL training camp a year ago before putting together a promising rookie campaign. He caught 23 passes for 357 yards in nine games, including eight starters.

But a change in coaching staffs and a new offensive system became a hurdle. So did a wicked bout of food poisoning after eating some bad salmon in the spring, causing him to lose 20 pounds — and hampering his development.

“I got sick in OTAs and it put me back a big step in a big way,” Mims said. "This is a completely different playbook, so I was behind compared to everyone else. But I'm coming along, I'm getting there. I think I'm there. I'm ready.

Mims has found playing time scarce, even with injuries to Moore, Jamison Crowder and Jeff Smith.

Both coach Robert Saleh and offensive coordinator Mike LaFleur have explained several times that it's a numbers game. They've said Corey Davis, Crowder, Moore and Keelan Cole are the top four wide receivers. That leaves Mims, Smith and Braxton Berrios. Well, Berrios is the Jets' primary punt/kickoff returner and Smith is regarded as one of the team's top gunners on punt coverage.

Meanwhile, Mims doesn't have a role on special teams — so he has been the odd man out.

“We've got a really good room, and that’s a credit to Joe (Douglas) and his staff and what they’ve been able to build,” Saleh said. “So, this isn’t an indictment on Denzel.”

Saleh and LaFleur have said Mims has looked good in practices the last few weeks, and the wide receiver said the staff has made it clear to him what he needs to work on — and what they're looking for from him.

As for whether he plays this weekend, that's what he's planning. Just as he does every week.

“I can’t control their decisions,” Mims said. “The one thing I can control is my effort and my attitude, so I’ve got to do that. I’ve got to make sure I have a positive attitude and my effort’s got to be great.”

One thing that hasn't wavered through the situation has been Mims' confidence.

“You can't play this game if you don't have any confidence,” Mims said. “That's one thing I learned growing up. I actually saw that on a video Stefon Diggs posted. You never can lack confidence. Never do that. Because you've defeated yourself at that point.”