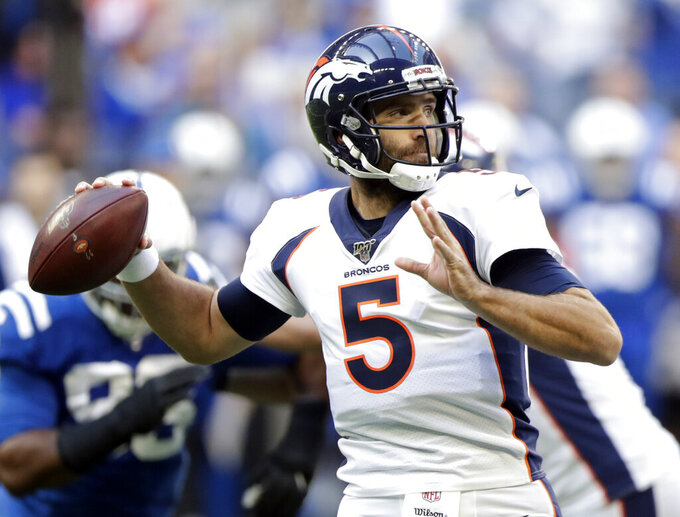 FILE - In this Oct. 27, 2019, file photo, Denver Broncos quarterback Joe Flacco (5) throws during the first half of an NFL football game against the Indianapolis Colts in Indianapolis. The New York Jets and Flacco have agreed to terms on a one-year deal, the 2013 Super Bowl MVP's agency announced on Twitter. (AP Photo/Michael Conroy, File)

The move to bring in Flacco gives third-year starter Sam Darnold a veteran backup, but one who is also coming off a herniated disk that cut short his only season in Denver and required surgery to repair.

JL Sports, headed by agent Joe Linta, announced the agreement Friday. Financial terms were not immediately disclosed, but ESPN reported the deal is worth $1.5 million and could reach $4.5 million with incentives.

The 35-year-old Flacco spent his first 11 NFL seasons in Baltimore, where current Jets general manager Joe Douglas was a scout in 2008 — when the Ravens drafted the quarterback 18th overall out of Delaware. Flacco helped lead Baltimore to a Super Bowl victory to cap the 2012 season, beating Colin Kaepernick and the San Francisco 49ers 34-31.

Flacco was rewarded by the Ravens by becoming the highest-paid quarterback in NFL history at the time with a six-year contract worth $120.6 million.

Last winter, Flacco's time in Baltimore came to an end — officially clearing the way for Lamar Jackson — when the Ravens traded him to Denver for a fourth-round draft pick. Flacco started the first eight games for the Broncos, but injured his neck against Indianapolis in Week 8 and missed the rest of the season.

He was waived by Denver in March with a failed physical designation, but is expected to be fully recovered in time for training camp in the summer — if it goes on as scheduled with the coronavirus pandemic making uncertain any plans for the season.

With Flacco in the mix, the Jets suddenly have a crowded quarterbacks room that includes Darnold, David Fales, Mike White and James Morgan, who was drafted in the fourth round as a developmental arm out of FIU.

But the need for a veteran backup for Darnold was magnified last season when the quarterback missed three games with mononucleosis. Trevor Siemian took over, but lasted just over a quarter, injuring an ankle and missing the rest of the season. Third-stringer Luke Falk started the next two games, but was ineffective.

Flacco has thrown for 40,067 yards with 218 touchdowns and 141 interceptions in 11 seasons. He struggled during Denver's 2-6 first half of the season, throwing for only 1,822 yards with six TDs and five interceptions, and was sacked 26 times. Flacco said he initially had neck issues a few weeks before the game against the Colts.

After the season, Flacco was optimistic he would be medically cleared and be able to continue his career. He also said he would be open to a backup job, if that scenario played out.

“I’m probably a little bit more worried about other things at this point,” Flacco said on Dec. 30. “If that’s what it has to be, then, I want to play football ... whether it’s here or wherever, if that’s what it’s going to take for me to get back in and start playing again, then yeah, I’ll go that route.”

Joining the Jets marks a bit of a homecoming for Flacco, who's from Audubon, New Jersey, which is about 90 minutes south of the team's training facility in Florham Park.