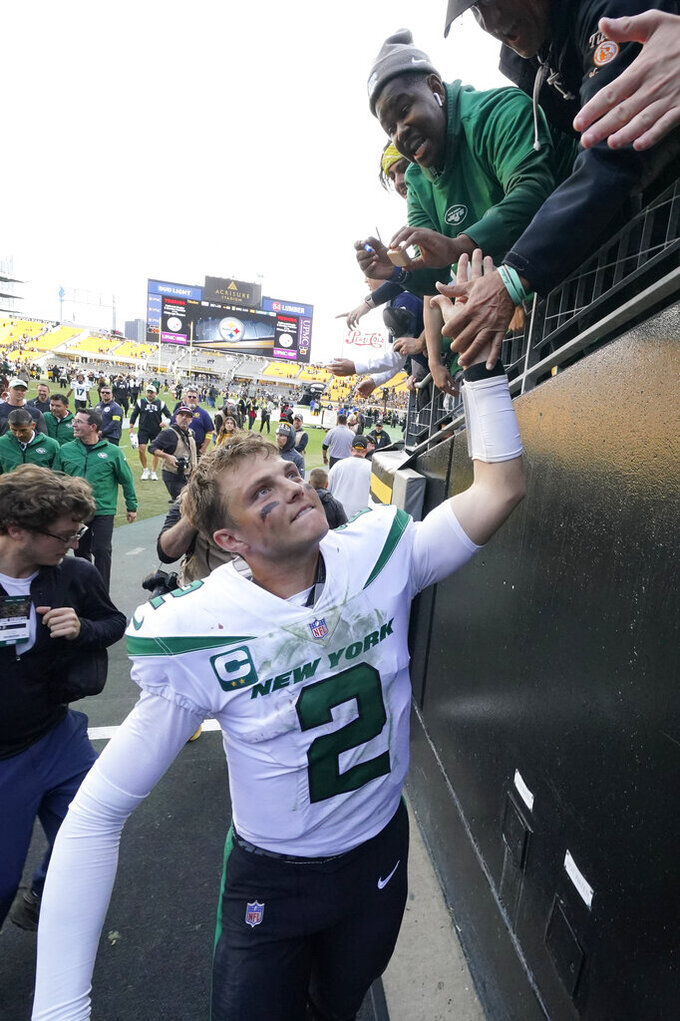 New York Jets quarterback Zach Wilson (2) greets fans as he heads to the locker room after during an NFL football game against the Pittsburgh Steelers, Sunday, Oct. 2, 2022, in Pittsburgh. (AP Photo/Gene J. Puskar)

FLORHAM PARK, N.J. (AP) — Zach Wilson's season debut was far from perfect. When it counted most, though, he was as impressive as the New York Jets needed him to be.

“Him and the rest of the group, just resilience,” offensive coordinator Mike LaFleur said Thursday. “To put together those two drives in the fourth quarter says a lot about those guys, says a lot about him as a leader, how much he’s continuing to grow and grow and mature.”

The second-year quarterback completed eight of his first 24 passes for 124 yards through three quarters. But Wilson was 10 of 12 for 128 yards while leading two touchdown drives in the final 15 minutes, capped by Breece Hall’s go-ahead 2-yard run with 16 seconds left.

And that came after Wilson coolly told his teammates they were going to pull out the victory — and delivered.

“I mean, part of it is our mentality as an offense and what we are trying to do, and this growth mindset,” Wilson said. “You step in the huddle, you look at the situation, you kind of feel the momentum, the vibes, and you look at everybody in the eye like, ‘Hey, we’re going to go down and score right here.’

“I think that’s a cool thing, a special thing. We learned a lot from that last drive, so it’s going to be good for us moving forward.”

The Jets (2-2) are looking to snap a 12-game losing streak against AFC East opponents when they host the Miami Dolphins (3-1) on Sunday.

The last time New York beat a division opponent was Dec. 29, 2019, when it defeated Buffalo to end the season. Wilson was still at BYU — 16 months from the day the Jets would take him with the No. 2 overall pick in the NFL draft.

He has been viewed by many in the franchise and in the fanbase as a savior, a player who could help the team break its 11-year postseason drought and have sustainable success. Those hopes were tempered a bit by injuries and up-and-down play, but Wilson's performance late in last Sunday's game has rekindled them.

“Through experience, it’s going to continue to get better and better,” LaFleur said. “For him to lead that group and those guys to go out and make the plays when we needed them to, I wish we wouldn’t have been put in that position and I have to make sure I do a better job of making sure that doesn’t happen. But those guys took over in the fourth quarter and made a lot of plays.”

Wilson scrambled out of trouble several times, showing no ill effects from the knee injury that had sidelined him since the preseason opener on Aug. 12. He made some great reads, especially in the fourth quarter, to keep the rally going.

“It’s short-term memory,” Wilson said. “It’s how can I approach it one play at a time? And then we look at it one game at a time. You focus on that scenario at a time. You don’t worry about the stats, plays that came on before that. It’s how can I do the best play I can on this and move on from there?”

Wilson showed up on the injury report Wednesday with what he called “a little ankle” ailment that kept him limited, but he was a full participant at practice Thursday.

Physically — and mentally, as the Jets look for their first 3-2 start since 2017.

“I think it’s going to be a fun challenge for us,” Wilson said. “I’m excited to go against these guys and I think we have a good plan.”

NOTES: LB Marcell Harris (neck) was a full participant at practice after being limited Wednesday. ... Hall (knee) was limited for the second straight day. ... LT Duane Brown (shoulder) continues to practice and has “looked good,” according to offensive line coach John Benton. Brown, whose snap count has been limited, could be a game-time decision. ... Defensive line coach Aaron Whitecotton said the heated sideline disagreement he and DT Quinnen Williams had two weeks ago was just “a slight miscommunication.” During the TV broadcast, CBS showed the two shouting at each other during New York's loss to Cincinnati and getting into each other's faces before being separated. “It’s funny because the cameras caught us face-to-face, but they didn’t catch us hugging like 3 seconds later," Whitecotton said. “Heat of the battle, two passionate guys — we just both want to win.”