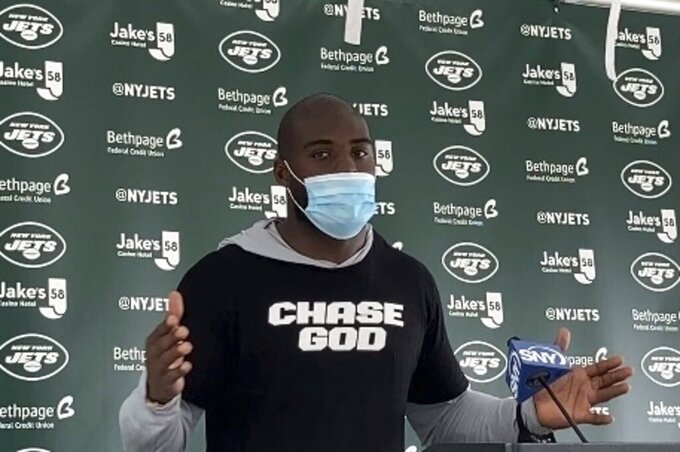 FLORHAM PARK, N.J. (AP) — Jarrad Davis was in a tough spot on the field — and a dark place in his head.

The once-promising linebacker was no longer a starter for the Detroit Lions, struggling to find a role and desperately trying to fend off the negative thoughts that were chipping away at his confidence and love for football.

“I contemplated walking away,” Davis acknowledged Wednesday after his first practice with the New York Jets. “I really did, man. But at the end of the day, like, I wouldn’t have felt right doing something else, you know?”

That's because the 26-year-old Davis knows he still has plenty of plays left in him. A first-round pick of the Lions in 2017, Davis' first two NFL seasons were promising as he registered at least 90 tackles in each and had a career-high six sacks in his second year.

But under coach Matt Patricia, Davis' snaps began to dwindle. He struggled at times in coverage and his production fell off.

“The battle's up here,” Davis said, pointing to his head. “And I was losing that battle every single day.”

Davis started just four games last season and hardly resembled the playmaking stud who was the 21st overall pick out of Florida.

“One thing that I was doing, and this is on me, I was making the game everything,” Davis said. “I was making myself the game. And when I was doing that, it just didn’t feel right. This is such a competitive sport at this level and you have to put your all into it. But there has to be balance. I had a personal life, but it wasn’t as important. I didn’t really care. If my personal life got in the way of football, it couldn’t exist.

"Living like that, I burned myself out. I had to do some things, take care of myself personally, mentally, emotionally — get back right and revitalize.”

He turned to help from Dr. Rick Perea, a Denver-based expert in performance psychology who Davis met during the draft process. Perea started by having him “change the lens” through which he viewed all aspects of his life.

"And it’s just something I do now. It’s not who I am anymore.”

Davis acknowledged that realization felt weird at first because he insists he never truly lost his love of football, a game he has been playing since he was 6 as a kid on the pickup fields in Kingsland, Georgia.

“Doing that, it fell backwards, everything that I was about,” he said. “But at the same time, it’s so freeing to be out here now. Like, if I mess up in practice, I mess up in practice. You know what I’m saying? I can bounce back from that and come back and make a better play.”

Mental health has increasingly become a focus in sports, with U.S. gymnast Simone Biles the most recent example after the Olympic champion removed herself from the team final at the Tokyo Games earlier this week following one rotation because she felt she wasn’t mentally ready.

Davis could certainly relate to the thoughts of trying to balance the pressure to perform with every move being dissected — mostly by people who don't know them or understand what they deal with on a daily basis.

“It’s like if she takes one misstep, everything is wrong,” he said. “Like, it’s either good or bad and it’s like there’s no in between for her. And I feel like it’s either do or die. And it sucks when you get in those situations as a person, you know what I mean? Not as a competitor, but as a person. When you feel like you make the wrong move, it’s like ‘I’m terrible’ and when you feel like that every day, you almost get antsy to take a misstep. So now you can’t even walk as yourself confidently anymore.”

That's something Davis believes he can do again with the Jets, with whom he signed a one-year, $5.5 million deal in March.

Davis is looking forward to playing in coach Robert Saleh's system, and the feeling is mutual. Defensive coordinator Jeff Ulbrich scouted Davis while he was coaching in Atlanta and hoped to someday have him on his team.

“Absolutely loved the makeup of the guy, and loved the player,” Ulbrich said. “Always was super hungry to get him within this system, put him on repeat, let him just master some techniques. Let his speed and his run and hit just go. And, that’s all starting to show up.”

And after all the doubts and soul searching, Davis is comfortable and feeling good about himself again. On and off the field.

“I’m excited every day, man,” Davis said. “I wake up every day and just thank God for being able to come back out here.”