Jets' struggling Herndon looks to catch on after rough start 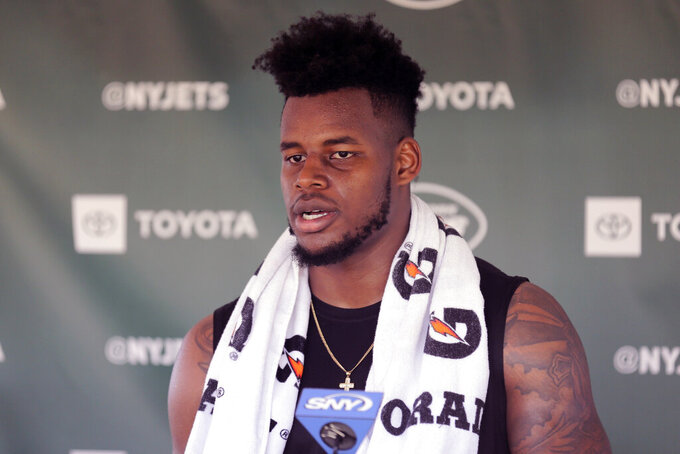 NEW YORK (AP) — This was supposed to be the year Chris Herndon busted out in a big way on the field.

The New York Jets tight end expected it. So did coach Adam Gase. And quarterback Sam Darnold. Plenty of fantasy football players did, too, making him a popular pick with lots of potential for catches and touchdowns.

Instead, Herndon's first five games have been filled with drops, diminished playing time and doubts.

“You think you're locked in and whatnot, and you watch film and see the simple mistakes that you made,” Herndon said. “A lot of it is just self-inflicted. So for me, personally, I need to lock in some more on details. You know, every detail and every assignment, just go out there and play free.”

That has been easier said than done for Herndon, who's in his third NFL season.

“We've had a lot of discussions with him about playing it one play at a time, and whatever happens on the previous play — whether it's good or bad — just move on to the next one,” Gase said. "We just keep trying to get him in the mode of playing as fast as he possibly can play. Not overthinking, not worrying about what the end result's going to be.

"Just play fast, run fast and do what you've done and what we've seen him do in the past."

It's still early, of course, and Herndon ranks third on the Jets with 13 catches for 98 yards — but hasn't reached the end zone.

Gase raved about him in training camp as being “special” and with New York dealing with several injuries to their wide receivers, Herndon was being counted on to help fill the void. But he has been plagued by dropped passes, including when he was wide open on a play-action pass from Joe Flacco against Arizona last Sunday that could have been a touchdown.

“Look the ball in first, tuck it and get north after that,” Herndon said of what he should have done. “It's just another instance of where I need to focus in and try not to make the big play before I make the play. First, I've got to catch the ball.

"That'll take care of itself.”

With Herndon struggling, he hasn't been on the field as much lately. Against the Cardinals, Ryan Griffin played 61% of the offensive snaps while Herndon was on the field for only 42%.

“We were trying to balance that out a little bit because Ryan does do a good job,” Gase said. "At the same time, I do think Chris has a unique skill set. He does some things I haven’t seen most tight ends be able to do as well as he does. Between his run blocking and pass protecting, the fact that he’s a threat in the passing game, we haven’t been able to find that consistency to get him going.

“Whether it’s a confidence thing, the wrong play vs. the wrong coverage, I just feel like he needs that one or two plays to really have positive things to happen and keep building off of that.”

It has been a strange path for Herndon, who was a fourth-round pick out of Miami in 2018 and built a strong rapport with Darnold as a rookie. He caught 39 passes for 502 yards and four touchdowns, looking like someone the Jets would be able to count on for years to come.

But last season began with a four-game suspension by the NFL for violating the league's substance abuse policy. While preparing to return, he injured a hamstring and missed four more games. In his first game back, he caught a 7-yard pass but broke a rib and was lost for the rest of the season.

Herndon came to training camp in terrific shape and routinely made plays throughout the summer. It simply hasn't translated, though, since the regular season began.

“I feel like this is really one of those things where if he just gets that one play where he gets going,” Gase said, “that could be a good snowball effect for him.”

While the questions about the 24-year-old tight end's potential persist, Herndon's teammates still believe he can be a playmaker.

“I think we need to keep feeding him the ball in practice situations so that he feels good about what he’s going to do and feels confident going into a game,” Flacco said. “I don’t think anything necessarily has to be said. It’s more just keep going to him, showing confidence in him. ... I have all the trust in the world that he can get the job done and that’s just what you've got to keep doing.”