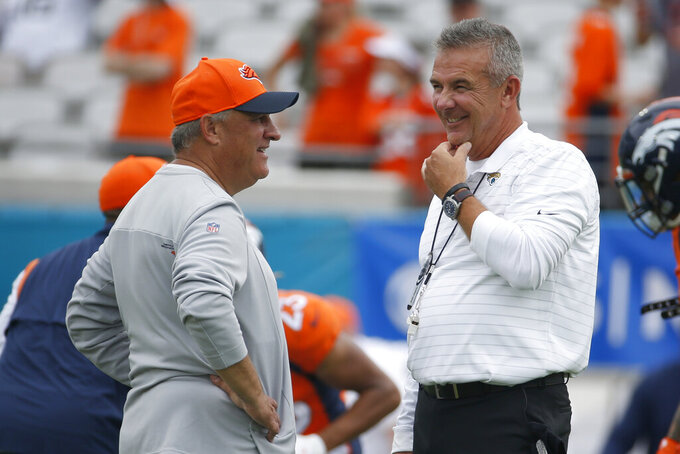 “I guess the confusion, especially with Vic's defense,” the Broncos' star safety said of the dizzying schemes cooked up by Denver coach Vic Fangio.

They're quirky and complex — and equally difficult for his own players to master as they are for opposing QBs to decipher.

Zach Wilson of the Jets (0-2) gets next crack at beating the Broncos' hybrid coverages that combine zone and man concepts disguised by defenders that chill until the instant the ball is snapped.

“A lot of the time, we’re giving you the look that you’re seeing, and a lot of time, we’re not. I think that’s part of the game within the game,” said Simmons, who embraces his role of giving the quarterback "false information so he doesn't know pre-snap where he's going with the football.”

“All that sounds great, but you have to have the guys to be able to do it,” Simmons added.

At last, the Broncos do.

Despite injuries to three defensive starters, they have a terrific pass rush led by Von Miller; a stout D-line anchored by Shelby Harris; an emerging linebacking corps featuring Alexander Johnson; and a secondary second to none in the league.

The Broncos (2-0) face the second overall pick in the NFL draft this weekend, one week after throttling the No. 1 overall pick, Jacksonville's Trevor Lawrence, whom they intercepted twice and held to 118 yards on 14-of-33 passing.

Wilson was intercepted four times in a loss to New England and his paltry passer rating of 37.2 was essentially identical to Lawrence's 37.0.

That includes 7-2 since his great 2018 Bears defense whose blueprints Belichick used to thump the Rams in the Super Bowl that year.

“Yeah, a couple of the best right there," Wilson said.

“Vic, he’s another one of those guys who just is a savant with defense,” concurred Jets first-year head coach Robert Saleh. “And he’s always been at the front in terms of scheme and all that stuff, so a ton of respect for him.

“And it’s going to be exciting to see Zach," Saleh said, adding that while it's tough for a rookie to begin his career against some of the best defenses in the league, “he's going to learn a lot from it.”

Other subplots Sunday when Empower Field at Mile High hosts its first capacity crowd since Dec. 29, 2019:

The first month of the season has been rough for the Jets, who have lost 11 consecutive September games. That's the longest active streak in the NFL and it's tied for the third-longest such skid in league history, behind only the 2007-10 Rams (13 in a row) and 1994-97 Saints (12).

“When he came here as a rookie he was on fire," Miller said of Strnad, who missed his rookie season after breaking a wrist in training camp. “I'm excited to see Justin play.”

Reed will get a 23rd start since joining the Broncos as an undrafted free agent in 2019 to back up Chubb and Miller, who predicted Reed's “crazy resume” will lead to a big payday soon.

Teddy Bridgewater is just the fourth quarterback in NFL history to open a season with two touchdown passes, no interceptions and a 75% completion rate in each of his first two games of a season.

After going 4-11 in one forgettable season with the Panthers last year, Bridgewater led Denver — his fifth stop in his eight-year NFL career — to consecutive road wins to start a season for the first time since 2003.

“He is, to me, one of the more underrated starting quarterbacks in this league,” Saleh said. "... He really is a fantastic quarterback, and there’s a reason for Denver being 2-0 and racking up over 400 yards a game in offense. It’s not a fluke.”

Jets running back Michael Carter and Broncos counterpart Javonte Williams spent plenty of time together in the backfield at North Carolina. Now they’re opponents, facing each other for the first time Sunday.

“I love him so much,” said Carter, who was drafted in the fourth round in April, two rounds after Williams went to Denver.

They’re both off to solid starts. Carter has rushed for 65 yards on 15 carries, adding a dynamic presence to the Jets’ offense. Williams has run for 109 yards on 27 carries for Denver, where Bridgewater compares him to a young Alvin Kamara.

“It’s a weird experience because I’ve always been on his team and I know what kind of player he is,” Carter said. “He’s my dog, but this week, he’s my opponent.”