Jones speaks up, tries to get Falcons on track 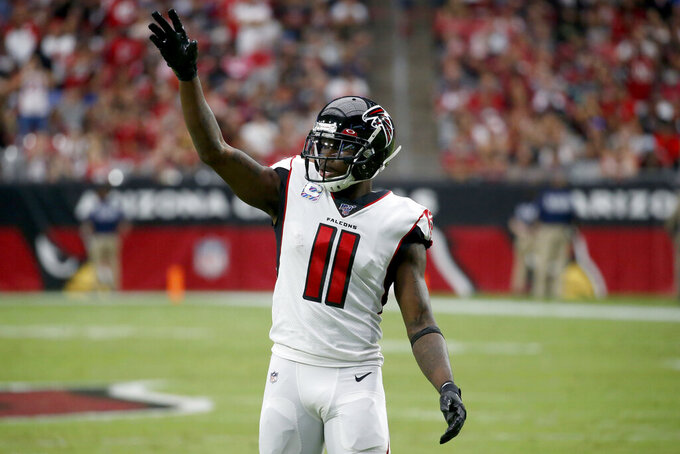 The six-time Pro Bowl receiver finally had enough last week, however, after the Falcons played their worst game of the season and lost their fifth straight.

While coach Dan Quinn was speaking to the team, Jones stepped up and asked if he could say a few words. He was emotional in his defense of Quinn and the told the room that the players were the ones most responsible for Atlanta's 1-6 record.

Jones stuck to his old-school principles on Thursday, carefully not singling out teammates for poor effort and insisting that everyone is playing hard.

He left some room for interpretation, too.

"I believe in everybody that's here, the effort they're giving, but they only know how much effort they're giving," Jones said. "It can look good, but if you've got more, it's up to you to give more and do your part. But from what I see, everybody's been doing a great job as far as coming out here and fighting every week."

Jones knows how much weight his words carry. He is the NFL's highest-paid receiver and a former All-Pro who is the fastest in history to 11,000 career yards receiving.

"Just being here for nine years, different guys in and out, we have the team to be good, to be great," he said. "You know, the ball hasn't been bouncing our way lately and it's just one of those things for guys to know we're all in here together. ... When the times get tough you can play the blame game and things like that.

"None of this has happened, but I just didn't want it to get to that point where guys are down on themselves, not trusting their routines and things like that. We just talked."

The Falcons are in turmoil offensively as the line collapsed last week, leaving quarterback Matt Ryan exposed to five sacks and 11 hits. The last sack, coming when Aaron Donald easily beat guard Wes Schweitzer, resulted in a lost fumble and a right ankle sprain that could sideline Ryan this week.

Ryan's injury and the frustration of a pitiful 37-10 loss to the Los Angeles Rams caused Jones to speak up.

"Everybody just sat there and watched," safety Ricardo Allen said. "He's a guy that when he speaks, and he doesn't speak very often, everybody is going to listen. You see him and how much he was hurt, how frustrated and confused he is still, it's just like, that's when you know it's serious. You know that we need it from everybody around.

"No, everybody is not going to play like Julio. We are all not as talented as him. But you have to give as much feeling, as much emotion, as much passion as you can."

Jones wanted to remind his teammates that Quinn, despite 11 losses in the last 15 games, is the same man who led the Falcons to the Super Bowl three years ago. Quinn gladly ceded the floor.

"It is by his play and by his style, but when he speaks to the whole group, obviously it carries a lot of weight," Quinn said. "Often times he will do a lot behind the scenes one-on-one. When he goes in front of the entire group, it has a huge impact. It was what we needed at that time. I obviously have a ton of respect for him already both on and off the field."

Notes: Ryan did not participate in practice for the second straight day. He hasn't missed a game since 2009, a span of 154 consecutive starts. ... RB Ito Smith (concussion and neck), DT Grady Jarrett (abdomen) and CB Desmond Trufant (toe) are still sidelined, too.