Jones starts for Patriots but quickly gives way to Zappe 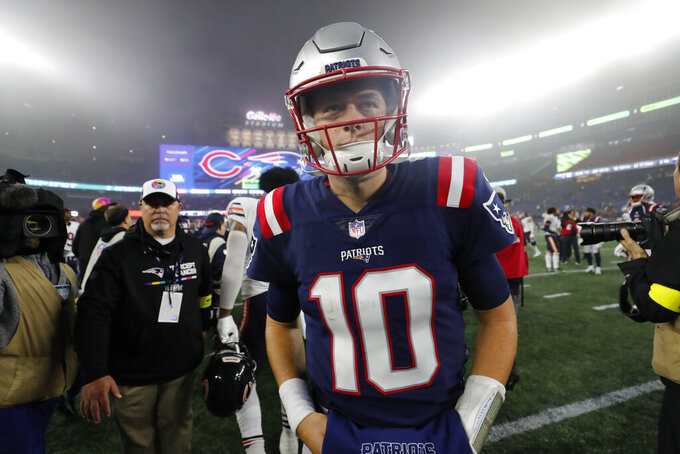 New England Patriots quarterback Mac Jones walks off the field after a 33-14 loss to the Chicago Bears after an NFL football game, Monday, Oct. 24, 2022, in Foxborough, Mass. (AP Photo/Michael Dwyer)

FOXBOROUGH, Mass. (AP) — The Gillette Stadium crowd implored Bill Belichick to make a change at quarterback. They wanted to see the rookie who was sent back to the bench after winning his first two starts as a replacement for the injured Mac Jones.

With fans chanting “Zappe, Zappe!” out went Jones, who was ineffective in his return after missing three games with an ankle injury, and in came Bailey Zappe with 12 minutes left in the second quarter of Monday night’s game against the Chicago Bears.

The switch worked for a while as Zappe led New England on touchdown drives in consecutive series. The 10-0 deficit gave way to a 14-10 lead as visions of Zappe taking over permanently for Jones began swirling throughout New England.

But Zappe faltered in the second half, and the Bears scored 23 straight points on their way to a 33-14 win.

A fourth-round pick from this past year’s NFL draft, Zappe went from posting strong numbers in the first half — 5-of-6 for 109 yards and a 158.3 QB rating – to throwing two interceptions in the second half.

“Just got to get better. Can’t fall off like I did. I’ve got to make some throws. I’ve got to make better decisions on certain things,” Zappe said. “That’s the good thing about having another week. Get back at it tomorrow. Watch film tomorrow. Get ready for next week.”

The decision to insert Zappe came after Jones completed 3-of-6 passes for 13 yards. The Patriots went three-and-out on their first two series of the game with the third series that Jones saw the field ending with an interception.

Belichick said that he always planned to play both quarterbacks. He also bristled at the idea that the quarterback who started the first three games of the season was benched in favor of Zappe.

“I told the quarterbacks that we were going to play both of them, and that’s what we did,” Belichick said.

Jones didn’t think his rough performance opened the door for Zappe to take his place.

“I think Coach Belichick had a really good plan for us. Obviously, that’s kind of internal stuff, but I understood the plan and what was going to happen. Obviously, wish we got off to a better start, and I played a little bit better, but I’ll have a chance to practice and get back into my routine,” Jones said. “Something that I want to work on is getting back in my routine. I’m a very routine person, and I’m excited for this week. That’s all you can do, right? You can’t really look back in the past. Obviously, the game wasn’t good by any of us, and starts with me.”

The presence of Zappe provided an immediate jolt. A downfield connection led to a spinning, leaping catch from Jakobi Meyers for the first score that covered 30 yards. The next series featured Zappe connecting on 43-yard pass to DeVante Parker to set up Rhamondre Stevenson’s 4-yard run that made it 14-10.

A captain, Jones was among the first to congratulate Zappe as he came off the field after the touchdown to Meyers.

Down 17-14, the Patriots lost out on an opportunity to put up more points after Zappe fumbled with 1:32 remaining in the half. New England didn’t pick up a first down on its first two offensive series in the second half and trailed 26-14 heading into the fourth quarter.

Belichick said he scrapped the plan to put Jones back in after the game became lopsided. Now comes the question that figures to dominate the area heading into next Sunday’s game at the AFC East rival New York Jets.

Who should start? Jones or Zappe?

“I guess when Sunday comes, we’ll know. I just, like I said, want to become a better player and prepare like I always prepare and put the hours in every day. My schedule doesn’t change. I’m just going to continue to do that, and hopefully the results will take care of themselves,” Jones said. “There’s some things you can’t control, and I’m just going to control, like I said, my attitude and my effort and come in early, stay late, and do my job.”