Judge and Giants having a hard time getting over the hump 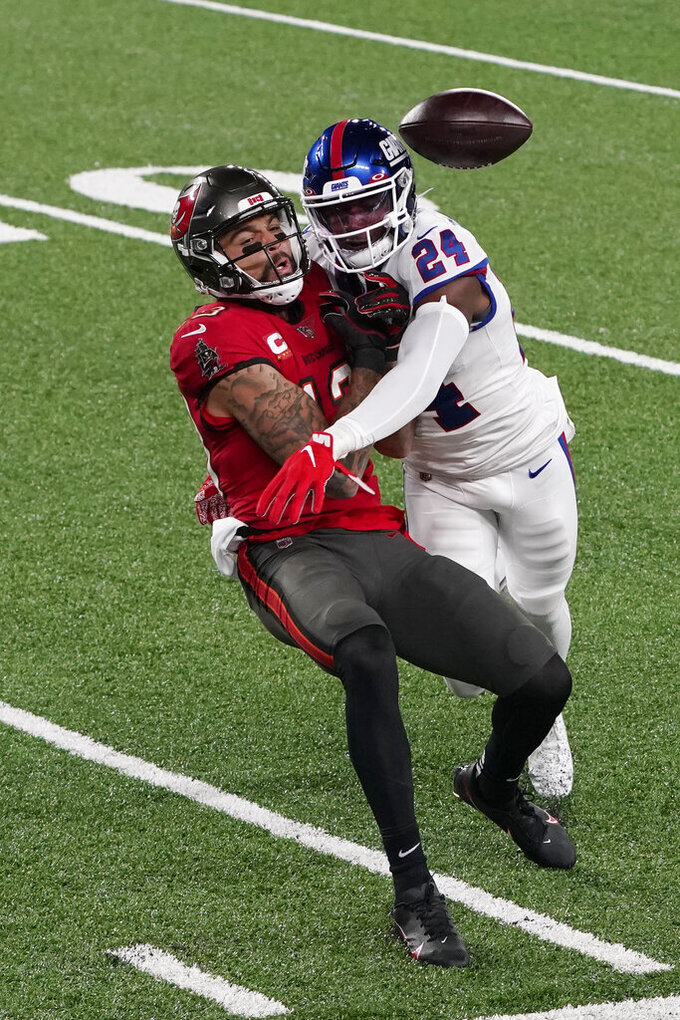 EAST RUTHERFORD, N.J. (AP) — While the New York Giants have the worst record in the NFC, they are going to spoil the season for some teams down the stretch.

Joe Judge and the Giants (1-7) are getting closer to winning. Their past three losses have been by a total of six points. In their seven losses, they have had chances to win or tie games five times in the closing minutes.

The most recent was a 25-23 loss to Tom Brady and the NFC South-leading Tampa Bay Buccaneers (6-2) on Monday night. All the Giants needed was a 2-point conversion in the final minute to force overtime. They just missed on a pass attempt and the officials increased their heartache by picking up a flag for pass interference on the play.

How often do you see that?

This is a young team finding its way and they could cause problems for some of their remaining opponents in the playoff chase — the NFC East-leading Eagles (3-4-1) as well as the Seahawks (6-1), Cardinals (5-2), Browns (5-3) and Ravens (5-2) later in the season.

The Giants probably could have beaten the Bucs if quarterback Daniel Jones had not thrown two second-half interceptions that led to 10 points for Tampa Bay.

“I see this team making a lot of progress,” Judge said Tuesday. “I have seen us being close, obviously in this situation, close isn't good enough in this business. We have to keep pushing forward and get the results that we are working for, but it starts with eliminating those mistakes.”

Do that and it will lay the groundwork for something bigger and better in 2021.

Pat Graham's defense makes the Giants competitive. The front seven is stopping the run and secondary is bending but not giving up the big scoring plays. Tampa Bay was limited to 344 yards and it was 4 for 12 on third-down conversions. The Giants are going to win if the unit keeps it up.

With young players, the hardest thing is getting them experience and then learning from it. Looking back, more often then not the penalties, mental errors and turnovers have cost the team Ws.

“We’re trending in the right direction and I truly believe that,” safety Jabrill Peppers said. “We come to work with the right attitude week in and week out, wanting to get better. We work hard, and pretty soon the results will follow. Not going to get discouraged. It’s the midway point, the season isn’t over, nobody knows what’s going to happen, but I will tell you this, we will continue to play hard, stay together and overcome any adversity.”

The offensive line may have had its best game. Despite missing left guard Will Hernandez (COVID-19), the unit had the running game going, gaining 101 yards on 24 carries against the league's No. 1 rush defense. There were times they had three rookies playing, tackles Andrew Thomas and Matt Peart and guard Shane Lemieux. Since third-year pro Nick Gates is a new center, that's basically four young players.

It's a bear market on Jones' value. After roughly 1 1/2 seasons, the jury is questioning whether the Giants made the right move in taking the Duke product with the No. 6 overall pick in 2019. He has started 21 games and posted a 4-17 record. He has turned the ball over 13 times this season and 36 times in his career. He will show flashes and then he will drive many crazy with bad decisions, such as the two picks he threw under pressure.

CB Logan Ryan left the game in the fourth quarter after a big hit on receiver Tyler Johnson. There was no update on his condition on Tuesday.

7 and 9 — The number of touchdowns and interceptions thrown by Jones. Not the way you want it.

Just keep working. They have games at Washington and against Philadelphia at home over the next two weeks before getting their break. Finishing on a good note will help.