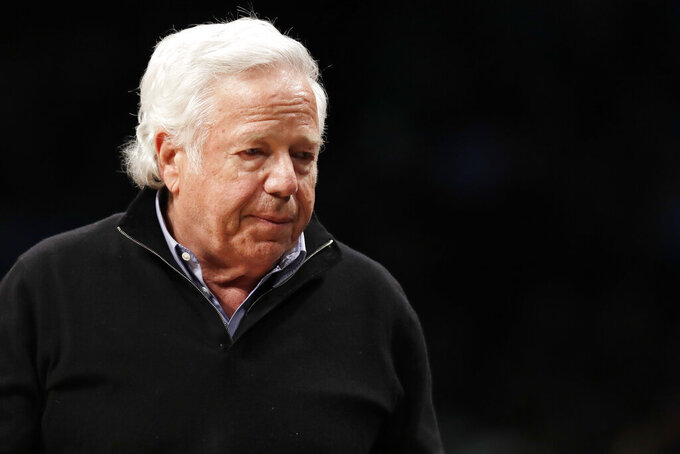 FILE - In this April 10, 2019, file photo, New England Patriots owner Robert Kraft leaves his seat during an NBA basketball game between the Brooklyn Nets and the Miami Heat, in New York. Prosecutors intend to release undercover video of Robert Kraft and others allegedly receiving sex acts at a Florida massage parlor, but that won’t be soon or perhaps ever. The Palm Beach County State Attorney’s Office filed a notice Wednesday, April 17, 2019, saying it believes the videos are public records under Florida law and it plans to release pixilated versions. Spokesman Mike Edmondson said the release is not imminent, as the office is processing numerous public records in the case. Kraft’s attorneys filed an emergency motion Wednesday to block the release. (AP Photo/Kathy Willens, File)

Circuit Judge Joseph Marx on Wednesday barred the release of any video from the Orchids of Asia Day Spa before an April 29 hearing where he will hear from all parties, the Palm Beach Post reported.

Kraft was charged in February with two misdemeanor counts of soliciting prostitution for allegedly paying for sex at the Orchids of Asia Day Spa in Jupiter, Florida. He has pleaded not guilty. Twenty-four other alleged Orchids of Asia customers were similarly charged.

Palm Beach State Attorney David Aronberg wrote to the court in the related case that there is no legal basis to block the videos' release. The Associated Press and numerous other media outlets have requested the videos.

"Absent a Court order, the State will be releasing the requested public records" after they are pixilated, Aronberg wrote. His spokesman, Mike Edmondson, said the release is not imminent as the office is processing numerous public records requests from the case.

Defense attorney Jack Goldberger quickly sent a letter to the judge overseeing Kraft's case, writing that prosecutors are trying to "evade judicial review and end run" around a promise he says they made to await a court ruling on whether the videos are a public record.

"The State's bad faith attempt to circumvent judicial review by simply releasing the Videos" before the judge rules "is an affront to justice and grossly unethical," Goldberger wrote.

David S. Weinstein, a defense attorney and former prosecutor who is not involved in the case, said "there is still no guarantee that the tapes will be released." Prosecutors "are simply stating that they are complying with their duties under the public records laws and they won't be withholding the tapes," he said. Even if the trial judge orders the videos' release, Kraft's attorneys could appeal, he said.

Kraft, 77, is accused of paying for sex acts at the spa twice in January. While fighting the charges, he recently issued an apology saying he had disappointed his family, friends, co-workers, fans "and many others who rightfully hold me to a higher standard."

Kraft said he has "extraordinary respect for women," adding that his morals were shaped by his late wife, who died in 2011.

According to police records, Kraft, who is worth $6 billion, was chauffeured to the Orchids of Asia spa on the evening of Jan. 19, where officers secretly recorded him engaging in a sex act and then handing over an undetermined amount of cash.

Investigators said Kraft returned 17 hours later and was again videotaped engaging in sex acts before paying with a $100 bill and another bill, police said.

Goldberger has previously accused Jupiter police of having "deliberately misrepresented" facts used to get a judge to approve the warrant allowing the cameras' secret installation. Officers used an undisclosed ruse to gain access to the spa days before Kraft's visits.

Jupiter was part of a multicounty investigation of massage parlor prostitution and possible human trafficking that resulted with the arrests of about 300 men and the closure of 10 spas. The spa owners have been charged with felonies. Prosecutors have conceded they found no evidence of human trafficking at the Jupiter spa.

Goldberger also said officers did not exhaust less-invasive means of investigating the spa, and Florida law says audio surveillance such as wiretaps should only be used for serious felonies such as murder or kidnapping and does not list prostitution.

Prosecutors have offered to drop the charges if Kraft enters a diversion program for first-time offenders, as some others charged have. That would include an admission he would be found guilty if the case went to trial, a $5,000 fine, 100 hours of community service and attendance in a class on the dangers of prostitution and its connection to human trafficking. He would also have to make a court appearance and be tested for sexually transmitted diseases.

Prosecutors have said the fine and community service are required by law and are not negotiable.