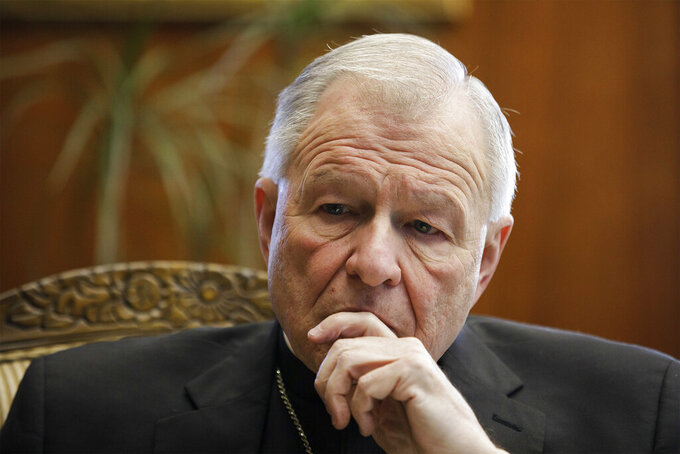 FILE - In this March 27, 2019, file photo, New Orleans Archbishop Gregory Aymond talks with NOLA.com | The Times Picayune at the archdiocese office in New Orleans, La. Aymond has been spotted on the field at New Orleans Saints games and inside the team's Superdome box and has flown on the owner’s private jet. He is known for celebrating stirring pregame Masses. (David Grunfeld/NOLA.com/The Advocate via AP, File)

News outlets and the public will be able to attend a hearing next week in New Orleans on the confidentiality of emails between Roman Catholic officials and the city's NFL franchise concerning clergy sex-abuse scandals.

A state judge in New Orleans ruled Thursday that the Feb. 20 hearing will be open, although she cautioned attorneys that they must not disclose the contents of the emails at that hearing.

As The Associated Press reported last month, victims' lawyers allege that hundreds of Saints emails show team executives did behind-the-scenes public relations damage control amid the Archdiocese of New Orleans' clergy abuse crisis. The team has gone to court to keep the emails from being made public, saying court rules would ordinarily keep them under seal and that the plaintiffs' lawyers want them released “for publicity purposes.”

A court-appointed special master is to determine whether they may be released and will preside over next week's hearing.

The AP has been allowed to intervene in the effort to get the emails released and lawyers for the news cooperative are being allowed to participate in arguments for release of the emails. Until the judge ruled Thursday, the Feb. 20 hearing before the special master was to be closed to the public.

The owners of The Times-Picayune/The New Orleans Advocate, WVUE-TV, WWL-TV and WDSU-TV filed a motion for access to the hearing. A lawyer for the local news outlets said the AP should not be the only media outlet present at the hearing.

Judge Ellen Hazeur agreed. “All the public has a right to it,” she said, ruling from the bench after a brief hearing.

Lawyers for the Saints and the Archdiocese of New Orleans argued that special master hearings are routinely closed. But Hazeur said nothing in her order appointing a special master required a closed hearing.

The Saints, whose devoutly Catholic owner Gayle Benson is close friends with the local archbishop, have disputed as “outrageous” any suggestion that the team helped cover up crimes. They have accused plaintiffs’ attorneys of mis-characterizing what is in the emails.

Benson said in a news release Monday that the NFL team played no role in determining which priests would be named in the list of “credibly accused” clergy, published by the archdiocese.

Attorneys for about two dozen men suing the church allege in court filings that the confidential emails show executives joined in the church’s “pattern and practice of concealing its crimes.” The attorneys contend that included taking an active role in helping to shape the archdiocese’s list of 57 credibly accused clergy, a roster an AP analysis found was undercounted by at least 20 names.