Kamara's dynamism helps Saints passing game get into a flow 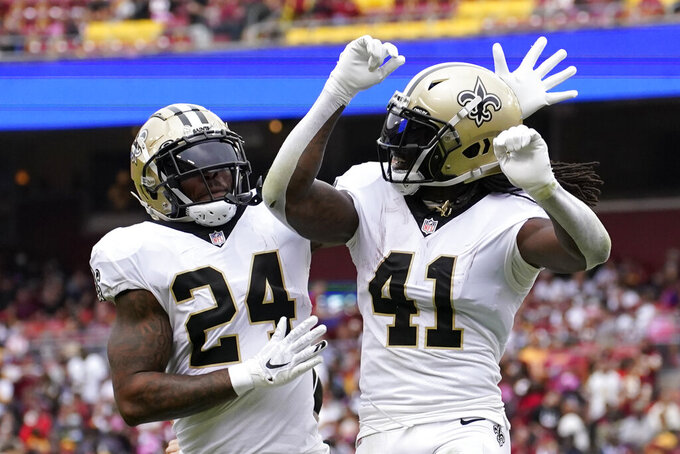 New Orleans Saints running back Alvin Kamara (41) celebrates his touchdown with teammate Dwayne Washington in the first half of an NFL football game against the Washington Football Team, Sunday, Oct. 10, 2021, in Landover, Md. (AP Photo/Alex Brandon)

NEW ORLEANS (AP) — The Saints got back to deploying versatile running back Alvin Kamara in the passing game and also got back to winning.

Kamara's touchdowns rushing and receiving, not to mention his 123 yards from scrimmage in Sunday's 33-22 victory over Washington, helped New Orleans cross the 30-point threshold for the first time since Week 1.

“Any time I’m catching the ball, I love it," Kamara said. “It adds an aspect to our offense.”

Kamara led the Saints in receptions last season. So, it raised questions two weeks ago when the ball was not thrown his way once during a 27-21 overtime loss to the New York Giants. But that game plan was more run-oriented. And when Saints running back Tony Jones Jr. was injured, the Saints relied on Kamara even more in the running game. He finished with a career-high 26 carries for 126 yards.

“Last week, we didn’t throw him a pass and the sky was falling," Payton said facetiously on Monday while discussing the various ways the Saints use Kamara. “You’re still looking at, overall, how’s he handling the football. Obviously, yesterday, he was tremendously impactful with what he was doing.”

For Payton, throwing the ball more made sense against a Washington defense that regularly fielded five-man fronts.

More passing meant eight targets for Kamara, who had five catches for 51 yards.

“We had a chance to kind of exploit what they were doing,” Kamara said of Washington's defensive alignments.

Kamara said he enjoys the return game and joked about why he's not more involved in that.

“I only don't do it because they said they don't got enough money to pay me to be punt returner and a running back and receiver," Kamara, who returned three punts for 29 yards, said laughing. “If they got some more money, I'll do it full time.”

But it was Kamara's dynamic presence on offense that not only paid dividends in terms of his own production, but also provided favorable looks for other receivers.

Even though Winston completed just 15 passes, he threw for a season-high 279 yards. He also passed for four touchdowns, his second most in a game behind the five he threw in a season-opening 38-3 victory over Green Bay.

“We definitely have some areas we've got to clean up,” said Winston, who is completing about 60.3% of his passes and has 12 TDs passing vs. three interceptions in his first season as Saints starting QB. “But we're going to do that and it feels good to get a win going into the bye.”

The deep passing game. Winston has completed four passes of 49 or more yards in his first five games as Saints starter, including touchdowns of 72 and 55 yards to Harris. During the previous two seasons, New Orleans had just three pass plays eclipse 50 yards.

The secondary also has played well. Rookie defensive back Paulson Adebo and veteran P.J. Williams each had their second interceptions of the season against Washington, raising the Saints' total to nine this season, tied for second most in the NFL and only one behind NFL-leading Dallas in that category.

The pass rush. The Saints have eight sacks this season, which ties for 27th in the NFL and just one sack better than worst-ranked Kansas City. It's a sign the Saints are missing 2020 sack leader Trey Hendrickson, who left in free agency, and starting defensive end Marcus Davenport, who's been out since his chest injury in the season opener.

Second-year pro Marquez Callaway had two touchdown receptions — one on a 49-yard desperation pass at the end of the first half. His matchups should only become more favorable when opposing defenses are forced later this season to contend with the return from injuries of veteran receivers Michael Thomas and Tre'Quan Smith.

Cameron Jordan doesn't have a sack yet this season. While the 11th-year defensive end is often the focal point of opposing blocking schemes, he's still found ways to bring down quarterbacks with more frequency in the past. However, his opportunities could conceivably increase after Davenport returns from his injury and interior lineman David Onyemata completes his six-game suspension for a performance-enhancing drug violation.

Reserve QB and part-time tight end Taysom Hill was concussed badly enough while attempting to catch a pass that he needed to be carted to the locker room. Harris has a hamstring pull.

While Payton declined to get into specifics, he said Hill was “doing well.”

3: The number of times punter Blake Gillikin and New Orleans' coverage team forced Washington to open possessions at or inside their 3-yard line.

The Saints go into rest and recovery mode this week, hoping to get a number of key players back from injury when they visit Seattle for a Monday night matchup on Oct. 25.