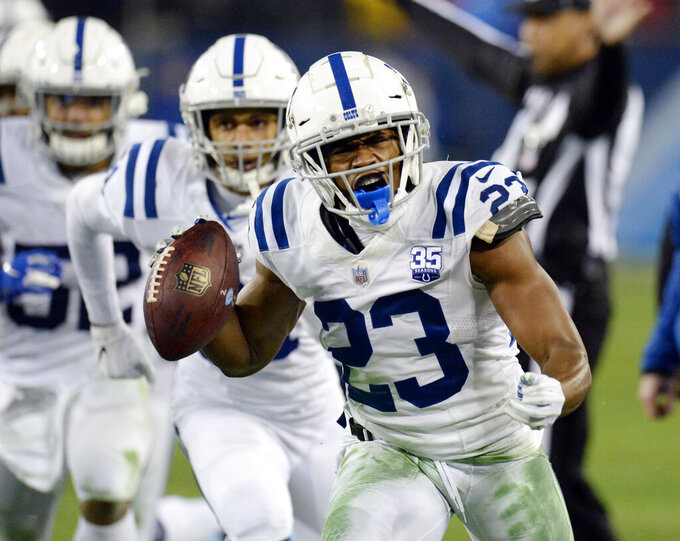 FILE - In this Dec. 30, 2018, file photo, Indianapolis Colts cornerback Kenny Moore (23) celebrates after intercepting a pass against the Tennessee Titans in the second half of an NFL football game in Nashville, Tenn. Moore has agreed to a four-year contract extension with the Colts. He told reporters he was “speechless” following the Colts’ final offseason workout Thursday, June 13, 2019. (AP Photo/Mark Zaleski, File)

INDIANAPOLIS (AP) — All Kenny Moore II needed was a chance. Now the Indianapolis Colts cornerback has a starting job and a lucrative new contract.

Less than three years after entering the league as an undrafted rookie, Moore was rewarded by the Colts with a four-year deal that will keep their top three cornerbacks together through 2021.

Financial details were not immediately available, but NFL Network reported the deal would make Moore the league's highest-paid slot cornerback.

"There's a lot of odds against you, but its possible (to make it)," he said Friday after the team's final offseason workout. "They believe in me."

It's a remarkable ascension for Moore, who didn't play high school football until his senior year. That came at the urging of a friend, who lost his starting job when he was booted off the team. Moore considered joining the Air Force after high school, but played at his hometown college of Valdosta State in Georgia. He appeared in 46 games, including 10 as a freshman.

But at 5-foot-9 Moore was overlooked by NFL scouts.

Instead, he signed with New England as an undrafted rookie in May 2017, was released during September's final cutdown and claimed by the Colts off waivers the next day — after a team scout convinced general manager Chris Ballard that Moore's long arms made up for his lack of height.

He made an immediate impression.

Moore recorded 37 tackles in 16 games as a rookie. Last season, he won the starting job, led the team with three interceptions and finished fifth with 77 tackles.

That was all Ballard and coach Frank Reich needed to see.

"Kenny is the consummate pro," Reich said. "It's not only a high level of play, it's the consistency of play that I really think he embodies. We saw his play-making ability last year on the ball, sack, blitzer, but just really the way he brings that energy every day out at practice. And in the community, he's a leader."

So he stuck to his philosophy of re-signing Colts players' first, even after using a second-round draft pick on cornerback Rock Ya-Sin in April. Ballard has given three players — Moore, punter Rigoberto Sanchez and long snapper Luke Rhodes — contract extensions during the last week.

"He has made it clear that those three guys are what being a Colt is all about," Reich said. "I'm so excited for them. I think that sends the right message. Those are the kinds of guys you want around for the long term."

Keeping Moore should give the secondary some long-term continuity.

Pierre Desir, the other starting cornerback, signed a three-year deal in March, Ya-Sin already has signed his three-year rookie contract and Moore has his big deal, too.

"Along the process, I grew a passion for (football), I grew a love for it," he said. "I learned how to believe in myself, to trust myself, in my own ability."