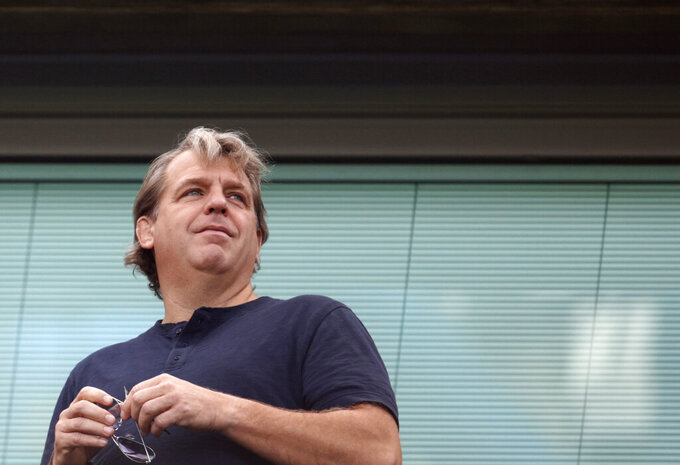 LIVERPOOL, England (AP) — Liverpool manager Jurgen Klopp has balked at a suggestion by Chelsea’s new American owner that the Premier League could introduce an All-Star Game between the best players from the north and south.

A slew of high-profile former players weren't impressed by Todd Boehly's idea, either.

Speaking at the SALT conference held in New York on Tuesday, Boehly said he hoped the Premier League might “take a little bit of a lesson from American sports” and have an All-Star Game that would raise money for clubs lower down English soccer’s pyramid.

The idea was put to Klopp after Liverpool’s 2-1 win over Ajax in the Champions League later in the day and the German coach mocked it.

“What can I say — does he want to bring the Harlem Globetrotters as well and let them play against a football team?” Klopp said.

Klopp’s main issue was that there was no space in an already crowded soccer calendar to fit such a game.

“When he finds a date for that, he can call me,” he said. “He forgets that in the big sports in America, these players have four-month breaks so they are quite happy they can do a little bit of sport in these breaks. It’s completely different in football.”

The MLB, NBA and NHL all hold an All-Star Game in the middle of their seasons. The NFL’s equivalent — the Pro Bowl — now takes place the Sunday before the Super Bowl.

Boehly, who part-owns MLB team Los Angeles Dodgers and owns shares in the NBA's LA Lakers, has made his presence felt since fronting the consortium of businessmen who bought Chelsea for 2.5 million pounds (then $3.2 billion) in May.

With many leading teams — Manchester United, Arsenal, Liverpool and now Chelsea — owned by Americans, perhaps it was inevitable that ideas with a nod to U.S. sports might creep into English soccer.

Just last year, these four teams, along with Manchester City and Tottenham, attempted to help launch a breakaway European Super League along with clubs from Italy and Spain.

The proposal collapsed within 48 hours when the English clubs withdrew amid an escalating backlash from their supporters and warnings from the British government that legislation could be introduced to thwart it.

Boehly’s idea is far less radical but would also change the status quo of English soccer’s traditional calendar which is already packed because of the presence of two domestic cup competitions to go along with the 20-team Premier League.

Gary Lineker was one of many former players to speak out against Boehly's ideas.

Former Liverpool captain Jamie Carragher, working as a pundit on CBS Sports for Wednesday’s Champions League games, said Boehly was being “incredibly arrogant to speak about a league you don’t know.”

“I just think how the American public would feel,” Carragher said, "if an English Premier League football owner went to the NFL and said, ‘We do this in the Premier League.’ I think it's incredibly arrogant to speak like that.

“To speak like that when you've been in the country for such a short time, and he hasn't even proved himself to be a good owner of Chelsea yet.”

“This is Europe and it doesn’t work like that,” Henry said.

Klopp has been an outspoken critic about the demands being put on players because of the increasing number of club and national-team games throughout the year. This season, the World Cup is being held in the middle of an English league campaign for the first time.

Klopp also questioned whether “people want to see” combined teams from the north and south, essentially pitting rival clubs together.

“Imagine that — (Manchester) United players, Liverpool players, Everton players, all together in one team,” he said.

“So all the London guys together?” Klopp added. “Arsenal and Tottenham. Great. Did he really say it? Interesting.”

Boehly also raised the possibility of “a tournament with the bottom four teams” — presumably referring to the Premier League's relegation battle — but didn’t expand on that, when talking as a guest at the SALT conference.