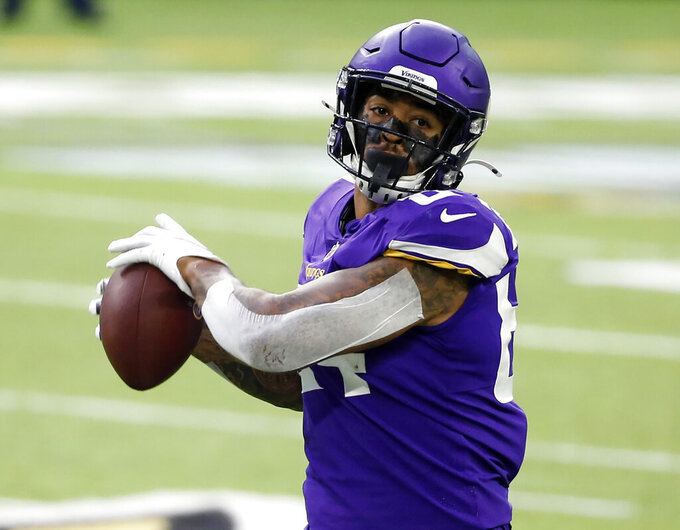 FILE - In this Oct. 18, 2020, file photo, Minnesota Vikings tight end Irv Smith Jr. catches a pass during the first half of an NFL football game against the Atlanta Falcons in Minneapolis. The Vikings have their first significant setback of the season with a knee injury for Smith that requires surgery and will likely sideline him for at least several weeks. (AP Photo/Bruce Kluckhohn, File) 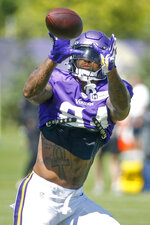 EAGAN, Minn. (AP) — The Minnesota Vikings were dealt their first injury setback of the season, with knee surgery scheduled for on-the-rise tight end Irv Smith Jr. that will likely sideline him for at least a few games.

Coach Mike Zimmer said Monday that Smith will have the procedure done this week by team physician Dr. Christopher Larson. The timetable for Smith's return won't be known until after the surgery on his meniscus, depending on how significant of a repair is required.

“Dr. Larson is one of the best in the country, so we expect a good turnout,” Zimmer said.

The injury to Smith's meniscus occurred sometime Friday during Minnesota's exhibition game at Kansas City, but “it's hard to know exactly what happened,” Zimmer said.

In a system that often uses multiple tight end formations with no established wide receivers behind stars Justin Jefferson and Adam Thielen, Smith was poised for a breakout season following the departure of 11-year veteran Kyle Rudolph.

Tyler Conklin has suddenly become the leading man at the position. Fifteen of his 19 receptions last season came in the final four games, including his first career touchdown.

“Sometimes you get thrown out there and you’re not prepared, but I think in my situation I got to learn from a good vet in Kyle Rudolph. I got to be eased into and basically play a starting role in the last four to six games last year and got to go and have a strong offseason and feel really prepared for Week 1," Conklin said. "I don’t think it could have worked out any better.’’

As for the depth beyond Conklin?

There's simply no NFL experience after Conklin, with Brandon Dillon and rookies Zach Davidson and Shane Zylstra rounding out the current position group — none of whom played for a Division I college. Dillon, who made the 2019 team out of NAIA school Marian University in Indiana, has appeared in four games while spending most of the past two years on the practice squad. Davidson was a fifth-round pick out of Central Missouri. Zylstra was undrafted out of Minnesota State.

The league-wide 53-man cutdowns are on Tuesday, with the strong possibility that the Vikings pick up a new tight end after seeing what moves other teams make.

Smith's agility and burst will be tough to replace for however many games he's out for, but Conklin is a tough, confident player who has been on a steady development track since being drafted in the fifth round in 2018.

“Me and Irv are a lot more similar than people think. We can both run well. We both run routes really well," Conklin said. "I think we just do it in different ways.”

The other injury in camp that has drawn scrutiny over the past few weeks has been a mysterious one to Anthony Barr, unspecified by the team to date, but Zimmer sounded an upbeat note about the progress of the eighth-year linebacker with the season opener 13 days away.

“We’ve got a good plan for him to get him ready to go,” Zimmer said.