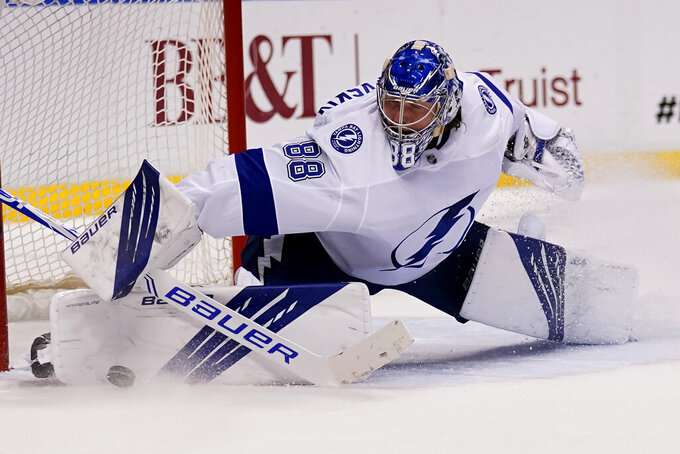 The 20-year-old Knight stopped 36 shots, MacKenzie Weegar and Patrick Hornqvist each had a goal and an assist, and the Panthers beat the Tampa Bay Lightning 4-1 on Monday night in Game 5 of their Central Division playoff series.

The Lightning still lead the best-of-seven series 3-2 and host Game 6 on Wednesday night. But Knight — the third different goalie to start for Florida in this series — stymied the reigning Stanley Cup champions.

“I was just trying to have fun," Knight said. “You know, it's still hockey, right? I'm on this ice every single day. It's just a different setting."

Mason Marchment also scored for the Panthers, and Frank Vatrano added an empty-netter with 14.6 seconds left. Aleksander Barkov and Jonathan Huberdeau each had two assists.

Knight was 4-0-0 after turning pro following his sophomore season at Boston College and signing with the Panthers. And following the struggles of Sergei Bobrovsky and Chris Driedger in the first four games of the series — they gave up a combined 19 goals — the Panthers began dropping hints on Sunday that it would be Knight’s turn, then let more clues emerge at Monday’s morning skate.

They didn’t officially announce Knight as the starter until pregame warmups began Monday. He was told he had the job Sunday. With the way he played, there's no need to wonder who starts Game 6.

Knight stopped each of the last 36 shots he faced. The roars from the crowd started during the national anthem — “... gave proof through the KNIGHT," they shouted — and got louder throughout the night. They even drowned out most of his postgame interview that was played on the Panthers' scoreboard.

“An NHL goaltender, they’re all good," Tampa Bay's Brayden Point said. “He played well tonight. We have to find a way to beat him.”

It took the Lightning all of 53 seconds to get on the board, scoring on the first shot Knight saw. Blake Coleman got past Florida’s Keith Yandle and a sprawling Huberdeau along the right-wing boards, waited for Knight to slide his direction and then tapped the puck back into the slot. Colton had nothing but net to shoot at, and just like that it was 1-0.

Things stayed that way until — for the second time this series — a football coach happened to go a little crazy.

Miami Dolphins coach Brian Flores got the crowd into a towel-waving frenzy in Game 2, and the Panthers quickly responded with a goal. Same thing happened in this one; Miami Hurricanes coach Manny Diaz waved his rally towel, the building got loud and then even louder when Weegar controlled the puck off a face-off and got one over Vasilevskiy’s left shoulder to tie the game with 13:41 left in the second.

And with 3:05 left in the period, Florida took the lead when Marchment — after Barkov went this way and that way behind the net, biding his time before throwing the puck in front — connected from the slot for a 2-1 edge.

Hornqvist deflected in Barkov’s shot from the high slot early in the third, the power-play tally making it 3-1 Florida.

Knight, who had a shutout for USA Hockey in the world juniors gold medal game against Canada back in January, did the rest.

“They defended well in front of him," Lightning coach Jon Cooper said. “We left a lot of plays out there, I wish we could have them back.”

Knight played an elimination game for Boston College two months ago, losing 4-1 in the NCAA Tournament before 1,134 fans in Albany, New York. He beat the Stanley Cup champs 4-1 in front of 11,551 fans — the biggest crowd of the season for Florida — on Monday.

His teammates, one by one, mobbed him when the final horn sounded. And Florida's season lives on for Game 6.

“I could be here until like tomorrow if you want me to say everything I want about Spencer," Barkov said. “He's just great."

The Panthers improved to 4-6 all-time when facing elimination, including the one win it got to stave it off temporarily in last season’s play-in round against the New York Islanders. Tampa Bay is now 18-12 when it has a chance to close out a series.

Knight, at 20 years and 35 days, is believed to be the seventh-youngest goaltender to appear in the Stanley Cup playoffs. Harry Lumley was 18 in his first postseason game and Tom Barrasso, Bill Ranford, Grant Fuhr, Don Beaupre and Martin Brodeur all made their playoff debuts at 19 years old.

He’s the youngest goalie to make his playoff debut in an elimination game.

Monday was a rarity for South Florida. It was only the fourth day with the Panthers and Miami Heat having postseason games on the same day. The others: March 17 and March 20, 2016; and this past Saturday.