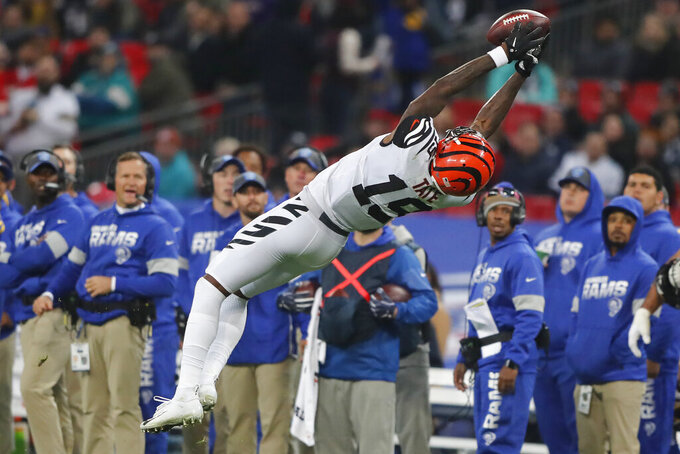 Cincinnati Bengals wide receiver Auden Tate (19) catches a pass against the Los Angeles Rams during the second half of an NFL football game, Sunday, Oct. 27, 2019, at Wembley Stadium in London. (AP Photo/Frank Augstein)

LONDON (AP) — Jared Goff and Cooper Kupp had been waiting more than a month to pull off that trick play.

When the chance finally came, they executed it perfectly.

Goff hit Kupp for a 65-yard touchdown pass on a double reverse flea-flicker on Sunday, treating the London crowd to a highlight-reel play as the Los Angeles Rams beat the winless Cincinnati Bengals 24-10 at Wembley Stadium.

For Kupp, it was one of several highlights on a day when he caught seven passes for a career-high 220 yards. But none had a bigger impact on the game as it put the Rams (5-3) ahead for good, 17-10 in the second quarter.

"We've been trying to run that for a few weeks now," Goff said of the flea-flicker. "I joke about it (with the coaches), we don't run any trick plays. That was the first and best one we've ever had. And it was a good one. Maybe we can talk Sean (McVay) into doing a few more now."

McVay, the Rams head coach, said they've had the play drawn up since running a double reverse against the Browns on Sept. 23. Goff said McVay called the same play last week during a win over the Falcons, but that they "thought better of it" that time.

But this time it worked perfectly, albeit with a bit of luck.

Wide receiver Robert Woods ran a reverse and tossed the ball back to Goff, who then hit Kupp along the right sideline. The receiver benefited from corner B.W. Webb falling down as he tried to make a play on the ball.

"I thought I was going to get whacked on it. But he fortunately lost his footing," Kupp said. "Jared did a great job of throwing the ball into that window."

Kupp also made a 40-yard catch at the start of the third quarter but didn't have another grab for the final 27 minutes of the game. He already had a career high by halftime, with 165 yards.

"Something like that only comes about when you have 11 guys on offense executing and doing what they're supposed to do," Kupp said.

"Another tough one," Taylor said. "Feels like I'm a broken record a little bit."

The Bengals managed to keep it close in the first half, mainly thanks to a much-improved run game. But trailing 17-10 near the end of the second quarter, they missed a chance to cut the halftime deficit to four points when Andy Dalton was sacked on third-and-10 at the 30-yard line, taking them out of field-goal range.

Todd Gurley added a 3-yard rushing touchdown to put Los Angeles up 24-10 early in the third quarter as the Rams earned their first win over the Bengals since 2003. They had lost the previous three meetings.

"I feel like we were right in this game for the majority of the game," Dalton said. "There's been nothing from this team that has gone in the tank, given up."

Rams left tackle Andrew Whitworth, who spent his first 11 NFL seasons with the Bengals, became the 12th player to earn a victory as a starter against all 32 NFL teams.

The only positive for the Bengals is that they may finally have found a running game. Cincinnati entered the game last in the league in rushing but finished with 104 yards on the ground. Of those, 47 came on the 75-yard touchdown drive in the second quarter — including Mixon converting a fourth-and-1 on their 45.

Mixon finished with 66 rushing yards, while Giovani Bernard had 31.

Rams: Wide receiver Brandin Cooks left the game in the first quarter with a concussion after taking an early helmet-to-helmet hit. Cooks was tackled by Jessie Bates III when trying to catch a pass from Jared Goff on the Rams opening drive.

Bengals: Left tackle Cordy Glenn and wide receiver A.J. Green were both inactive again. Glenn and Green have yet to play this season but took part in practice on a limited basis this week. Glenn missed the first six games with a concussion and was suspended for last week's game against Jacksonville. Green is still recovering from ankle surgery during training camp.

Bengals: After a bye week, Cincinnati hosts the Baltimore Ravens on Nov. 10.

Rams: Los Angeles gets a week off, then plays at the Pittsburgh Steelers on Nov. 10.