Kupp moves on from All-Pro year with Robinson, without Woods 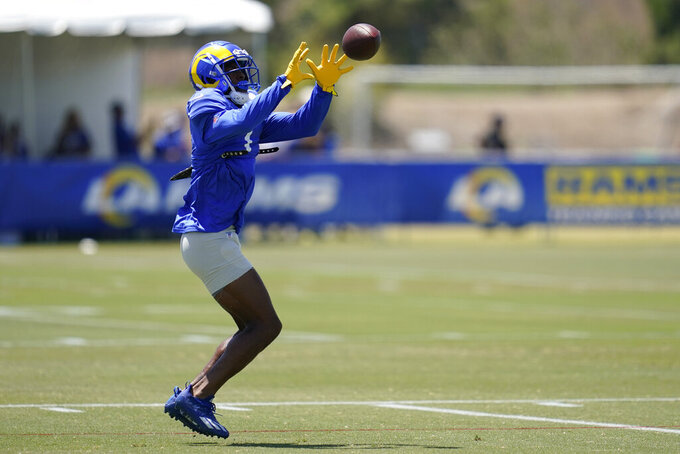 THOUSAND OAKS, Calif. (AP) — Cooper Kupp and Robert Woods were just about as close as two receivers can be during their five seasons together with the Los Angeles Rams.

They worked out together, studied together and built a lifelong bond that will outlast Woods' surprising offseason trade to Tennessee.

As Kupp begins his attempt this month to build on one of the greatest seasons by a pass-catcher in NFL history, he won't have Woods by his side. Instead, newcomer Allen Robinson has stepped in with a hunger for success and a playing style that appears to complement Kupp quite well.

After sitting out the preseason, they'll finally play a game together Thursday night against the Buffalo Bills.

“I think at this point, everyone is pretty much ready to move on and see what 2022 is about,” Kupp said. “I think that’s been the thing from the very beginning: What can we be about? It’s a new year, and what’s the old saying? Rent comes due every day.”

Even with several months' distance, Kupp's 2021-22 numbers are mind-boggling: He led the NFL with 145 catches for 1,947 yards and 16 touchdowns in the 17-game regular season, becoming the fourth receiver in the Super Bowl era and the first since 2005 to win the so-called triple crown of receiving.

He built on his first career All-Pro season and his AP Offensive Player of the Year award in the playoffs, making 45 more catches for 625 yards and six touchdowns. The last score was the most important, because it turned out to be the winning points in the Super Bowl on a 1-yard catch with 1:25 to play.

Kupp won the Super Bowl MVP award with eight catches for 92 yards and two TDs. What followed was an offseason of awards, plaudits, public recognition and stardom at a level he hadn't experienced.

He appreciated the attention — well, not all of it, since he decided he hates dressing up to walk red carpets — but he quickly trained his focus back to the day-to-day NFL grind.

He'll do it without Woods, who was dealt for a sixth-round pick shortly after the Rams lost Von Miller in free agency and elected to turn their resources to what general manager Les Snead saw as an upgrade at receiver.

Woods joined Todd Gurley and Jared Goff in the dubious club of key Rams players who were signed to massive contract extensions by Snead and then traded or released before those extensions even began.

Robinson has three career 1,000-yard seasons and a reputation as a sure-handed, big-bodied receiver who excels on jump balls. He appears to be fitting in well with the Rams, and his no-nonsense attitude underlines the importance of this opportunity for a 29-year-old receiver finally getting a chance to play for one of the NFL's elite teams after eight seasons in Jacksonville and Chicago.

“The most important thing is just focusing in on the nuances of what I need to do and get accomplished to make this offense better,” Robinson said. “Every day for me is about staying locked in, staying in tune with what’s being asked, and polishing it.”

Kupp and Robinson will be particularly important to the Rams until the return of Van Jefferson, who started all 21 games last season. Jefferson had knee surgery early in training camp, and his absence seems likely to extend beyond the season opener.

With Odell Beckham still unsigned and recovering from knee surgery, the Rams' other receivers are all young and untested: Ben Skowronek, Tutu Atwell, Brandon Powell and undrafted rookie Lance McCutcheon.

Quarterback Matthew Stafford is likely to lean on his veteran duo to get the Rams off to a strong start.

“He’s been so good for us through this whole time, through the OTAs to training camp,” Kupp said of Robinson. “To be able to play some meaningful football now is going to be really fun. To see him as a competitor and see the dog come out, just to go through a real game with him, is going to be fun. I know he’s pumped to get out there and compete.”

“You don't want to swing a helmet ever, just at anybody in general," Morris said. “But there are helmets ripped off at times. You never, ever want to do those things. You don't want to have that on your resume. ... But at the same time, those things happen in practices. They're mistakes, they're errors and they're correctable.”

Donald hasn't offered an outright apology for his actions, but he characterized it as a typical joint practice skirmish that got out of control.

“I’m happy nobody got hurt in the practices or whatever, but I’m just focused on Buffalo,” he said. "Everybody protected each other, everybody got out of the situation clean, and that’s what’s important.”