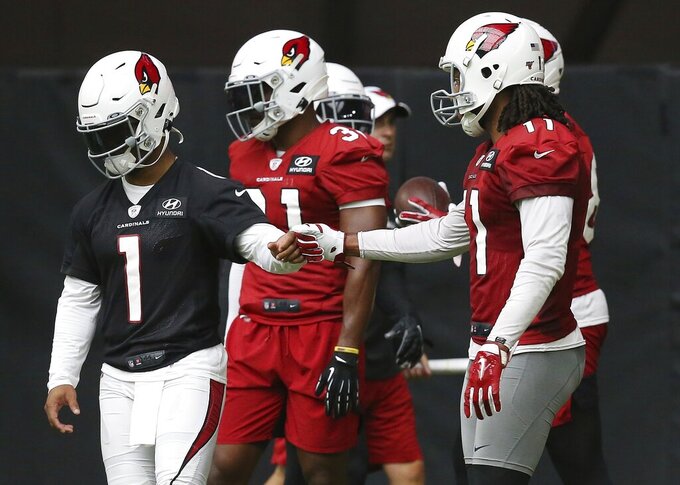 GLENDALE, Ariz. (AP) — Kyler Murray took off around the left end of the line, made a quick cut and raced through the secondary for a big gain, drawing a rising roar from the fans who watched it unfold right below them.

OK, so it was one run during a training camp practice. Murray wasn't allowed to be hit, wasn't even wearing pads.

Even so, the burst and bolt was what the Cardinals and their fans had hoped to see from the No. 1 overall pick in this year's draft.

The next step is doing it against NFL teams intent on squashing Arizona's diminutive quarterback.

After an offseason of seeing what Murray can do firsthand, Cardinals players have no doubt the show he put on at Oklahoma will continue in the pros.

"He's been really impressive, on and off the field," Cardinals receiver Trent Sherfield said Saturday before Arizona's first practice in pads.

The Cardinals were so enamored of Murray's skills, they used the top pick in this year's draft to take the reigning Heisman Trophy winner despite using the No. 10 overall pick last year on Josh Rosen, who was traded to Miami.

They saw Murray as a generational talent, a game-changing quarterback who would be a perfect fit for new coach Kliff Kingsbury's offensive experiment in the desert.

Other teams have implemented versions of the Air Raid-style offenses that have been so successful at the college level, but none has gone all-in with it as Kingsbury is attempting.

Murray will be the key to making it work.

Though undersized for an NFL quarterback at 5-foot-10, he's a pinpoint passer who can avoid long-armed defensive lineman by changing arm angles, similar to Kansas City's Patrick Mahomes. He's an adept passer on the run and can use his agility to escape oncoming pass rushers, a la Seattle's Russell Wilson.

Murray also has the speed to turn an innocuous scramble into a game-changing touchdown run, as Michael Vick did in his prime.

Whether Murray can live up to those lofty comparisons remains to be seen. He hasn't been hit in practice, much less in a game, nor has he seen the speed and ferocity of a live NFL game.

He does have confidence. Lots of it.

Not the hollow, chest-puffing, look-at-me type of confidence. The type of confidence that comes with being successful at every level he's played; winning a Heisman Trophy after one year as a starter; becoming the first person drafted in the top 10 of the NFL and Major League Baseball drafts.

"When you look in his eyes, there's nothing timid about him," Cardinals veteran receiver Larry Fitzgerald said. "He looks confident, he looks ready to go and that's a great sign for a young quarterback."

Murray also has a pair of advantages over other would-be rookie starting quarterbacks.

The first is Kingsbury's system.

Though new to the NFL, Murray knows it inside out. Oklahoma ran a similar offensive system as Kingsbury did at Texas Tech and Murray did pretty well with it, racking up more than 5,300 combined yards and 53 touchdowns.

Murray also knows the terminology, putting him ahead of Arizona's veteran players, at least during the offseason.

"It's helped me a lot, coming in and being more comfortable," Murray said. "If I was to go anywhere else, play for another guy, have to learn a whole new system, a whole new offense, it would be a lot hard, obviously. For me coming into this system, Day 1 and through rookie minicamp, I'm probably more comfortable than any other quarterback out there."

Murray also enters the season as Arizona's undisputed starter. No quarterback battle, no waiting his turn behind a veteran.

The downside could be immediately throwing a rookie into the NFL fire, but the upside is he has no distractions during camp, no questions about his role. He's also had the support of his teammates from the day he first stepped on the practice field, further bolstering his confidence.

"Everybody in this locker room knows he's going to be here," Fitzgerald said. "First pick overall, guys understand, it's going to be his show. You want to be a part of it? Get on board."