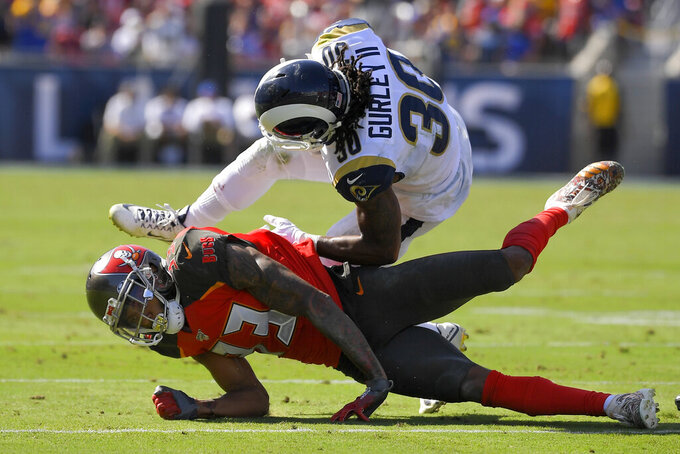 THOUSAND OAKS, Calif. (AP) — Todd Gurley missed practice Wednesday with a bruised left thigh, and the Los Angeles Rams don't know whether their star running back will play against the San Francisco 49ers on Sunday.

Coach Sean McVay says Gurley's injury "caught us all off-guard" when Los Angeles went back to work following several days without practice. The Rams (3-2) haven't played since last Thursday, when they lost 30-29 at Seattle.

A difficult matchup for the Rams would be even tougher without Gurley, their top ball-carrier for five seasons. Since McVay took over in 2017, Gurley is the NFL's leader in yards rushing (2,826), yards from scrimmage (4,262) and rushing touchdowns (35).

McVay refused to predict whether Gurley will face the Niners at the Coliseum.

"He's so tough and he plays through so many different things," McVay said. "But there's still so much time (before Sunday). Even though we did play on a Thursday, we want to be smart with him."

The team initially thought Gurley's thigh problem was typical postgame soreness, but the Rams held him out of practice along with cornerback Aqib Talib, who has bruised ribs. Being without either veteran would be a significant setback to the Rams' hopes of ending their two-game losing streak — just their second skid of McVay's career.

"You think it's your typical bumps and bruises, and then it ends up being a little bit more than that," McVay said.

Ever since Gurley missed playing time down the stretch of Los Angeles' Super Bowl run last season with a balky left knee, the running back's health has been a constant source of conversation around the defending NFC champions.

That's much to the dismay of Gurley, who has grown increasingly curt about the knee woes that could be the Rams' primary motivation for his decreased workload on Sundays this season.

Gurley is a quiet 18th in the NFL this season with 270 yards rushing. He also has 14 receptions, but his overall touches are down significantly after he was in the NFL's top five in each of the past three seasons.

The Rams insist they aren't managing Gurley's playing time, but opposing coaches have all agreed Los Angeles is trying to keep Gurley fresh for the long haul of this season and several more afterward. Gurley's four-year, $60 million contract extension — with a record $45 million guaranteed — doesn't even kick in until next year.

Malcolm Brown has 114 yards and two touchdowns in his fifth season as Gurley's backup. Brown never had more than 63 carries in a season during his first four years behind Gurley, but the gifted athlete already has 26 carries in five games.

"Fortunately for us, we've got some depth at that position," McVay said. "Whether it's this week, at some point, the confidence that we have in Malcolm, but there's also going to be a time we rely on (rookie) Darrell Henderson. It might end up being this week."

The Rams faced a challenge to run the ball against the 49ers even without Gurley at full strength. San Francisco has the NFL's fifth-best defense against the run, allowing just 81.8 yards per game — and representing the third straight week in which the Rams must face a top-five rushing defense.

Opponents have loaded up against the Rams' zone running plays frequently this season after seeing New England's success with similar schemes in the Super Bowl. The Rams still have a winning record with Jared Goff's passing game carrying much of the offensive load, but McVay and his assistants are eager to get back to a balanced attack.

"Some weeks, obviously, Todd is a great running back and people want to load up against him," passing game coordinator Shane Waldron said. "It's going to force Jared to throw the ball a little bit more. Different weeks, if they're going to provide a little bit more balanced opportunities, then that's where we'll get to that."

NOTES: WR Brandin Cooks was limited in practice after incurring a concussion, but McVay expects him to play against the Niners. ... Rookie S Taylor Rapp (ankle) and LB Bryce Hager (shoulder) also were limited while they return from injuries that kept them out last week.