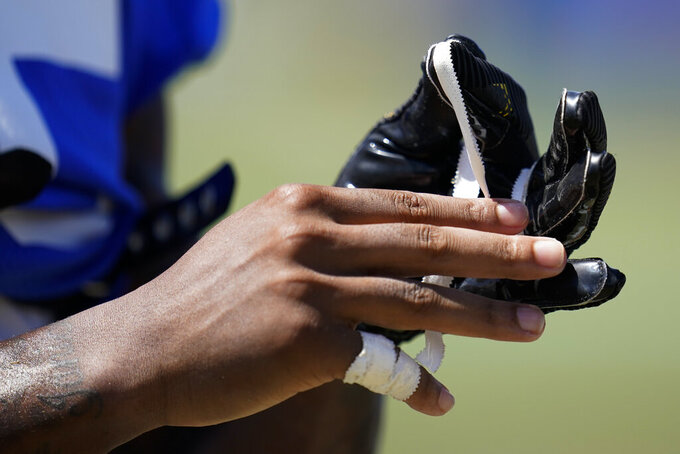 THOUSAND OAKS, Calif. (AP) — Tutu Atwell didn't get to play for the Los Angeles Rams during the preseason, and that's how he knows his second NFL season is off to an excellent start.

Coach Sean McVay shows his disdain for the injury risks in the NFL's exhibition schedule by refusing to suit up practically any player he expects to make a significant contribution during the regular season. By not touching the field in August, Atwell knows he'll be on the grass in September and beyond — and that's more good news for a speedy second-year receiver who's back in the mix after his rookie season started quietly and ended early.

“I just had to find myself,” Atwell said Friday. “In my first year, I had to get the feeling of everything, and I feel like I did that. In Year Two, it’s time to put on a show for everybody and see what I can do.”

Atwell acknowledges he would have liked to play last month, but he's already off to a strong restart with a series of head-turning practices in training camp with the Super Bowl champions.

“I was a little anxious to get out there to show the fans and show the world,” Atwell said of his preseason. “But I guess Coach respected my game, and I respect that. I appreciate him for believing in what I can do to help the team.”

The Miami native who starred at Louisville was a somewhat surprising second-round pick by the Rams, and he never got the chance to do much as a rookie to justify his high selection. Cam Akers and former tight end Gerald Everett are the only players selected higher than Atwell over the past six drafts by Rams general manager Les Snead, who hasn’t made a first-round pick since 2016.

Atwell returned kickoffs and punts as a rookie, but he got just 10 offensive snaps in the first half of last season before a shoulder injury sidelined him for the year. Right before the injury, McVay told reporters he wanted to see more urgency from Atwell — a simple declaration that amounts to a significant criticism from McVay, who rarely says anything even mildly negative about his players.

A season-ending setback was a shock for Atwell, who had never had a significant injury before. He filled his suddenly empty hours on the West Coast with rehab, television and hundreds of hours of Call of Duty: Warzone.

“It was hard and depressing," Atwell said. “Stressful. Boring. There’s a whole bunch of things. I could go on and on. But watching the games and seeing your team winning, them doing the right thing, just helped me and motivated me.”

Indeed, the Rams won nine of their final 10 games, culminating in the Super Bowl victory over Cincinnati. Atwell watched his teammates' success from the sideline and celebrated their championship, but he took no personal satisfaction from it.

“It was like being a spectator,” Atwell said. “We play for each other, so I know those guys are out there playing for me, and I’d be doing the same for them."

Atwell's offseason growth began with a text to All-Pro Cooper Kupp, who won the NFL's triple crown of receiving and the Super Bowl MVP award last season. Atwell told Kupp he wanted to be great, and Kupp immediately took the younger pro under his wing in the weight room, the meeting room and on the field.

“There’s that growth you have to go through, matching the physicality of what this game is,” Kupp said. “I think he’s done a really good job stepping up to the plate.”

At 5-foot-9, Atwell is smaller than most NFL wideouts, but he’s also faster. He’s also a four-year starting high school quarterback who prides himself on seeing the whole field, and he has been studying film since he was 8 years old with his father, a former collegiate receiver.

“He wants me to look at that and throw your own sauce on that,” Atwell said with a laugh.

The new season is off to a strong start, and Atwell is eager to play whatever role he gets from McVay. He's currently a second-string option on the depth chart, but Van Jefferson's early season injury absence should give Atwell more opportunities to shine.

“To be honest, it doesn’t matter what role I get,” Atwell said. “When they call Tutu, no matter what they call, I’m going to do it.”

NOTES: The Rams elected their team captains, choosing All-Pros Aaron Donald, Jalen Ramsey and Kupp, along with Matthew Stafford, right tackle Rob Havenstein and newcomer Bobby Wagner. Havenstein, one of the two remaining St. Louis Rams on the roster along with Donald, is a captain for the first time.