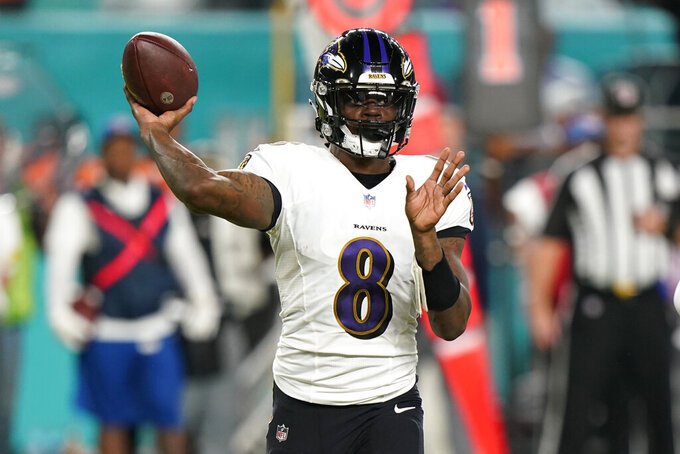 Baltimore Ravens quarterback Lamar Jackson (8) aims a pass during the first half of an NFL football game against the Miami Dolphins, Thursday, Nov. 11, 2021, in Miami Gardens, Fla. (AP Photo/Wilfredo Lee)

Jackson said Wednesday he's feeling better and fully expects to play Sunday night for the Baltimore Ravens against Cleveland. He was also at practice, three days after missing a victory at Chicago because of an illness.

Jackson missed practice Wednesday and Thursday last week, then seemed OK when he practiced Friday and said he was feeling better. But he was added to the injury report Saturday and wasn't able to play in the game.

Now Jackson says he thinks he’s back to normal.

“I want to get out there and just go. I don’t want to limit myself or have coach limit me or anything like that,” Jackson said. “I want to grind with my guys, because I haven’t in a whole week.”

Last week, Jackson said his illness may have been a cold, but that was before he took another turn for the worse and missed the game.

“I have no clue. I just got fatigued, had some little chills, was out of it,” Jackson said Wednesday.

Baltimore (7-3) plays only its second AFC North game of the season this weekend. The Ravens lead the division, but are only 1 1/2 games ahead of the last-place Browns.

The Ravens managed to beat the Bears 16-13 while Jackson was out — with backup Tyler Huntley guiding the team to a dramatic winning touchdown in the final minute.

“When he did that last drive, I felt like I wasn't sick anymore," Jackson said.

Huntley went 26 of 36 for 219 yards with an interception. The Ravens were able to control the ball for 38:50, but that was against a Chicago team that is well under .500. And even against the Bears, Baltimore was outgained on the day and averaged only 3.9 yards per play.

This week, Jackson is not only trying to come back from his illness, but he's also trying to rebound from perhaps Baltimore's worst performance of the season — a 22-10 loss at Miami on Nov. 11, the most recent game he played in. The Ravens had a hard time dealing with the Dolphins' blitzing, so that might be a strategy they see from Cleveland this weekend.

In addition to Jackson's absence, the Ravens were also without their top receiver against Chicago. Marquise Brown was out with a thigh injury. He was back on the practice field Wednesday.

Tight end Nick Boyle has returned as well. He played his first game in more than a year against Chicago after dealing with a number of leg-related problems.

“I had a hamstring, meniscus, PCL, MCL, little fracture," Boyle said. "And then I had a cleanup late.”

Jackson's illness may seem mild compared to all that, and it's noteworthy that he has generally stayed healthy despite the fact that he runs the ball quite a bit for a quarterback. Still, the past couple of seasons haven't been easy for him.

He missed a game last season when the team was dealing with a COVID-19 outbreak, and then he tested positive at the start of training camp this year. Coach John Harbaugh made it clear that Jackson's most recent illness wasn't COVID-19, but it was bad enough for the star quarterback to miss a game.

“I've been healthy all my life. I've never had a problem being ill at all until I'm here," Jackson said. "So I don't really know what that is, but hopefully that's done with.”