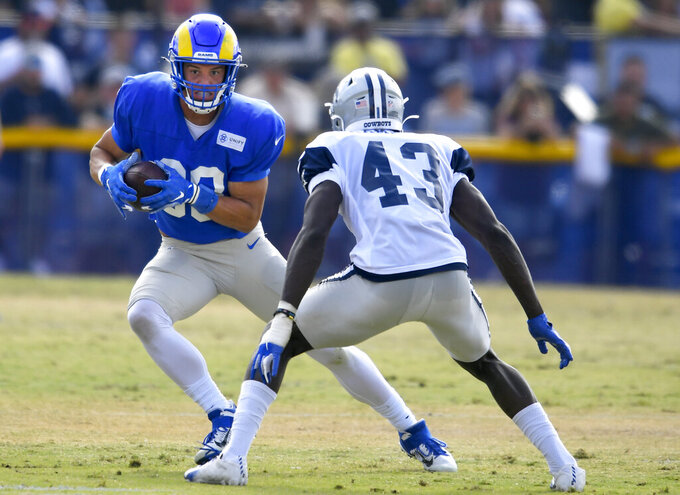 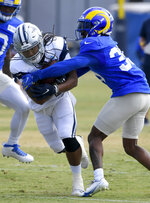 OXNARD, Calif. (AP) — CeeDee Lamb looks as if he'll be frustrating the NFC East for many years to come, filling the role DeSean Jackson held in seasons past.

Although they were working on opposite fields, the two wide receivers for the Dallas Cowboys and Los Angeles Rams made some of the standout plays during a frisky joint practice Saturday.

Lamb got behind Rams cornerback David Long Jr. to catch a touchdown pass from Garrett Gilbert, and he made a leaping high-pointed reception in front of Darious Williams later on. Cowboys coach Mike McCarthy said those memorable moments were nothing new from Lamb during training camp.

“I don’t think there hasn’t been a day where he hasn’t made a big play, so he’s been very consistent this camp,” McCarthy said.

Although Lamb had 74 receptions for 935 yards and five touchdowns after being drafted 17th overall, he still had to deal with the highs and lows most rookies go through. With the benefit of that experience, Lamb has been steadier in the buildup for his second season in the NFL.

Linebacker Jaylon Smith expects Lamb to solidify himself among the top receivers in the NFL this year. More than that, Smith expects Lamb will establish himself as the next great Cowboys wide receiver in a special lineage for a jersey number that includes Drew Pearson and Michael Irvin.

“He’s confirming why he wears No. 88,” Smith said. “That’s what we all see, players, the coaches, fans, spectators, reporters. He’s the new No. 88, and greatness is expected when you’re wearing that number.”

While Lamb finds his way in the league, Jackson goes into his 14th season looking to continue his knack for catching the deep ball, something all too familiar to the Cowboys after eight years in two stints with Philadelphia and another three years in Washington.

Jackson couldn’t help but recreate some of those painful memories as he caught a long pass off a bootleg by Matthew Stafford late in practice. The two newcomers to the Rams had just missed connecting on a similar play earlier on.

Wide receiver Cooper Kupp has been impressed by the early chemistry between Jackson, who has averaged 17.4 yards per reception in his career, and Stafford.

“Just the ability for DeSean to track the ball like he has, Matthew getting the ball up there, putting air under it and letting guys run underneath it, and that’s just gonna continue to grow,” Kupp said.

The Rams signed Jackson as a free agent in March after a lack of explosive plays in the passing game hindered the offense the past two seasons. Kupp said Jackson is teaching his new teammates how to create more of those opportunities in addition to still offering the speed to get down the field.

“One of the things that I really appreciate about DeSean is his willingness to share the experiences that he’s had, things he’s seen,” Kupp said. “He’s one of the greatest deep ball catchers. His stats speak for themselves, what he’s done in terms of running the deep ball.”

While Jackson and Lamb delivered many of the highlights, perhaps the most memorable moment came when Rams defensive tackle Aaron Donald and Cowboys offensive lineman Connor Williams sparked a brief but intense fight. Williams got the better of Donald during one-on-one pass rush drills, but the three-time AP defensive player of the year returned the favor during team drills, leading to the fracas.

Although there were several instances afterwards where it looked as if another fight between the teams was possible, there were no further incidents.

“I didn’t think it affected our ability to get the work in that we wanted, and that was the goal for today,” Rams coach Sean McVay said.

For his part, Smith liked the energy both teams brought to the workout.

“You play football before? You getting rowdy? It’s a chance to come together, camaraderie standpoint. Being there for your brother,” Smith said. “But it was nothing excessive. Great sportsmanship for the most part, but there was a lot of great competition out here today.”

NOTES: Cowboys QB Dak Prescott (shoulder strain) did some light throwing at the start of practice. McCarthy said Prescott is “making a lot of progress” but will be brought back cautiously. … Rams WR Tutu Atwell avoided injury after crashing into pads covering a scissor lift in the middle of the two fields. “It didn’t sound good, but he seemed like he was OK,” McVay said. … Cowboys WR Amari Cooper is dealing with a shoulder injury that will “need a couple days,” McCarthy said.