From Lambeau to AT&T Stadium, NFL sites have made a big leap 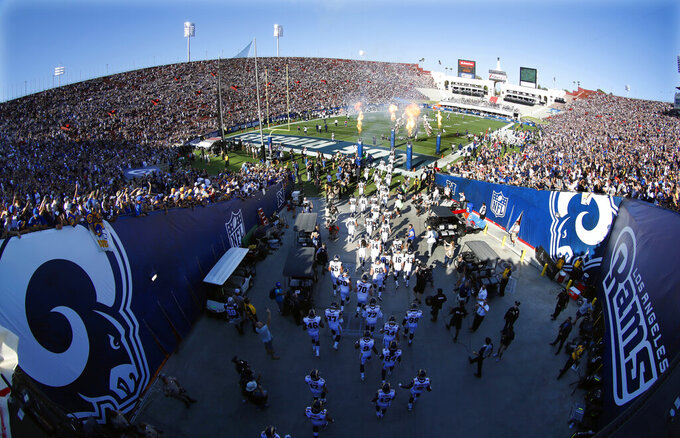 FILE - In this Aug. 13, 2016, file photo, the Los Angeles Rams take the field at Los Angeles Memorial Coliseum for a preseason NFL football game against the Dallas Cowboys, in Los Angeles. Opened in 1923, the Coliseum first gained the Rams as a tenant in 1946 when they moved west from Cleveland. (AP Photo/Ryan Kang, File)

Perhaps no part of the NFL has evolved more drastically over 100 seasons than the actual places where the games have been played. From the baseball parks some of the league's pioneering teams were shoehorned into during the early days to the billion-dollar palaces been built lately with enough high-definition screens that all 70,000 fans can see the slow-motion instant replays at every angle.

Here's a look at some of NFL's most iconic and impactful venues over the years:

Opened in 1923, the Coliseum first gained the Rams as a tenant in 1946 when they moved west from Cleveland. The Raiders played there from 1982-1994 in their L.A. stint between stays in Oakland. Then the Rams came back in 2016 from St. Louis for a final reunion until they move into their new stadium in Inglewood in 2020. The Coliseum will host a third Summer Olympics in 2028.

Opened in 1924 next to Lake Michigan, Soldier Field became host of the Bears in 1971, after they played 50 years in front of the brick and ivy at Wrigley Field. The colonnades remained after the renovated stadium re-opened in 2003 following a one-year stay for the team at the University of Illinois in Champaign.

The Packers moved into the new City Stadium, a bigger version across town that was considered the NFL's first football-specific facility, in 1957. Eight years later, it was renamed for the famed franchise's first head coach, Curly Lambeau. The Packers won their first Super Bowl after the 1967 season after beating Dallas in the NFL championship game, known as the "Ice Bowl," on a last-second quarterback sneak by Bart Starr after a kickoff temperature of 13 degrees below zero.

Opened in 1961, this stadium near the brisk San Francisco Bay gained the 49ers as a tenant in 1971. The facility, which was much windier for baseball games than it was for football, hosted five Super Bowl championship teams, ranging from the 1981 to 1994 seasons, as future Pro Football Hall of Fame members Joe Montana and Jerry Rice formed one of the league's greatest passing games. Montana's throw to a stretched-out Dwight Clark in the back of the end zone in the NFC title game against Dallas, known as "The Catch," sent the 49ers to their first Super Bowl and helped put the 'Stick on the NFL map.

One of the many cookie-cutter, circle-shaped, multi-purpose facilities of the era, Three Rivers Stadium opened in 1970 for the Steelers, who won four Super Bowl championships during their residency along the riverbanks. One of the most famous plays in NFL history took place here in 1972, when the "Immaculate Reception " by Franco Harris off a deflected pass in the closing seconds gave the Steelers a playoff game victory over Oakland. That was the franchise's first postseason win after going the first 40 years without one, the first 37 of which were at Forbes Field and Pitt Stadium.

Opened in 1971 in the suburb of Irving, the stadium featured a European soccer-style partial roof with a rectangle cut-out that cast long shadows on the turf and kept the game outdoors while still sheltering fans from the weather. Or, as Cowboys linebacker D.D. Lewis was widely purported to have explained the reason for the hole was "so God can watch his favorite team." The Cowboys won five Super Bowl championships during their stay at Texas Stadium.

The Superdome has outlasted seven other domed stadiums from the AstroTurf era that have come and gone, even surviving Hurricane Katrina that forced the Saints to play elsewhere in 2005. The spaceship-like building, which opened in 1975, has hosted seven Super Bowls. At the last one, six years ago, Baltimore beat San Francisco after a 34-minute power outage darkened the stadium and halted the game.

Opened in 2002 for the Seahawks, this stadium quickly became the loudest outdoor facility in the league behind an ardent fan base known as the "12th Man" and a unique rainbow truss design that traps in the crowd noise.

The first stadium with construction costs that passed the $1 billion price tag, AT&T Stadium opened for the Cowboys for the 2009 season in the suburb of Arlington with a massive, center-hung, high-definition videoboard as the premier attraction among many Texas-sized amenities. The Super Bowl was held there in the stadium's second year, infamously remembered for the temporary sections that weren't completed in time for the big game and ultimately left 400 ticket holders without seats in the quintessential first-world problem.

Opened in 2016 for the Vikings and host of the second-highest scoring Super Bowl following the 2017 season, US Bank Stadium became the NFL's first facility with a translucent roof . The world's largest pivoting glass doors add to the outdoor feel for the indoor stadium.