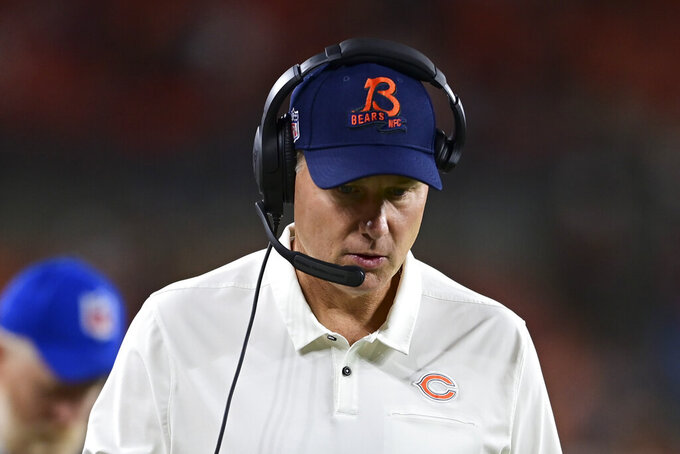 Chicago Bears head coach Matt Eberflus walks the sideline as his team plays against the Cleveland Browns during the second half of an NFL preseason football game, Saturday, Aug. 27, 2022, in Cleveland. (AP Photo/David Dermer)

LAKE FOREST, Ill. (AP) — The San Francisco 49ers advanced to the NFC championship game last season, and they believe they have the playmakers to make another big playoff run.

The Chicago Bears are starting over with a new general manager and coach.

Though the two teams are in far different places, they do have something in common. Both are relying on second-year quarterbacks, and all eyes figure to be on Trey Lance and Justin Fields when the 49ers and Bears meet in the opener at Soldier Field on Sunday.

“Trey is in as good a spot as I’ve been around him,” 49ers coach Kyle Shanahan said. "He’s confident, had a good camp, got as many reps as he has ever gotten before. Has been thrown in a ton of tough situations, some good situations and now it’s time to go play.”

The 49ers have been building for this since they traded three first-round picks to draft Lance with the No. 3 overall pick in 2021 out of FCS school North Dakota State.

He spent most of his rookie season backing up Jimmy Garoppolo. The Niners decided to hand him the keys this season, hoping his athleticism and big-play ability would open up the offense.

There could be calls to go back to Garoppolo, who took a big pay cut to remain in San Francisco, if Lance struggles. But if he delivers the way the 49ers hope, that won't be an issue.

“Just getting into my routine," Lance said. “It’s been awesome this week and a little bit of last week just to be able to kind of nail that down for this week.”

Fields, meanwhile, needs to take a step forward and show new Bears general manager Ryan Poles and coach Matt Eberflus he's the one who can stabilize the position.

The former Ohio State star struggled as a rookie last year after Chicago traded up to grab him with the No. 11 overall pick. He finished with more interceptions (10) than touchdown passes (seven), along with an unimpressive 73.2 rating.

The Bears went 6-11 and missed the playoffs for the ninth time in 11 years. Poles didn't make any splashy additions to an offense that ranked among the NFL's worst last season.

“If we get off the ball, we all do our jobs and execute well, then our offense is really good,” Fields said.

Eberflus is getting good reviews so far from Poles, as well as the players. But it remains to be seen how he'll fare once the games begin.

The 52-year-old Eberflus is in his first head coaching job after three decades as an NFL and college assistant. He was Indianapolis’ defensive coordinator the past four seasons.

“Somebody once said that those situations are like snowflakes, they’re all different,” Eberflus said. "Time, timeouts, score, all that, field position, I think it’s important that we keep educating ourselves so that we do a good job on gameday.”

The biggest offensive question for the 49ers comes on the interior of the offensive line, where they are projected to start three players with three career starts. Center Jake Brendel, who entered the league in 2016, started his only three games in 2018 in Miami. Left guard Aaron Banks barely played as a rookie and right guard Spencer Burford won the job after being drafted in the fourth round out of Texas-San Antonio.

The Niners are in better shape at tackle with All-Pro Trent Williams anchoring the left side and Mike McGlinchey back after on the right side after missing the second half of last season with a quadriceps injury.

Chicago's Roquan Smith is ready to start the season for "The Monsters of the Midway" after a turbulent training camp.

The star linebacker opted to “hold in” at the start and requested a trade with negotiations on a contract extension going nowhere. He practiced for the first time on Aug. 20 and did not play in the preseason.

After spending the offseason working out and honing his pass-rushing skills rather than rehabilitating from knee surgery, Niners star edge rusher Nick Bosa appears poised for a big season.

Bosa bounced back from missing almost all of the 2020 season by recording 15 1/2 sacks last season. He has looked even better in camp this summer after a long offseason of work back home in Florida with his brother Joey.

The Bears and Niners will play on new turf after Bermuda grass was installed this week instead of the usual Kentucky bluegrass.

A switch like that probably wouldn't draw much attention elsewhere. But in Chicago, where the choppy conditions at Soldier Field have frustrated the Bears and opposing teams for years, it's a different story.

The new grass figures to be tested with rain forecast for Sunday.