Lane Johnson returns to practice with the Eagles 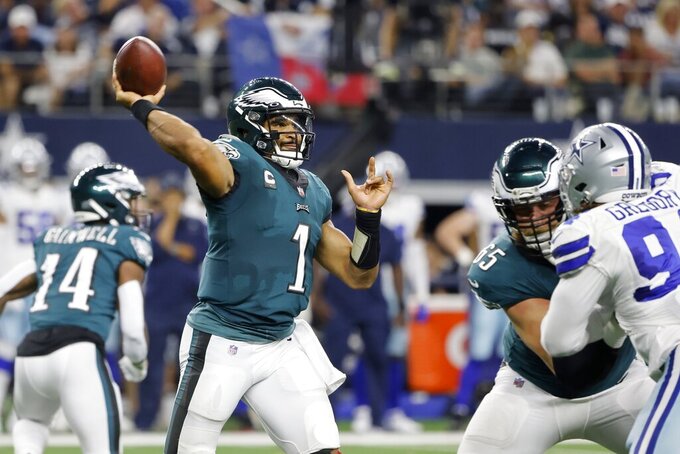 PHILADELPHIA (AP) — Three-time Pro Bowl right tackle Lane Johnson returned to practice with the Philadelphia Eagles on Wednesday after missing the last three games because of a personal matter that he revealed was related to anxiety and depression.

“Depression and anxiety are things I’ve dealt with for a long time and have kept hidden from my friends and family. If you’re reading this and struggling, please know that you are not alone,” Johnson wrote on Twitter on Monday.

Johnson’s teammates and coaches have emphasized their support for him.

“Anything our players deal with, we want to be there for them,” first-year Eagles coach Nick Sirianni said. “That’s what we’ve based everything on, is this first of our core values, of connecting.”

Jordan Mailata, who moved over from left tackle to the right side to replace Johnson, said it’s “bloody great” to have him back.

“He just brings us a morale boost that — it’s needed, especially how we’re going right now,” Mailata said Mailata. “Glad we have him back, glad he’s doing well.”

The Eagles (2-4) have lost two of three games since Johnson left to return to Oklahoma hours before they played Kansas City at home on Oct. 3.

The offensive line is already missing both starting guards. Left guard Isaac Seumalo is out for the season and three-time Pro Bowl right guard Brandon Brooks remains sidelined by a chest injury.

Against the Chiefs, Jack Driscoll pivoted to right tackle after practicing all week at right guard, with backup Nate Herbig subbing in at right guard. For the next two games, Mailata switched sides, Driscoll went back to right guard, and 2019 first-round draft pick Andre Dillard started at left tackle.

The Eagles listed Johnson as a limited participant in his return to practice; Sirianni said it was because of the layoff, not an injury. It seems likely Johnson starts this week with Mailata moving back to left tackle, but neither Sirianni nor Mailata was ready to confirm that.

The line’s performance without Johnson wasn’t poor, but second-year quarterback Jalen Hurts hasn’t seemed too comfortable in the pocket. Hurts has been criticized for bailing out early and relying on his legs instead of going through progressions.

“When it’s going well. ... he’s taking his drop (in) rhythm, he is being able to sit in the pocket, and able to throw it on time. If something breaks down, he scrambles and gets out of it and makes a play,” Sirianni said. “I feel like when it’s not going well is when he’s quick to escape. ... You don’t want to take his super power away, of escaping and making plays on the run, but we just do want to make sure. ... we lessen the gap of off-schedule plays and drop-back plays.”

Told of Sirianni’s comments and asked what he needed to do, Hurts said: “Stay in the pocket and make the throw.”

Hurts blamed himself rather than Sirianni’s play calling.

“It’s me. It’s something I hold myself accountable for,” he said. “We have different situations, different things come up. No one sees what I see out there, but I’ve got to go out there and execute; that’s my job.”

NOTES: TE Dallas Goedert remains on the COVID-19 reserve list after missing one game. ... The Eagles re-signed TE Richard Rodgers to the practice squad and released tackle Casey Tucker. ... With Zach Ertz traded to Arizona, undrafted rookie Jack Stoll is the only healthy tight end on the roster. He has yet to catch an NFL pass. Rodgers and Noah Togiai are on the practice squad. ... The Eagles started the 21-day practice window Wednesday for undrafted rookie TE Tyree Jackson (back) and S K’Von Wallace (shoulder).