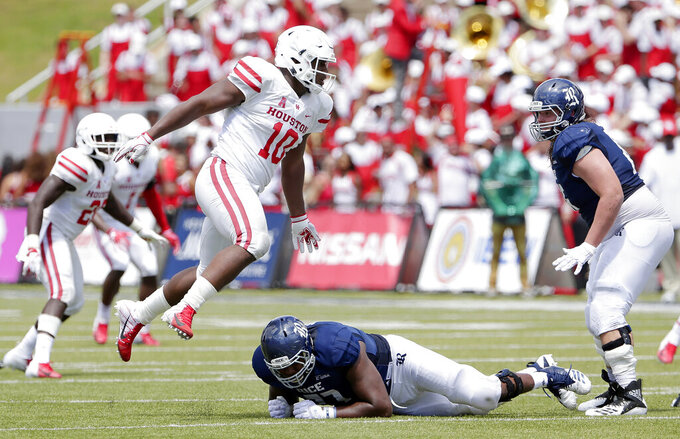 ORCHARD PARK, N.Y. (AP) — Coming off a 17-player haul in free agency, Brandon Beane has plenty of options entering the NFL draft. And the Bills general manager isn't going to restrict himself to focusing on one or two positions when it comes time for Buffalo to make the No. 9 selection.

Name a position outside of quarterback, after Buffalo selected Josh Allen with its first pick a year ago, and Beane won't rule it out. And that includes an offensive lineman, even though Buffalo added seven newcomers already this offseason.

"I wouldn't say it's less likely, no. I think there's some good ones," Beane said.

"Guys, I'm serious. We're taking the best player," Beane added, before noting he and his scouting staff will hold several in-house mock drafts to prep for the draft. "I feel confident that we'll get a good player at nine. And I'll be curious how these mocks go, but I can see a lot of scenarios of (selecting a player from) either side of the ball."

With that in mind, it wouldn't be out of the question for Buffalo to select an offensive tackle such as Florida's Jawaan Taylor, should he be available. Then there's the option of the Bills addressing their defensive line with Houston tackle Ed Oliver, or adding a pass-rusher, such Michigan's Rashan Gary.

Tight end, a position long lacking in production in Buffalo, might even be on the table with Iowa's T.J. Hockenson being linked to the Bills in various mock drafts.

Beane's point is Buffalo's roster is in a much better place when it comes to competitive depth and salary structure entering his third year. The change is the result of Beane spending the past two years purging high-priced contracts and underperforming players, and rebuilding through youth by stockpiling draft picks.

The overhaul resulted in the Bills taking a step back in going 6-10 a year after a 9-7 finish in which they sneaked into the playoffs to end a 17-year drought.

The benefits were evident a month ago. With more than $70 million in salary cap space available, Beane took an aggressive approach by filling numerous needs in free agency. He focused mostly on surrounding Allen with more talent by upgrading what had been a patchwork and inexperienced offense.

After center Mitch Morse, the most notable additions were receivers Cole Beasley and John Brown, who join a relatively untested group of receivers made up of Zay Jones and Robert Foster.

With a defense that allowed the second-fewest yards in the league returning mostly intact, the expectation now is for Allen to build off a promising finish to his rookie season and help the Bills take the next step toward being a contender.

Coach Sean McDermott isn't buying into the notion the newcomers make the Bills any better.

"Right now, they're just names on paper," McDermott said. "What we have to do is find a way to bring these names that are on the paper and bringing them to life."

The Bills have 10 selections, with seven spread over the final four rounds. With only one second- and third-round pick, it makes it difficult — but not impossible — for Buffalo to move up in the first round as it did twice a year ago. Don't rule out the Bills combining their later-round picks to trade up should the opportunity present itself.

Beane spent the first round last year maneuvering up the draft board. He traded up five spots to select Allen with the No. 7 pick, and then moved up six draft positions to select Virginia Tech linebacker Tremaine Edmunds at 16.

Asked about how many times his in-house mock draft finished with Buffalo landing both Allen and Edmunds, Beane said: "I think we were zero for zero."

Though he always considered the likelihood of trading up to select Allen, not once did he consider being in a position to move up and select Edmunds. "We always made a pick at 22 or, we used that pick to move up, so we didn't have it," he said.

With defensive tackle Kyle Williams retiring after 13 seasons, the Bills have five players left who were on the roster since coach Rex Ryan's final year in 2016.

And of those five, defensive end Shaq Lawson (a first-round pick in 2016), is the lone player drafted by Buffalo who remains. Defensive end Jerry Hughes, acquired in a trade in 2013, is now Buffalo's longest-serving active player.

Beane doesn't consider drafting a running back a high priority even though Buffalo's backfield currently features 30-year-old LeSean McCoy and 35-year-old free-agent addition Frank Gore. The GM said if he doesn't select a running back, there are still several free-agent prospects available.