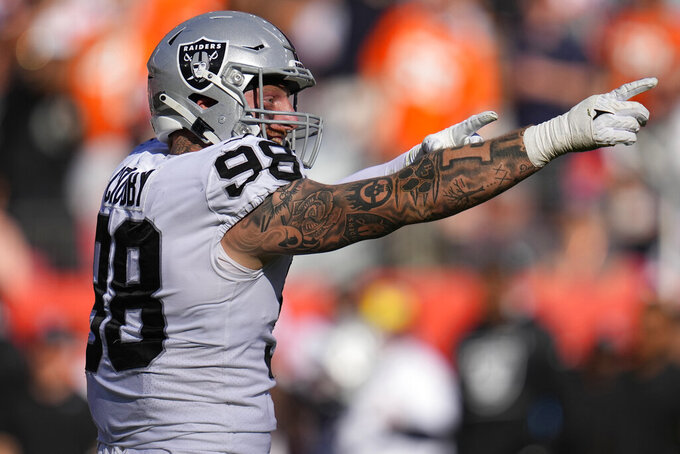 DENVER (AP) — The Las Vegas Raiders were determined not to let Jon Gruden's undoing lead to their own downfall.

They delivered an emphatic 34-24 victory in Denver for longtime special teams coordinator Rich Bisaccia, their interim head coach, snapping a two-game skid and propelling them into a first-place tie with the Chargers atop the AFC West.

“In this business there’s always crazy things going on, especially with the Raiders,” said defensive end Maxx Crosby, who was in on all five sacks of Teddy Bridgewater.

"There’s no mistake about it. Ever since I got here there’s always things going on. These guys we have in this building are resilient, from the coaching staff to the players to the trainers, everybody has a positive outlook on this organization,” Crosby said.

The outside chatter was loud and clear, too, he said.

“Everyone’s talking, ‘What are the Raiders going to do? Is the season over?’ We’ve heard all of it," Crosby said. "For us to have a great week of practice and go out there and play good football, it’s a testament to all these guys in the locker room.”

Gruden apologized last weekend for racist comments he made about union chief DeMaurice Smith, and the Raiders were flat in a home loss to Chicago. But by Monday night, Gruden had tendered his resignation after it was revealed his old emails also disparaged gays, women and others in the NFL, including Commissioner Roger Goodell.

“Sometimes when you get punched in the gut it’s hard to bounce back, but we were able to do it," said Derek Carr, who picked apart the Broncos' beleaguered secondary with seven passes of at least 25 yards on his way to a 341-yard masterpiece that included a 48-yard TD toss to Henry Ruggs III.

Offensive coordinator Greg Olson was masterful in his first play-calling duties for Las Vegas since Carr’s rookie season in 2014.

“I thought it was great,” Carr said. “He had a great flow to the game, the communication and tone in the helmet, there are so many little things that matter to quarterbacks. He was giving the plays to me so early so I had time at the line of scrimmage to go fast or push the tempo or trick them.

“For everything he had to deal with this week and then being thrust into calling plays for the first time in a while, I thought he crushed it. He was awesome.”

The Raiders began the post-Gruden era with Ruggs' long touchdown catch that ended an 11-game streak without a score on their opening drive and they never let up.

Carr scoffed at the notion the Raiders would fold without Gruden, who was in the fourth year of a 10-year, $100 million contract when it all unraveled for him a week ago.

“I'm still here as a leader,” Carr said, rattling off the veteran teammates that were right there with him: Crosby, Yannick Ngakoue, Darren Waller, Josh Jacobs, Alec Ingold.

“I’m going to stop naming guys before I forget,” he concluded. "We still have our room of guys, our leaders. More now than ever, we needed to step up and be a voice. It’s fair to think that way, with everything going on.

“There will be a time to deal with the emotions of all that, but now is not the time," Carr added. “If anything, it brought us closer.”

The Raiders (4-2) moved into a first-place tie in the AFC West with the Chargers, who were blown out by Baltimore, and are one game ahead of the Kansas City Chiefs and the reeling Broncos, losers of three straight after starting out 3-0 like the Raiders.

This victory was special "I think more for the organization as a whole, Carr suggested. "For us in the locker room, I know it sounds funny, but we compartmentalize things. We have a job to do. If anything, it heightened our intensity, heightened our focus. It brought us closer.

“But the win is a win. For the organization, it feels different for some people, but for me, you guys know me by now, I felt a certain way, but I had a job to do. Everyone felt that way, so when we won, it was, ‘Yes! Let’s go!’ But for the front office and other people in the organization, it was special, I’m sure.”