Late-picking Bengals may look to draft for defensive depth 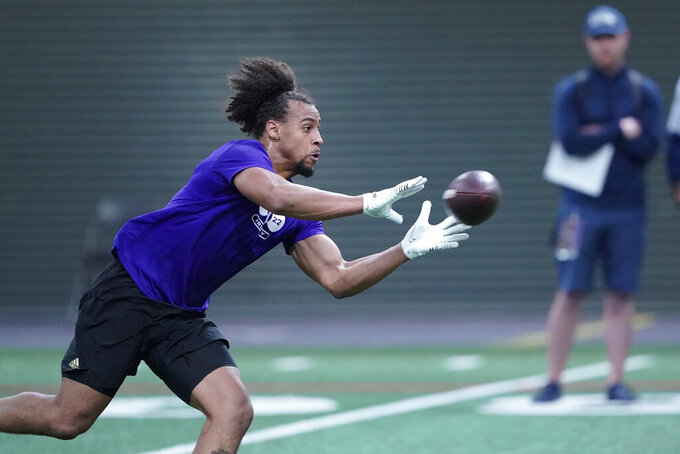 CINCINNATI (AP) — The Cincinnati Bengals aren't used to this, picking so late in the NFL draft.

They had early picks in the past two drafts, and the stakes were huge. Not so much this time.

As the Super Bowl runner-up, Cincinnati has the 31st pick. Its first-round selection this time won't grab headlines like taking Heisman Trophy-winning quarterback Joe Burrow with top overall pick in 2020, and then getting his former LSU teammate Ja’Marr Chase with the fifth overall pick in 2021. They were the two best players on the team last season, with receiver Chase being voted Offensive Rookie of the Year.

The Bengals, who made a stunning run to their first Super Bowl in 33 years, still have some needs not addressed through free agency, but the holes are less gaping than in the recent past.

“I think the universe expands a little bit when you’re (drafting) later," said Duke Tobin, Cincinnati’s director of player personnel. “So maybe there’s a little bit more of a broad pool to choose from, the guys who are available late as opposed to the small universe of guys who are really worth the top of the draft. We feel good about our ability to analyze who’s available and how they would impact our team early.”

The Bengals wasted no time addressing their biggest need when they snagged three offensive lineman out of the free-agent pool — guard/center Ted Karras, right guard Alex Cappa and right tackle La’el Collins — with the hope that a retooled line can keep Burrow upright and healthy.

Burrow was sacked 70 times in 20 games last season and his body showed it by the time Los Angeles Rams star defensive tackle Aaron Donald pulled down Burrow on the team's last offensive play of the Super Bowl.

DEFENSE COULD BE PRIORITY

With three new veteran starters on the O-line, the Bengals may look to the draft for some defensive depth after offseason moves left them thin at a couple of positions.

“It’s a good-bad problem to have, to be picking that late,” said Mark Dominik, a former NFL executive and SiriusXM analyst. “I think that with the Bengals it’s new territory for them, and they’re looking at it like it’s almost a second-round pick instead of a first-round pick.”

Dominick thinks the Bengals will focus on defense.

The Bengals cut oft-injured cornerback Trae Waynes and re-signed Eli Apple, who had some big moments last year but also was inconsistent. They are looking for somebody to compete with Apple for a starting job and play next to Chidobe Awuzie. Late first-round possibilities there include Clemson's Andrew Booth Jr., Washington's Kyler Gordon and Florida's Kaiir Elam.

Todd McShay, an NFL draft analyst at ESPN, said he expects Booth to be gone by the time Cincinnati is on the board so the more likely candidate is Gordon.

“He can play slot, and he can play outside, and I think that’s right around where he’ll get picked, late first, early second,” McShay said.

SOMETHING TO THINK ABOUT

McShay believes the Bengals should grab Iowa center Tyler Linderbaum with their first pick if he's still available at 31. Linderbaum won the Rimington Trophy last season as the best center in college football, and McShay believes he could come in and beat out the veteran Karras for the starting job. That would also allow Karras to shift back to guard.

“He’s going to step in and be a high-end center from day one, technically sound, excellent athlete, great range on pulls and traps, second-level blocks," McShay said of Linderbaum. “And also he’s got power to his game and is a nasty finisher. I think he would be an upgrade (for the Bengals) at the center position.”