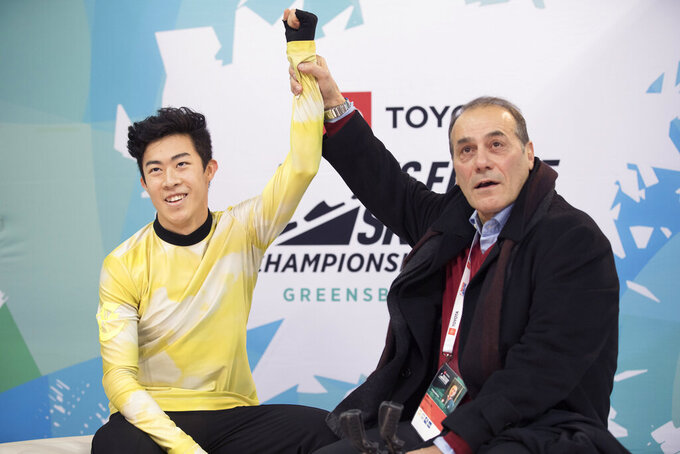 The Latest on the effects of the coronavirus pandemic on sports around the world:

The Southwestern Athletic Conference has postponed its fall athletic competition because of the COVID-19 pandemic and hopes to hold a shortened football season during the spring semester.

The SWAC Council of Presidents and Chancellors announced the decision Monday amid an increase of coronavirus cases in the South. Fall sports impacted include men’s and women’s cross country, football, women’s soccer and women’s volleyball.

The SWAC is planning to play a seven-game schedule in football after an eight-week training period that starts in January. Each team would play six league games with the option to play one nonconference game.

Plans for the other sports and the football championship game will be announced later.

Athletes will be able to attend classes, training and practices in the fall.

ESPN and the Milwaukee Journal-Sentinel first reported that Connaughton said he had tested positive and hadn’t yet joined the team in Florida.

The NBA-leading Bucks earlier had acknowledged that starting point guard Eric Bledsoe had tested positive and hadn’t accompanied the team to Disney’s Wide World of Sports, where the NBA will resume its season later this month after a 4 ½-month hiatus because of the pandemic.

Budenholzer is cautiously optimistic both players will be with the team when they face the Boston Celtics on July 31 in the first of their eight seeding games.

“We’re fully expecting them and very hopeful,” Budenholzer said. “With this virus, you never know.”

Connaughton sent out a tweet Monday that didn’t specifically mention the coronavirus but said, “Thanks for the thoughts & prayers. Feeling great and looking forward to being back with the squad soon... luckily I always have a basketball in my apartment - sorry to the people living below me.’’

The Mountain West has postponed its football virtual media days which were scheduled for July 27-29.

The league didn’t say when the online event would take place, saying only that “any future decisions and announcements will take place at the appropriate time.”

Several Mountain West teams had scheduled strong Power-5 opponents to kick off the non-conference portion of their schedules only to see those games get canceled.

Colorado State, for instance, saw its games against rival Colorado and Oregon scuttled when the Pac-12 decided to play only conference games this season in light of the coronavirus crisis.

The Mountain West still plans to release its predicted order of finish this week along with its preseason all-conference teams and preseason players of the year.

The Washington Nationals announced Monday that Fauci -- a self-described fan of the reigning World Series champions -- accepted the team’s invitation to have the pregame honor Thursday.

The Nationals will host the New York Yankees to open the season nearly four months after it originally was scheduled to begin.

The University of Texas says it anticipates hosting football games this season at 50% capacity in the stands.

Texas said it’s still preparing for the season to start Sept. 5 at home against South Florida. The Big 12 has not yet said if it will duplicate moves by the Big Ten and Pac-12 to play only conference games. South Florida plays in the American Athletic Conference.

Texas’ Royal-Memorial Stadium holds about 100,000, although that figure was going to be reduced slightly this season because part of the stadium is undergoing renovation.

Even with limited capacity, the school said it expects to offer all season ticket holders a chance to get tickets.

Georgia's governing body for high school sports has pushed back the start of football season for two weeks, until the week of Sept. 4.

The Georgia High School Association still plans for a full 10-game regular season and a full playoff schedule. Other fall sports will start on time. The delay was needed for several school districts, including Atlanta public schools, which have pushed back the start of the school year due to the coronavirus pandemic.

The association’s board of trustees voted 8-4 against a proposal to keep the current sports calendar. The subsequent vote was unanimous to push back the football opening schedule by two weeks. The opening games had been planned for the week of Aug. 21.

The New York Jets and Giants announced they will not have fans at home games this season “until further notice” because of the coronavirus pandemic.

The teams, who play at MetLife Stadium in East Rutherford, New Jersey, and have separate training facilities in the state, released a joint statement Monday after Gov. Phil Murphy announced an executive order limiting outdoor public gatherings to 500 people.

The Jets and Giants say the decision to not have fans - at least for now - was reached after discussions with Murphy, with the health and safety of fans, players and staff being considered.

The teams also announced that “out of an abundance of caution,” fans will not be able to attend training camp practices this summer.

In the statement, the NFL clubs said they will continue to work with Murphy’s office as the situation is reviewed and evaluated, but “until circumstances change, both the Jets and Giants will play our games without the benefit of fans in attendance.”

Rutgers University, in Piscataway, announced that all of its athletic venues will operate with 500 or fewer in attendance and safety precautions will be in place for those fans who come to sporting events there.

The NHL says only two players tested positive for COVID-19 during the first five days of training camp last week.

The league, in consultation with its players, is not revealing the identity of players who test positive, or their teams. The two players who tested positive are self-isolating per national and local health protocols.

A total of 2,618 tests of more than 800 players from July 13-17 were done by the league. Training camps opened July 13, with 24 teams preparing to compete in an expanded playoff format in Toronto and Edmonton, Alberta, starting on Aug. 1.

Teams are scheduled to travel to both hub cities on Sunday.

The NHL reported it had 33 players test positive during the period after the league paused its season in March to the start of camps.

California’s governing body for high school sports said Monday that the 2020-21 seasons will begin no earlier than December.

The California Interscholastic Federation said the normal fall, winter and spring sports seasons will be condensed into two seasons.

Decisions by state and local health authorities will determine whether games are actually played .

Gov. Gavin Newsom has issued strict guidelines that will require most of California’s 6.7 million K-12 students to at least start the coming school year with online classes.

The Pac-12 has postponed its football media days.

The league said Monday the move is the result of the Pac-12's decision to schedule league-only games this season and to delay mandatory athletic activities.

The event, originally set for July 29-31 in Los Angeles, will be held at a later date to be decided.

The University of Louisville says it suspended men’s and women’s voluntary swimming activities for two weeks on Saturday after three members of the program tested positive for COVID-19.

A university news release issued Monday did not specify whether those impacted are student-athletes or staffers. It says all three have been quarantined, with procedures and protocols being followed.

Twenty-seven swimmers and divers have returned to campus in three phases for training.

One University of Oklahoma women’s basketball player has tested positive for COVID-19, and a second player has been deemed a close contact.

Oklahoma made the announcement in a news release on Monday. Both players are in quarantine off campus.

Oklahoma re-opens its facilities to members of the men’s and women’s basketball teams on Monday.

The International Skating Union has canceled the Junior Figure Skating Grand Prix for the upcoming season.

Citing increased travel and entry restrictions, the international governing body for the sport said Monday it could not sanction the series. The ISU also said the potential extensive sanitary and medical care measures, including possible quarantine, “would put an unsustainable burden on the organizers.”

The ISU has not made a decision yet on the senior series that features the top skaters, including current world champion Nathan Chen and two-time Olympic champion Yuzuru Hanyu.

Potential international junior events could be held if “the pandemic developments and situation change and allow for the safe organization” of them. The ISU said it would provide financial assistance for such events, with preference given to venues that were a part of the canceled series.

The ISU Council will meet online on Aug. 3 to further evaluate events for the 2020-21 season.