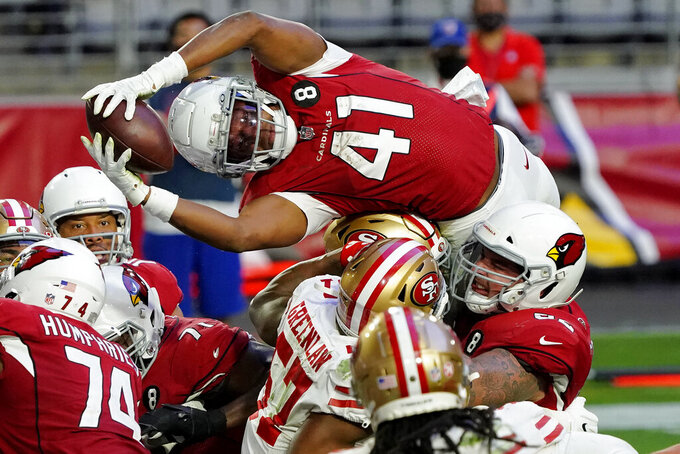 FILE - Arizona Cardinals running back Kenyan Drake (41) dives over the line for a touchdown against the San Francisco 49ers during the second half of an NFL football game in Glendale, Ariz., in this Saturday, Dec. 26, 2020, file photo. The Las Vegas Raiders have agreed to a two-year deal worth up to $14.5 million with free agent running back Kenyan Drake to complement starter Josh Jacobs. A person familiar with the deal says Drake will be guaranteed $11 million under the deal agreed to on Thursday, March 18, 2021. The person spoke on condition of anonymity because the deal hasn't been announced. (AP Photo/Rick Scuteri, File)

Now that the muzzles have been removed for NFL team executives and the players they either re-signed or added in free agency, Thursday was a time for explanations and reflections.

Wentz was the headliner, in great part because of the perceived nastiness of his split with the Eagles, who got two draft picks from Indianapolis for their once-franchise quarterback. Wentz took the high road in his Zoom news conference.

“Anytime you hear those things you want to play detective and figure out who said it. But it really doesn’t matter,” he said of anonymous comments in Philadelphia during and after the season ended. “If it’s out there, then you have to ask yourself how can I learn from it? It’s unfortunate people have those opinions and if any of my teammates didn’t think I was the best teammate, I apologize. I wish I could have been better.”

The Colts expect Wentz to be the right successor to the retired Philip Rivers.

“I can’t emphasize how strongly I feel Carson is the man for the job for the Colts at this time,” team owner Jim Irsay said. “I really think he can be that guy that’s going to be the centerpiece for the next decade who can give the Colts a chance at greatness.”

Fitzpatrick joins his ninth team in his soon-to-be 17th pro season, and he's never been to the playoffs. He left Miami, which has its likely franchise QB in Tua Tagovailoa, for DC, where there is an opening, particularly after NFL Comeback Player of the Year Alex Smith was released.

“It’s me. That’s part of my story," the quarterback nicknamed FitzMagic said. "Part of my story is skipping around to different teams and just trying to instill belief and just show that passion to these guys. ... Every time I go to a new place, it’s just a new opportunity. It’s just a new adventure, a new journey for me, and I kind of get to reinvent myself every year on a new deal and I have to prove myself again.”

One of several additions to the Cardinals, Green got a one-year deal worth around $8 million. The star wideout missed the entire 2019 season (ankle injury) and his production was down in 2020 when the Bengals went 4-11-1.

“I feel like I have a lot left in the tank,” said Green, who will be joined in the desert by center Rodney Hudson, kicker Matt Prater and, oh yeah, edge rusher and three-time NFL Defensive Player of the Year J.J. Watt. “I still feel young. My legs feel young. Last year was a difficult year for me playing with three different quarterbacks and coming off an injury. But I wouldn’t change that for anything in the world. I think that made me a better person on the field, mentally stronger."

Pushing to upgrade a blocking unit that was overwhelmed by Tampa Bay in the Super Bowl, the Chiefs got two of the best guards of recent seasons.

Long will earn $5 million for 2021, a year after he regained “physical, mental, emotional composure, get my feet back under me” in retirement

“Just watching from the side, such an explosive offense," Thuney said. “Never out of the game, never out of the fight, always got a chance, can score from anywhere on the field it seems.”

The 31-year-old Wolfe gets $12 million over three years. He played 14 games with eight starts for Baltimore after signing a $3 million contract to join the team from Denver. He had one sack, six tackles for loss, 51 total tackles and four quarterback hits on the season.

“I wasn’t sure if I was even going to get the chance to play football again with the cap being the way it was,” Wolfe said of the $16 million decrease in the salary cap. "I was like, ‘Well, maybe they’re going to just bet on these young players and count on the draft.’ So, I really wasn’t sure what was going to happen, but I’m really excited to be back.”

The 26-year-old Williams, twice-franchised, got a three-year, $63 million contract coming off his best pro season.