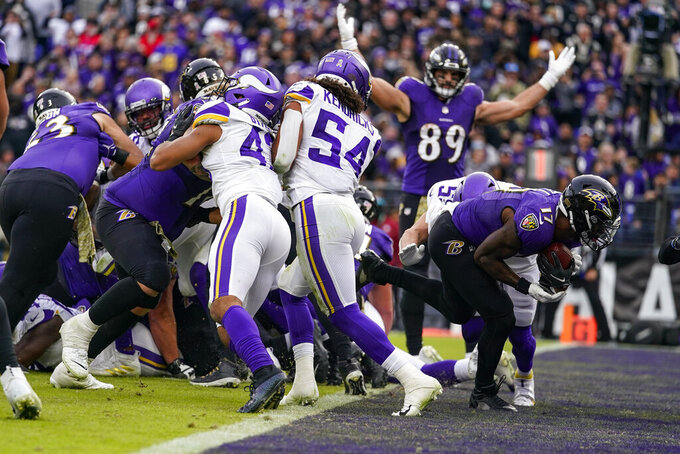 Baltimore Ravens running back Le'Veon Bell (17) scores a touchdown as he is hit by Minnesota Vikings outside linebacker Nick Vigil (59) during the second half of an NFL football game, Sunday, Nov. 7, 2021, in Baltimore. (AP Photo/Julio Cortez)

Bell was one of three veterans the Ravens picked up after losing running backs J.K. Dobbins and Gus Edwards to preseason injuries. Baltimore also brought in Latavius Murray and Devonta Freeman, and Bell had the fewest carries of the three even though Murray has missed the past three games with an ankle injury.

The 29-year-old Bell rushed for 83 yards on 31 carries for the Ravens. He did run for two touchdowns.

“This hurt, but it’s been a blessing to be here to say the least,” Bell said on Twitter. “I’ve enjoyed every second of this short period.”

Now Bell's career is at another crossroads. He rushed for more than 1,000 yards three times in five seasons for Pittsburgh, then sat out the whole 2018 season in a contract dispute. After signing with the New York Jets, he rushed for 789 yards in 2019.

Bell was cut early last season by the Jets. He then rushed for 328 yards in 11 games with Kansas City, but he did not play in the Super Bowl for the Chiefs.

The Ravens also announced the release of tackle Jaryd Jones-Smith from the practice squad Tuesday.