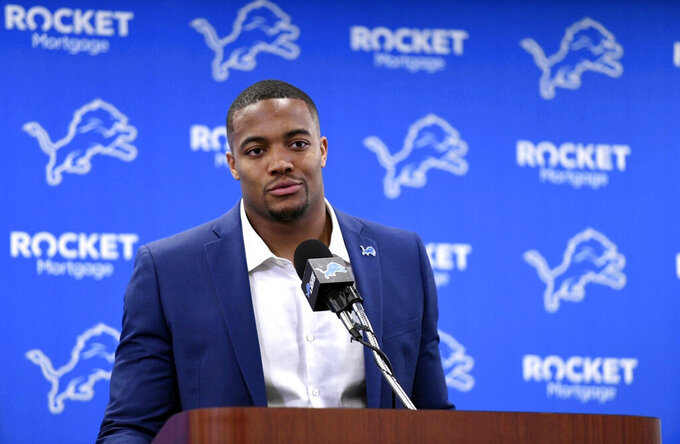 "She's been fortunate to be at three Super Bowls. She has known that her daddy played for the Patriots," Flowers said. "I just kind of hinted it to her: 'What if daddy is a Lion? Do you like lions?' "

Flowers' daughter Skyler was apparently a bit skeptical, but the 25-year-old defensive end says her favorite color is blue. So that's a start. The big question is whether there will be any more Super Bowls in Flowers' future. The Detroit Lions have never been to one, but they can hope that the three free agents they introduced Thursday will bring them a step closer.

The Lions introduced Flowers, cornerback Justin Coleman and tight end Jesse James at their practice facility on Thursday. Detroit needed an edge rusher like Flowers because the oft-injured Ziggy Ansah was on the open market after playing with the Lions on the franchise tag last year.

Like a lot of Lions, Flowers and Coleman have ties to the New England Patriots. Flowers had a career-high 7 ½ sacks last season for the Super Bowl champions and 21 over the last three years in New England. The Patriots drafted him in the fourth round out of Arkansas in 2015.

Flowers joins a defensive line that got a boost in the middle of last season when Detroit traded for tackle Damon Harrison . Flowers says he hopes he can blend in and be a good teammate.

"I think that's very important — a new guy coming in, to just kind of gain the trust from his teammates and things before he kind of just comes in and acts like he knows it all," Flowers said.

Coleman started his career in New England in 2015, when Bob Quinn and Matt Patricia — the Lions' current general manager and coach — worked for the Patriots. Coleman became a standout nickel cornerback over the last two seasons in Seattle.

Coleman went to Brunswick High School in Georgia, the same school as Detroit cornerback Darius Slay and Lions defensive back Tracy Walker. Slay turned 28 in January. Coleman is 25 and Walker is 24.

"I got a couple years with Darius. It was great playing with him," Coleman said. "We never knew that we were both going to get to this point, but in high school he was one of the best players that was on the field. He kind of just motivated me to get on the field and play a lot more. He kind of helped me along the way, just being the leader that he is. I tried to just compete with him, just so I could get better myself."

The Lions were looking to upgrade their options at tight end a year after releasing Eric Ebron. James had 120 receptions for 1,189 yards and nine touchdowns in four seasons with the Pittsburgh Steelers.

"Offensively, I wasn't used the way that I feel like I could be used here. I feel like my ceiling here is going to be much higher than it was in the past," James said. "I feel like I'm coming here, I'm going to be a key part of this offense. In Pittsburgh, I was a key part, but I think my role here could be greater."

Although James is hopeful this move will be good for his career, he's leaving his home state. He was born in Pennsylvania and went to Penn State.

"It's a hard place to leave," James said. "I grew up in Pittsburgh. My dream was to be a Steeler. I got to do that for four years. Didn't get the job done — never got to bring a Super Bowl to Pittsburgh — but my time there was a success. I've gotten a lot better, grew as a football player."

Adams spent the 2018 season with the Tampa Bay Buccaneers, playing in 13 games and making four starts. He played in two seasons for the New York Giants prior to that.