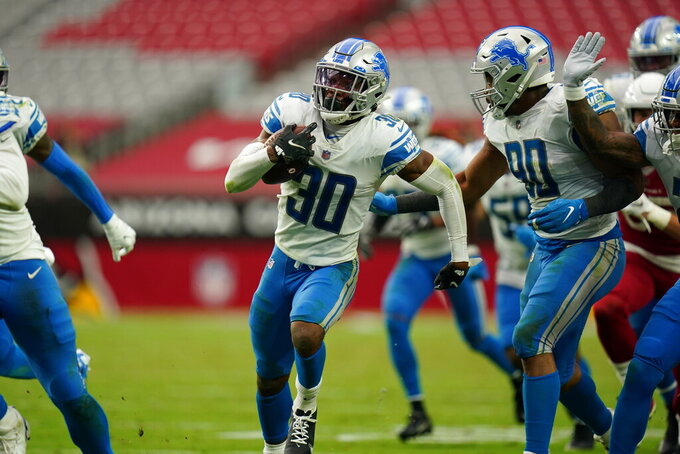 Detroit Lions cornerback Jeff Okudah (30) running with the ball during a NFL football game against the Arizona Cardinals on Sunday, Sept. 27, 2020 in Glendale, AZ. The Lions defeated the Cardinals 26-23. (Detroit Lions via AP).

ALLEN PARK, Mich. (AP) — Even though Detroit Lions coach Matt Patricia had to wait 11 months to experience the thrill of victory, he insisted relief didn't describe his feelings.

“I think it’s hard to exist in this world of competitive football if you ride that roller coaster because I think when you do that, you just hope it stops when you’re at the high point and not the down point."

The Lions looked like they might be headed for rock bottom after an 0-2 start. They prepared for their road game against the Kyler Murray-led Cardinals amid questions about how much longer Patricia would keep his job.

Detroit, though, scored first as it has in each game this season and finished strong for a change.

Matthew Stafford led the Lions to victory for the 35th time in his career when were they tied or behind in the fourth quarter or overtime. Matt Prater's field goal as time expired gave Detroit a 26-23 win.

“It felt really, really good," defensive end Romeo Okwara acknowledged. “It has been way too long since we got a win."

Patricia didn't want to dwell on the result the following day, nor did the embattled coach want to reveal his personal emotions.

“Just happy for the players," he said. “In the locker room, you could just feel the joy."

Painful losses, including 11 after leading in the fourth quarter, have marred much of Patricia's tenure and added up to his 10-24-1 record.

Patricia hopes to prepare the Lions (1-2) well enough this week to beat New Orleans (1-2) at home Sunday and win consecutive games for just the third time in two-plus seasons.

Adrian Peterson. The 35-year-old gained 27 yards on his first carry and finished with 22 rushes for 75 yards along with a catch for 10 yards.

Red zone offense. The Lions have scored six touchdowns in 13 drives in the red zone.

“We settled for field goals in the red zone too often," tight end Jesse James said. “We got to find a way to get it in."

James suddenly became part of the passing game, making three catches for 28 yards and a touchdown against Arizona. James did not have a reception in the first two games this year and averaged one catch per game in 2019 in a scoreless first season with the team.

James didn't want to celebrate his relatively big day, but was happy about the desperately needed result for the team.

“To get that win was huge for us," he said. “We definitely needed it."

Detroit signed Halapoulivaati Vaitai to a $45 million, five-year contract to start at right tackle. After missing the first two games with a foot injury, Vaitai started at right guard against the Cardinals. He struggled in pass protection, including late in the game when he was called for holding to negate a long pass to the Arizona 1.

Veteran cornerback Desmond Trufant, who signed a $20 million, two-year deal in the offseason, missed his second straight game with a hamstring injury

3 — Detroit's defense intercepted Murray three times after the unit didn't have one takeaway during the first two weeks of the season.

Rookie Jeff Okudah has to get in better shape — quickly. The cornerback, drafted No. 3 overall, appeared to leave the game at Arizona at least twice because he was winded.

“He just has to settle down and keep working on his conditioning to get back out there and be out there when needed," Patricia said.