Lions-Texans practice a reunion for Patricia and O'Brien 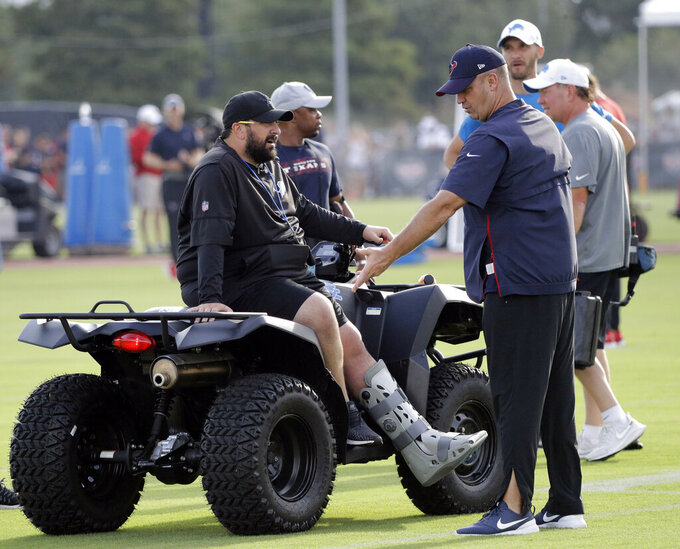 HOUSTON (AP) — Wednesday's joint practice between the Texans and Lions was a reunion for Houston coach Bill O'Brien and Detroit coach Matt Patricia.

The two worked as assistants with the New England Patriots from 2007-11.

O'Brien said the first of two practices between these teams before Saturday's preseason game ran like clockwork.

"He and I, we go back a long way, coached together in New England, didn't really even have to meet about this," O'Brien said. "We just knew how it would work. It was smooth operation."

O'Brien and Patricia have remained close friends from their time working together under New England coach Bill Belichick, and Patricia said it was easy to fall right back into their old routine when they got back together on Wednesday.

"We spent a lot of time together at New England," Patricia said. "He was the offensive coordinator, I was the defensive coordinator. It's funny when we get into practices like this, it's just like old times kind of: 'Hey what do you want to do this period? Let's do this. How many reps here? What does this look like?'

"That conversation comes right back to what we did a long time ago."

The teams went through about a two-hour practice on Wednesday morning in which they conducted drills separately early in the day before working together. Patricia, recovering from offseason leg surgery, zipped around from field to field on a four-wheeler, and O'Brien was seen standing near his ATV and chatting with him several times during practice.

It is the second consecutive week both teams have held joint practices. The Texans worked out with the Packers for two days last week before Thursday's preseason opener at Green Bay. Detroit hosted Belichick and the Patriots for two workouts in advance of the team's first preseason game on Thursday.

Houston quarterback Deshaun Watson and Lions signal caller Matt Stafford took many of the snaps in Wednesday's workouts. They both made some nice passes, with Stafford connecting with first-round pick T.J. Hockenson on one long throw.

The Lions believe that chasing around dual-threat quarterback Watson for a few days this week will help them prepare for their season opener when they'll meet Arizona and Kyler Murray, last year's Heisman Trophy winner and the top overall pick in this year's draft.

Along with dealing with the Texans, the Lions were also fighting the weather conditions Wednesday. Where they normally practice in Allen Park, Michigan, temperatures are usually in the low to mid-70s in the mornings. In Houston on Wednesday temperatures soared to above 90 degrees with high humidity by the time practice wrapped up just before 11 a.m.

Patricia said he and his staff have been getting the team ready for the conditions for a while.

"Making sure that we're doing a good job with our players to hydrate and to make sure they are prepared," he said. "We've tried to stress that through the last 48 hours or so through the travel. Obviously getting on the plane, that dehydrates you, too. ... We're just going to have to do a really good job of monitoring everything. I've talked to coach O'Brien at length about taking his guidance and his lead as far as the heat is concerned because he is obviously in tune with it a little bit more than we are."

Patricia said it's not only important to be cognizant of the heat's effect while practice is going on, but also later in the day and evening as they prepare for a second day in the conditions Thursday.