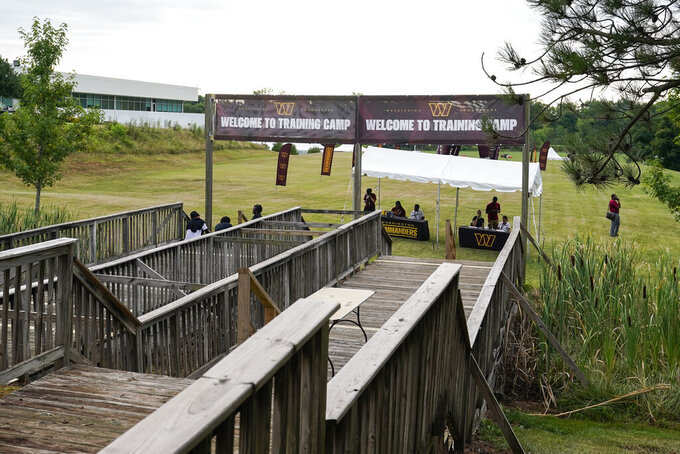 Training camp signs are up for the start of the Washington Commanders practice at the team's NFL football training facility, Wednesday, July 27, 2022 in Ashburn, Va. (AP Photo/Alex Brandon)

ASHBURN, Va. (AP) — Jonathan Allen has been part of a handful of training camps with Washington that begin with loud questions about what might be next for the once-storied NFL franchise.

The veteran defensive tackle insists he lets any criticism go in one ear and out the other.

“The outside noise doesn’t really affect me,” he said. “I would like to assume that it doesn’t affect most of the guys out there because we’re all professionals and we know how to handle our business.”

This camp — the first with the team known as the Commanders — seems like Allen's kind of vibe. After an offseason of distractions from a congressional investigation into workplace misconduct to an assistant's comments about the insurrection at the U.S. Capitol that drew a sizable fine and may have contributed to scuttling a deal for a new stadium, there's not much in the neighborhood of on-field drama for Washington.

The football side of the team is fairly set with Ron Rivera going into his third season as coach, Carson Wentz entering as the unquestioned No. 1 quarterback and few starting spots up for grabs.

“It’s good because there’s no doubt,” Rivera said Wednesday after the first practice of camp. “When you’ve got most of your core positions set, you’re not having to run guys in and out. You can just go ahead and line those guys up and play.”

Go out and play is what Allen and his teammates would like to do, coming off a second consecutive seven-win season and missing out on the playoffs in 2021. Owner Dan Snyder may or may not testify (virtually and not publicly) before the U.S. House Committee on Oversight and Reform Committee on Thursday, and defensive coordinator Jack Del Rio calling the Jan. 6 riots “a dust-up at the Capitol” dominated headlines during the spring, but players can now put their heads down and focus on preparing for the season.

He's not alone. Wentz got goosebumps walking into the facility Tuesday for his seventh NFL season as he does every year at this time.

This is his third different team's camp in as many years after trades from Philadelphia to Indianapolis and then to Washington, though after several offseason workouts he already feels right at home as the Commanders starter.

“It’s been a fun adjustment, a new adjustment from the moment we got here in the spring and just kind of stayed the course,” Wentz said. “Today was fun to get back out there and officially kick it off the right way.”

Camp kicked off as expected with pass rusher Chase Young, tight end Logan Thomas and centers Chase Roullier and Tyler Larsen sidelined by injuries that landed them on the physically unable to perform list. One early hiccup was the absence of running back Antonio Gibson from team drills because of a hamstring injury that first cropped up last month.

Gibson worked out on a side field during practice.

“He’s fine, but we’re going to ramp him up,” Rivera said. “We’re not going to throw him out right away and have something happen. We want to make sure there’s nothing lingering. I’d almost call that an abundance of caution.”

There's an abundance of optimism at many camps around the league before a single game is played, but Allen is also cautious about getting too comfortable with the calm around Washington.

Entering his sixth season, he has the ability to drown out the drama but also isn't sleeping on the fact that the situation around the Commanders could be markedly different in the coming days and weeks.

“One thing about the NFL is every day can change,” he said. “I’ve got a job to do and we get paid to do it.”

One thing contributing to the lack of major questions is the team paying top receiver Terry McLaurin on a three-year extension that can be worth up to $71 million. McLaurin caught a deep pass from Wentz in the opening practice of camp, and second-year tight end Sammis Reyes saw smiles all around, something he's accustomed to with this group.

“We get along with each other,” Reyes said. “There’s a great sense of family here that starts at the top — from the top down. I hope it reflects in our game.”