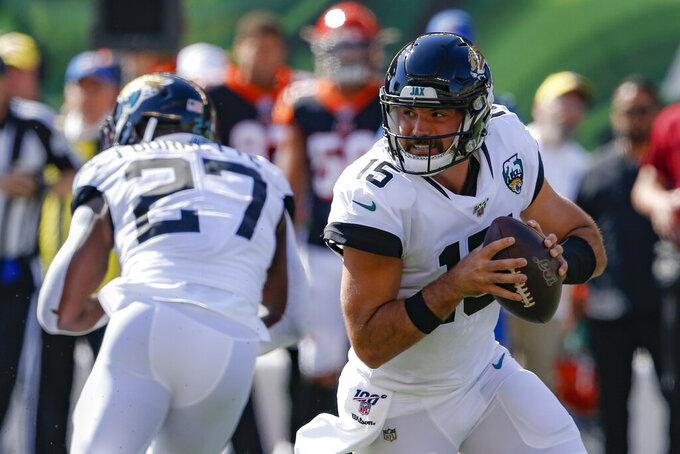 Deshaun Watson skipped the World Series finale to get ready for his Wembley Stadium debut.

It was an easy decision, too.

Watson was scheduled to make the "play ball" call before Game 7 in Houston on Wednesday, but instead opted to take the night off and prepare for the 8,000-mile trip across the pond to face AFC South rival Jacksonville in London.

The star quarterback felt his body needed extra rest. Watson's left eye remained bloodshot and slightly swollen Wednesday after getting kicked in the face against Oakland.

The Texans (5-3) expect him to be considerably better by game time Sunday. The Jaguars (4-4) might be even more convinced. After all, Watson rode a bus 800 miles to Jacksonville last year because of concerns about how cabin pressure would affect his bruised lung and injured ribs.

He then threw a touchdown pass in Houston's lopsided victory. He's now 3-0 as a starter against Jacksonville, including a one-point victory in September.

"He's playing like an MVP candidate. He really is," Jaguars coach Doug Marrone said. "What does he have, 16 touchdown passes, five rushing touchdowns? He can scramble. He can get away. I mean, it's amazing his escape-ability.

"I don't know what he doesn't do well. I really don't. ... I'm sure you guys all have fantasy football teams. But if you had a real football team and you wanted to put a ball in someone's hand at the end of the game, he'd be the guy you probably would want to put it into. It's going to be a great challenge for us."

Slowing down Watson might give Jacksonville its best chance to win at historic Wembley, where the small-market franchise is playing a "home game" for the seventh consecutive year.

The Jags won two straight to close out October and four of six, but they have failed to reach 30 points in 20 consecutive games.

Jacksonville's defense has been stout the past three weeks, holding New Orleans, Cincinnati and the New York Jets to 13, 17 and 15 points, respectively.

He's the first quarterback in NFL history with at least 15 touchdown passes and five rushing scores in his first eight games of any season. And his TD pass last week to tight end Darren Fells after getting kicked in the eye had Jacksonville coaches and players shaking their heads.

"He makes plays when you're supposed to have them," veteran defensive tackle Abry Jones said. "In clutch situations, he's coming up big for his team. He's turned into one of the top quarterbacks in the game."

Watson's eye has gotten as much attention this week as maybe that more famous one in London.

"It looks bad. It's going to look worse before it actually gets better, but I'm actually good," he said. "I'm all good."

He will consider wearing a visor against Jacksonville, which has sacked him 15 times in four games.

"We're just kind of going with the flow and seeing how the week kind of goes," Watson said. "I've worn a visor before. It's not a big deal, but it's something that we'll know as the week continues."

Minshew Mania might be coming to a close. Jaguars rookie sensation Gardner Minshew will make his seventh consecutive start, but will it be his last this season? Marrone already has acknowledged he will have a difficult decision to make when Nick Foles (broken collarbone) returns from injured reserve next week.

The Texans will be without star defensive end J.J. Watt , who sustained a season-ending injury to a pectoral muscle against the Raiders. It's the third time in the past four seasons that the three-time NFL Defensive Player of the Year has ended up on injured reserve.

Despite having a career-salvaging season, Jaguars running back Leonard Fournette is in a red-zone slump.

Fournette has 31 carries for 34 yards and a touchdown inside the 20-yard line in eight games, including four carries for minus-6 yards and a score inside the 5. He expressed his frustration last week after offensive coordinator John DeFilippo called a pitch play on second-and-goal from inside the 1. Fournette lost 7 yards and yelled at the sideline as he trudged off the field.

The Texans have won 14 of the past 18 in the series, a lopsided stretch that includes winning streaks of five, six and three (current).