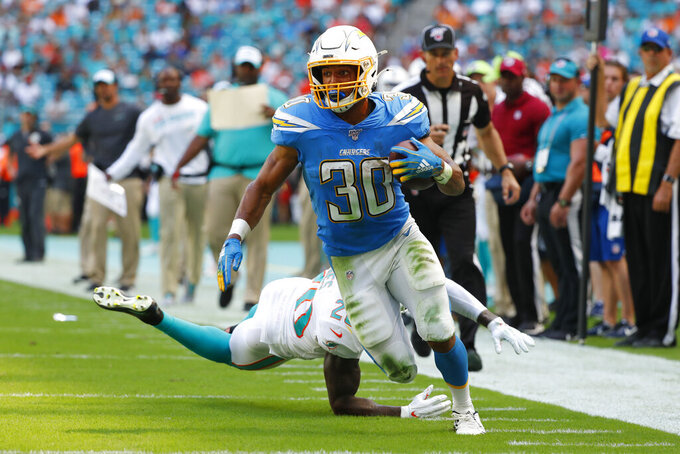 Miami Dolphins free safety Reshad Jones (20) misses a tackles as Los Angeles Chargers running back Austin Ekeler (30) runs for a touchdown, during the first half at an NFL football game against the Miami Dolphins, Sunday, Sept. 29, 2019, in Miami Gardens, Fla. (AP Photo/Wilfredo Lee) 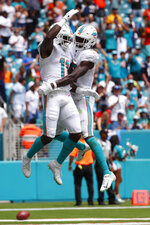 The 37-year-old quarterback hadn't been born yet the last time the Chargers won a road game versus the Dolphins, which made Sunday's 30-10 victory especially sweet, even if it came against a team off to a historically bad start.

Rivers compounded Miami's misery by throwing for 310 yards and two scores. He completed 24 of 30 attempts with no interceptions and directed a 10½-minute drive in the third quarter that helped Los Angeles take control.

The Chargers (2-2) had lost eight games in a row in Miami. Their last victory came in an overtime playoff thriller in January 1982 that's regarded as one of the greatest games in NFL history.

"It has been a long time," Rivers said. "Myself, I haven't played worth a hoot there the last two times. Rough days for us. It was good to win."

The Dolphins (0-4) held a lead for the first time this season, but it lasted only 3 minutes, 49 seconds. They've been outscored 163-26 this season, which is the NFL's worst four-game point differential since at least 1940.

"We could have played a lot better," rookie coach Brian Flores said.

The Chargers, who never punted, led 17-10 and scored on their first three possessions of the second half to take command. The Dolphins have been outscored 81-0 in the second half this season.

"We're not getting the job done," Miami cornerback Xavien Howard said. "We've got to come out with more energy in the second half."

Austin Ekeler scored one touchdown receiving and another rushing. Chargers running back Melvin Gordon was active after reporting this week and ending his holdout, but he didn't play.

"I'm glad we won by a big margin; it would have been tough sitting there if we were losing," Gordon said. "I'll be out there next week."

With Los Angeles kicker Michael Badgley sidelined by a groin injury, punter Ty Long handled place-kicking duties and made fields of 44, 45 and 51 yards. But the list of injuries grew longer for the hobbled Chargers.

"Obviously we've got a lot of injuries," Rivers said. "A lot of guys went down during the game, and we were able to overcome it all."

Miami's Josh Rosen threw for 180 yards and a touchdown, but had an interception and was sacked four times. Desmond King led Los Angeles' defensive charge with 2½ sacks, a tackle for a loss and two quarterback hits.

Los Angeles started slowly — not surprising for a team that traveled 2,500 miles to kick off at 10 a.m. California time. Rosen threw a 34-yard touchdown pass to DeVante Parker to give the Dolphins their second touchdown and first lead of the season, 7-3.

Los Angeles quickly answered with a 75-yard scoring drive. Ekeler turned a short reception into an 18-yard touchdown in the final minute of the first half to put the Chargers ahead to stay.

They chewed up most of the third quarter with a drive that produced a field goal for a 20-10 lead.

ROOTING FOR THE OTHER TEAM

Chargers center Mike Pouncey played against his former team for the first time. He spent his first seven NFL seasons with the Dolphins before they released him in March 2018, and said he's sorry to see them go through the pains of rebuilding.

"Hopefully they can turn this thing around," Pouncey said. "I'm going to live in South Florida the rest of my life and support the Dolphins, so I want to see a winning product on the football field."

Dolphins: WR Jakeem Grant went to the sideline with a hamstring injury.

HAVE YOU HEARD THE NEWS?

Chargers: They play host to Denver on Oct. 6. The Chargers had a six-game winning streak snapped last year when they lost at home to the Broncos 23-22 on a last-second field goal.

Dolphins: They have a bye before playing host to Washington on Oct. 13. The Redskins are 0-5 at Miami, with the most recent game in 2011.