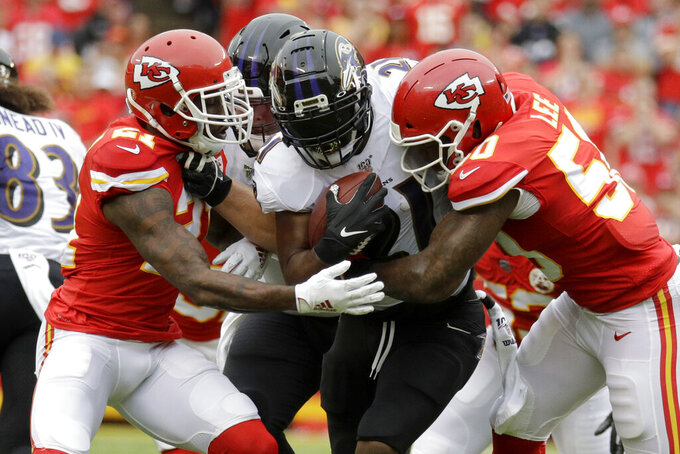 That's precisely how Ingram performed as a Heisman Trophy winner in 2009 at Alabama and for eight productive years with the New Orleans Saints. So it comes as no surprise to Jackson that Ingram is running wild in his first season with Baltimore.

"I've been seeing him do it since college. That's why he was the Heisman winner," Jackson said Wednesday. "He was doing it at the Saints, he's doing it here. He's all you want in a back. He can block, do it all."

Signed as a free agent in March, Ingram has provided the Ravens with a secondary option to Jackson, a budding star who's proficient with his arm and a threat with his legs.

Ingram leads the NFL with five touchdowns, ranks fifth with 257 yards rushing and already has a pair of 100-yard games. Against Kansas City last week , he averaged 6.4 yards per carry and scored three TDs in a 33-28 defeat.

"I've just been able to run," Ingram said. "They've given me some space. I've been able to break some tackles and make some things happen."

When free agency began last March, the Ravens and Ingram made a connection in an instant. Baltimore immediately targeted the physical, 5-foot-9, 210-pound star as an upgrade to the backfield, and Ingram was eager to join a team as the featured back after sharing carries in New Orleans with Alvin Kamara in 2018.

"The Ravens wanted me, I wanted to be here and that's just kind of how it worked out," Ingram said.

With Jackson and Ingram leading the way, Baltimore (2-1) owns the NFL's top-ranked offense and most prolific rushing attack (216.7 yards per game). The Ravens will be counting on more of the same Sunday in an AFC North showdown with Cleveland (1-2), the only other team in the division with a victory.

This is Freddie Kitchens' first year as Cleveland's head coach, but he's well aware of what makes the Ravens tick and how Ingram has fit perfectly into their run-first attack.

"It will be a physical game. They always try to create that," Kitchens said. "Everything kind of runs through (Jackson) and Mark. Mark has stepped right in and kind of takes on our mantra of being physical. He is downhill, physical-type runner that can make you miss in space, so we have our work cut out for us defensively."

Being a physical running back means blasting through the initial defender as if he wasn't even there. Asked his mindset at first contact, Ingram replied, "Just to keep going."

When it comes to hitting or getting hit, Ingram insists upon being the one to dole out the punishment.

"Since Little League, you never want to let the first guy tackle you," he said. "Creating extra yardage, that's what you have to do as a running back."

The 29-year-old Ingram is older than most of his teammates and has seven years on Jackson. So while the quarterback provides a measure of leadership in the locker room, Ingram is the one who speaks from experience.

"I had high expectations for Mark coming in. He was a target for us in free agency and he decided to be here," coach John Harbaugh said. "He's done the job. Not just how he's playing, but he's also doing it as a leader and a mentor. He shows guys how hard and physical you can play."

Armed with a three-year contract, Ingram is just getting started.

"I feel like I have a lot more in the tank," he said. "So I have to continue to improve and do better. I'm not being satisfied or complacent."