A look at the seminal broadcasting moves that define the NFL 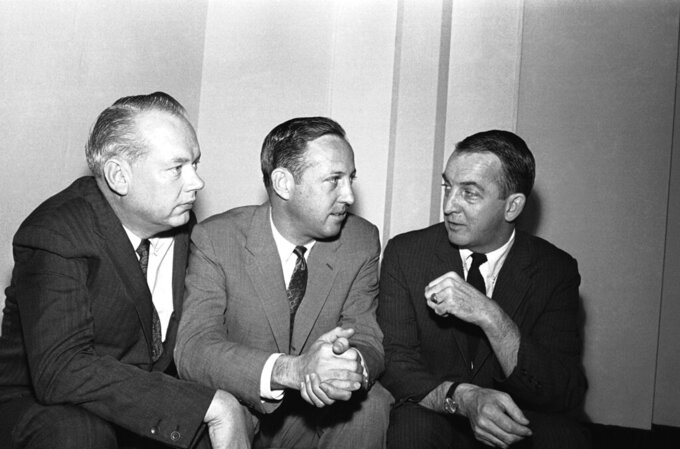 FILE - In this February 1966 file photo, NFL commissioner Pete Rozelle, center, discusses a new television contract for championship games with Bill MacPhail, left, vice president of CBS-TV, and John Reynolds, president of CBS-TV network, in Palm Beach, Fla. Pete Rozelle would not be surprised to see the NFL’s impact of television as it celebrates its 100th season this year. It was Rozelle, the commissioner from 1960 to 1989, who was able to convince owners that it was in their best interest to sign a leaguewide rights deal instead of teams negotiating on their own. (AP Photo/File)

Pete Rozelle would not be surprised to see television's impact on the NFL as the league celebrates its 100th season this year.

It was Rozelle, the commissioner from 1960 to 1989, who was able to convince owners that it was in their best interest to sign a league-wide rights deal instead of teams negotiating on their own. The NFL's two-year deal with CBS signed in 1962 went for $4.65 million per season. Every contract has grown since then to where the current deals with CBS, NBC, Fox and ESPN is worth $5.66 billion annually through 2022.

Rozelle was a visionary but no one knows if he could have seen the league turn into a financial juggernaut that has its own network and countless hours of programming per week dedicated to what is happening on and off the field.

"Television has been the best marketing tool that we've had," said Joe Browne, who was a league executive for 50 years before retiring in 2016.

NBC "Sunday Night Football" announcer Al Michaels said a huge reason for the league's popularity on television is because it is the best-suited sport for it.

"You have this burst of action and then there is inaction that can be covered by analyzing the play and covering it on replay," he said.

College football and baseball had been the top two sports throughout the 1950s, but the tide started to turn after the 1958 NFL championship game between the Baltimore Colts and New York Giants. The first overtime title game in league history was called "The Greatest Game Ever Played" and vaulted the sport into popularity.

Seven years later, the Harris Poll had professional football as the nation's favorite sport for the first time.

A look at some of the defining events that have shaped the NFL and television:

EQUAL FOOTING FOR EVERYONE

Rozelle convinced Wellington and Jack Mara (Giants), Dan Reeves (Rams) and George Halas (Bears) that a single contract covering all teams and splitting the revenues benefited everyone. That meant the Packers and Giants would be receiving equal shares, instead of the old deals where New York sometimes got as much as 10 times more than Green Bay.

"We were able to do it because the owners thought league. All of the franchises have remained viable and have the means to compete with the rest of the league. That's what I think all sports should be," Rozelle said in David Harris' 1986 book "The League".

Rozelle originally had a deal with CBS in 1961, but it was voided by a federal judge due to antitrust laws. Rozelle went to Congress and was able to get them to pass the Sports Broadcasting Act, which allows leagues to negotiate broadcast deals.

Browne said trying to get owners to pull together resources for television would have been harder to do later. At the time, ticket sales were still the higher revenue source.

"They (Mara, Reeves, Halas) made decisions that perhaps were not good for their individual teams in the short term, but in the long run paid off for the entire league," he said.

NBC lost out on the NFL but would agree to a five-year deal with the AFL beginning in 1965. Not only did that provide the upstart with more cash, but it would help set in motion the merger between the two leagues.

Another reason for the league becoming more popular in the 1960s, '70s and '80s was NFL Films. With most of the highlights narrated by "The Voice of God" John Facenda, great cinematography and booming symphony music, Ed and Steve Sabol's work made football players seem larger than life.

It also made them human. "Football Follies" is one of the company's most popular series, but it almost never saw the light of day. Browne said he saw the pilot and said there was no way the league would go along with it.

Ed Sabol then was able to arrange for a meeting with Rozelle to look at it.

"Pete said to give them a chance because he said it was important to give creative types a benefit of a doubt. It gave a new look at the games much to the enjoyment of fans," he said.

The success of NFL Films spawned a multimedia league conglomerate that includes NFL Network, which went on the air in 2003.

Rozelle started shopping a prime-time package of games on Monday night to networks in 1969. CBS and NBC turned him down due to the success of their shows, but Rozelle did have leverage with ABC, which was clearly the third-place network and was struggling in prime time.

The network agreed to pay $25.5 million for three years. ABC Sports President Roone Arledge, knowing that the game would be viewed by a more diverse audience compared to Sunday games, placed Howard Cosell with former Dallas quarterback Don Meredith and Keith Jackson. A year later, Frank Gifford replaced Jackson and the three-man booth would become one of the most entertaining in league history.

It also quickly became one of the most popular programs on television.

"The genius of putting games in prime time on 'Monday Night Football' was one of the milestone decisions — along with the merger and start of the Super Bowl — that are significant and helped the growth of the game," Browne said.

When "Monday Night Football" moved to ESPN in 2006, it was one of the longest-running series in television. But as former CBS Sports President Neal Pilson likes to point out, ABC agreeing to air the games at first was one of self-preservation.

"Pete went to ABC and said if they didn't buy the package that he would directly negotiate with ABC affiliates to air them," Pilson said.

ESPN celebrates its 40th anniversary next month, but one of the seminal dates in the network's history happened on March 15, 1987, when it won rights to the NFL's first cable television contract.

The network aired 13 games in each of the first three seasons — four preseason, eight Sunday night during the second half of the year and the Pro Bowl. The league also gave ESPN unlimited highlight rights, which turned into the one-hour show "NFL Primetime."

The league expanded Sunday night games to the full season in 1990 when it awarded rights to TNT for the first half and ESPN for the second half. That remained in place for eight seasons until ESPN bought the full Sunday night package beginning in 1998. Eight years later, Sunday nights went to NBC and ESPN took over "Monday Night Football."

ESPN's Chris Berman said there were some concerns from owners about whether the network could handle the NFL. But a month before the rights were awarded, it was the America's Cup sailing competition in Australia that convinced everyone that they were ready because of the level of production and graphics.

"It meant we were here for good and legitimized every ounce of sweat we put out for eight years," Berman said. "The league took a risk and at the same time put us on the map."

Fox's bid of $1.6 billion over four years for NFC games in December 1993, dramatically altered the sports and television landscape.

Fox ushered in the one-hour pregame show and had an ethos that "football is entertainment". Besides bringing a free-wheeling vibe to its coverage, it also added to the level of production with audio that brings viewers closer to the game and the time and score box.

"Fox upped the ante in terms of dollars and production value. I give Fox a good deal of credit for improving game telecasts," Browne said.

Michaels noted that throughout the 1960s, '70s and '80s, announcers were minimalists when it came to describing the action. That was not the case with "Monday Night Football" and when Fox started doing games in 1994.

"Fans know so much more now, and it is up to the announcers to provide it," he said.

Fox knew what having the NFL meant in terms of turning the big three networks into the big four, but it also showed what not having it can do. CBS saw affiliates move to Fox and prime-time ratings plummet due to not being able to have NFL games to promote its programming.

"I told (CBS chairman) Laurence Tisch that if we lost the NFL it would wreck CBS, but he said he didn't want to lose money on the NFL anymore," Pilson said. "We lost affiliates, the male audience and ratings for '60 Minutes' cratered. Four years later they went back to the league and it was name your price."

NBC did not have the NFL from 1998 to 2005, but it came back in 2006 with the "Sunday Night Football" package. It did mark a culture shift for the league because it now aired its significant prime-time game on Sunday instead of Monday.

To make that work, NBC Sports president Dick Ebersol asked for flexible scheduling late in the season, so that they could get the best late-season matchups if the one they had did not have postseason significance.

The flex games have been such a success, that NBC can adjust matchups beginning in Week 6.

"As someone who did 'Monday Night Football', I didn't understand how the league was going to make Sunday night more significant and how it would be viewed," Michaels said. "But we have been the top-ranked show on television for eight straight years."

Not many people envisioned Thursday night as a prime football night too, but Fox is paying more than $600 million to air those games through 2022.